Why Play Guitar When The World Is On Fire?

Home News Why Play Guitar When The World Is On Fire?

Why Play Guitar When The World Is On Fire?

Practicing and playing music is good for ourselves and others.

There’s a famous phrase, “Nero fiddled while Rome burned” which expresses the idea of totally missing the point in a moment of crisis. It’s based on the story of the famously depraved and ineffective Emperor playing his violin on the walls of Rome as a great fire swept the city.

According to the Encyclopedia Britannica, this story isn’t literally true, since violins didn’t develop for another thousand plus years. However, it is quite possible that Nero played a cithara during the fire, which was an early version of the lute–which in turn evolved into the guitar. Shakespeare referenced this in Henry IV when he wrote:

…I will; and like thee, Nero, Play on the lute, beholding the towns burn.

Yep, Nero blew it. Let’s not be like Nero.

But…what if a healthy and positive response to living in a world that sometimes seems full of what is wrong includes a regular practice of sitting down with your guitar?

In this blog, I’m going to explain two reasons why you and I might want to play music now more than ever:

Practicing Music Increases Your Well Being

The science is clear. Practicing music makes you feel better.

According to a survey of dozens of research papers published by the National Institutes of Health and a report in Psychology Today, practicing music:

Music even does this differently and more effectively than other forms of relaxation. For example, one study demonstrated that while practicing music, calligraphy, or clay molding all lowered cortisol and anxiety, practicing music produced the greatest reduction in stress. A similar study found that stress reduction was more significant in music players compared with people who simply “relaxed, read magazines or solved puzzles.”

And playing music doesn’t just bring “less bad”–according to an article in the Daily Telegraph, learning to play an instrument also increases the size and activity of the parts of the brain controlling motor skills, hearing and memory and can even “improve day to day actions such as being alert, planning and emotional perception.”

So whether you’re trying to change the world, or just make it through the day–or both–picking up your guitar and practicing will help!

As guitarists, we think of a chord as a set of notes which sound good when they are played together.  Discord is a musical term meaning notes which clash with each other, which seem unpleasant or require resolution. It also means strife, conflict, friction and hostility.

The opposite of discord is harmony, which musically occurs when individual musical tones or voices group together to form a cohesive whole.

Yet these incredibly different instruments from around the world combine to make beautiful music. And so do the unique people playing those instruments, influenced by musical innovations and trends from hundreds of years ago, or yesterday, and expressing and grappling with emotions and as old as Homo Sapiens and issues as recent as right the heck now.

I grew up white and homeschooled and Mormon in rural Idaho, and I’ll always love where I’m from. But from the time I was a teenager, I dreamed of moving to New York City.  I wanted ideas, experiences and people who were not familiar to me to be around me–and to be in me.

Music was my ticket to connect with others. I’ve jammed and played with hundreds of other people, in bars, clubs, rehearsal rooms and apartments all over the city. And the business I started, NYC Guitar School, has allowed me to interact personally with hundreds and in a wider sense with thousands of unique and varied New Yorkers. This wide exposure has given me a stronger sense of myself, while I hope and believe also helping me become more aware of and open to the experiences of others.

The thing I miss most about the physical, pre-lockdown, NYC Guitar School is passing through the lounge when students are waiting for their class. I love seeing and hearing so many different dedicated music lovers, all showing up to learn and creating a musical tapestry with their varied warm ups. There always seems to be one beginner steadfastly practicing a G chord string by string and finger by finger (and perhaps a bit out of tune!)–and usually there is someone else shredding through some scales at high speed. They are both loving music and they are both learning. I love that!

After all these years, I still look around New York City in amazement at the tall buildings and the incredible diversity of people and ways of being. I hear different accents and languages. And I’ve got to tell you, I’m still blown away. I still love it. It’s a symphony.

When I pick up my guitar and play, I believe that I am part of that music and when I make music together with other people, I know we are creating something beautiful together.

Playing guitar can’t be the only thing we do to survive, thrive and create change in our challenging and imperfect world.

But playing music does help foster harmony within ourselves and with each other.

So take a deep breath and pick up that guitar!

Playing Music Is Good For Your Health

The Fascinating Benefits of Playing Guitar

5 Remarkable Benefits of Music Listening to Positively Impact Your Health

About the Author
Dan Emery is dedicated to Coaching Personal Greatness, One Lesson At A Time. He is the founder of NYC's friendliest and fastest growing guitar schools, New York City Guitar School, Brooklyn Guitar School, Queens Guitar School and NYC Guitar School, East, and the author of the Amazon best-selling Guitar For Absolute Beginners and six other books on learning guitar and deliberate practice. He coaches new entrepreneurs through the Entrepreneurs Organization Accelerator program and especially enjoys helping other Educational Entrepreneurs. He has a Masters in Education from Columbia University Teachers College, extensive performing experience as songwriter and guitarist for The Dan Emery Mystery Band, a wife, three kids, a cat and some juggling equipment.
Social Share
2 Comments 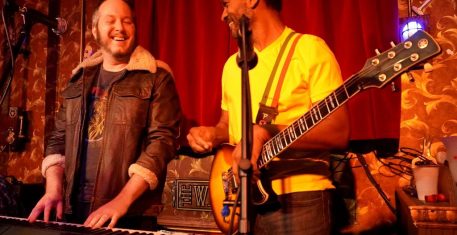