The Greatest Songwriters of the Sixties

Home News Premium Members The Greatest Songwriters of the Sixties

The Greatest Songwriters of the Sixties

Get Started Now. View Upcoming Classes
Recently NYC Guitar School students were asked to rate 12 songwriters of the sixties in five categories. Those categories were –

The results are in and they are… actually pretty predictable. Check it out!

Lennon / McCartney took the prize in every category but great lyrics (though they obviously scored very high all around). Lennon and McCartney were also on the list separately as solo artists but they were no match, divided, for the brilliance that they were together. They’ll get a chance to battle it out again when we do “Great Songwriters of the 70’s”. Then, of course, there will be no Lennon / McCartney. (click chart to enlarge) 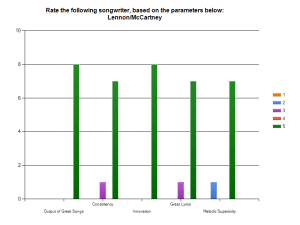 Bob Dylan?came in second having been beat out in every category by the Beatles duo except for great lyrics. Who could argue that right? Dylan is arguably the greatest lyricist of all time!?(click chart to enlarge) 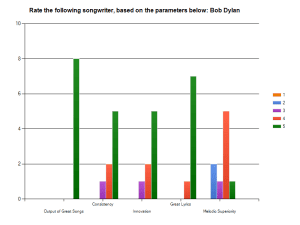 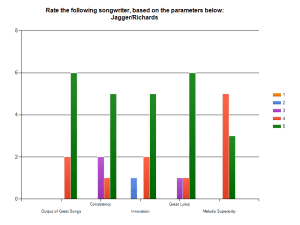 If you follow us on Facebook you may already know that this topic resulted in a heated online debate. Unfortunately, I didn’t think people would take the time to rate more than 10 – 12 artists so we had to keep it pretty mainstream. The next survey “Greatest Songwriters of the 70’s” will be held, no online but in person at the Brooklyn Guitar School Showcase on December 7th and speaking of the 70’s, we’ll be doing a full set of Aerosmith songs around 11pm. If you’re in town, stop by Hank’s Saloon between 8 and 11pm and check it out!