The 5 Words in Every Mumford and Sons Song

The 5 Words in Every Mumford and Sons Song

by Dan Emery
0 Comment
Get Started Now. View Upcoming Classes
Songwriters get attached to certain words. Sometimes it’s because they roll off the tongue in a certain way or have great rhyming options or because they have an emotional content that fits with our themes. Sometimes all three. Paul Simon for example liked to use the word Crazy. Some of my personal favorites are Ghost, Bones and Home. International folk-rock phenomenon is no exception! They write some of the most accessible songs out there and the lyrics are a big part of it. So what are the buzz words for writing such huge hits? Let’s take a look in the context of the 24 songs off of their two great albums!

1. Wait
As in “I will wait, I will wait for you”. This word pops up 22 times in a number of songs. Waiting is a romantic thing to do and they hope you’ll be doing just that in anticipation of their next album.

3. Love
A staple for all songwriters dating back as far back as songwriting goes. The Beatles used this one 613 times according to the internet (so it must be true). Mumford and Sons manage to work it in 35 times in two albums.

5. Heart
Finally, the most common word in any Mumford and Sons song, guess how many songs out of 24 use it! Did you say 19?! Because you would be correct. 19 times!! 10 on the first album and 9 on the second! It’s a lot. In total the word heart appears 66 times!

So pick your favorite words and go write a hit song! In the mean time enjoy these visual representations of how often other words are used in M & S songs. Runners up include Know, Head and Hands which are all great ones! Make a word cloud of your favorite album!

This first one is from Tagul.com?(click to enlarge) 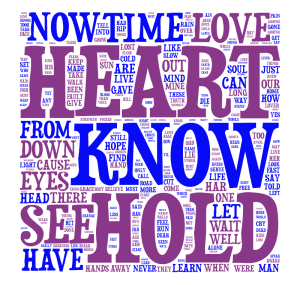 And here is one from Tagcrowd.com which shows the exact frequency of words used (click to enlarge). 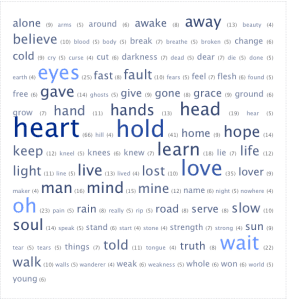