Get Started Now. View Upcoming Classes
Leigh Celentano started out in the Absolute Beginner guitar class and is now living her dream of playing in a band! Read on to hear about her journey as a guitar player… 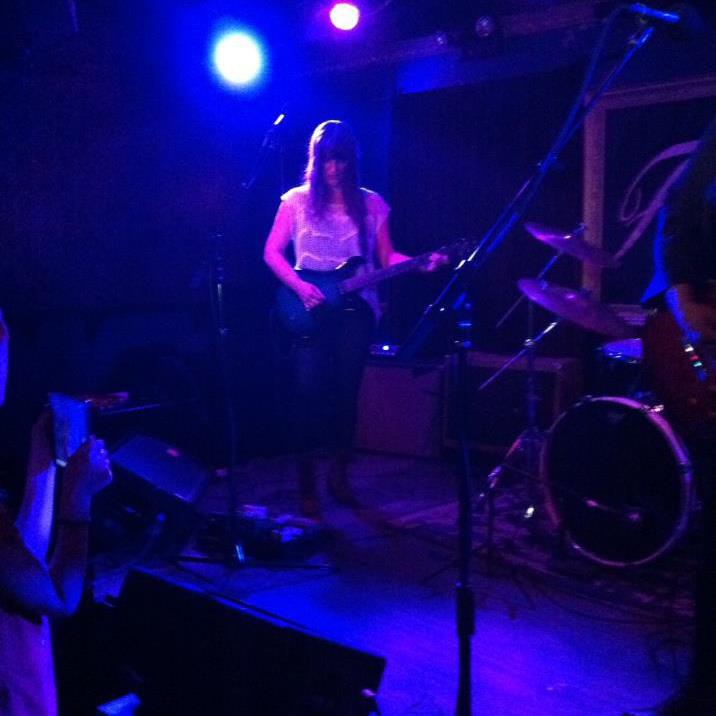 When did you first start playing guitar, and what made you decide to pick it up?
I started playing guitar about 5 years ago (shout out to the Absolute Beginner class at NYCGS!). I wanted to play the drums when I was 6, but my parents weren?t exactly into that idea. Instead of playing the recorder (yes, this was the replacement offered to me for the drums … ), I got into other non-musical activities, although I always listened to a lot of music and went to a lot of shows from a young age. While other priorities continued to compete with my actually learning an instrument as I entered adulthood, the thought was always in the back of my mind.

Eventually, the thought moved from the back of my mind to the forefront of my mind, although I had a lot of fear and anxiety thinking about trying to learn an instrument as an adult. I liked the sound of the guitar a lot, and the versatility with which one could play. Honestly, I am not sure exactly what pushed me over the edge to call the NYCGS and sign up, but I did.

Interestingly enough, a few months after I started learning the guitar, I sustained a hand injury that put my left fretting hand out of commission for months. I was so upset that something was now thwarting my musical initiative that I actually tried to switch it up and fret with my right hand, while using a small thumb pick on my bandaged left hand. While this venture proved relatively unsuccessful, I think it was important to enforce my dedication to learning and also to remain involved in the initial guitar concepts, even if I couldn?t exactly execute them flawlessly at that moment.

You started with the Absolute Beginner class, and three years later you’re playing lead guitar in rock bands! How awesome! What has been the most helpful thing to keep you motivated?
I knew when I finally took the leap and started learning guitar that I wanted to play in a band, to perform. The hardest concept for me was the disparity of all the musical accomplishments I wanted to have, the sound I envisioned myself making, and the reality of where I was in the beginning. Guitar is difficult to learn, my hands felt clumsy, I wasn?t fast enough, I was scared to play with other people, but I got bored practicing and playing alone. I knew I wasn?t moving any closer to my goal of playing in a band by not putting myself out there but I never felt quite ready.

What really got me through those first messy years, and out of my comfort zone, were my teachers (yes, at NYC Guitar School!) I can?t thank Vince and Suke enough for their encouragement and inspiration, for encouraging me to put myself in challenging situations and to always strive to be better. It is so important in life to have people around you that are supportive, who encourage you to continue, to get through that rough spot of not really being that good, to push you to be better. There were times when I never thought I would be able to move my fingers fast enough, or that I?d never get decent enough to play with other people, and I just wanted to give up. In those moments, having teachers to really support you no matter where you are at in your journey makes all the difference.

In addition to my teachers, I now find motivation in my bandmates in Castle Black, whose current line-up has been in the works since last summer and has finally come together a few months ago. I can?t speak highly enough of these ladies; they are first and foremost amazing people, as well as highly talented musicians, supportive, encouraging, open, positive, experimental and motivational. This musical journey would not be the same without them.

How often do you practice, and do you have any advice for a beginner just starting to learn the basics?
My goal has been to practice every day, and that generally tends to happen, or at least translates into 5 times a week! As a band, we tend to practice 2 or 3 times a week, which doesn?t really feel like practice since it?s always so much fun. I did just purchase a travel electric guitar so that I can play if I am out of town.

I think the best advice I have for a beginner just starting to learn the basics is to hang in there. Know that it?s not going to be easy at first and you may not sound good for a while, but the more you just sit down and practice the basics, practice chords and rhythms and songs, the quicker you are going to get better. Carve out a specific time each day that you dedicate to practice. Play with other people as soon as you can. Don?t let anyone put limits on you or tell you that you can?t achieve a certain goal.

What are some goals that you’re working on right now in lessons/bands/etc?
One of our major band goals at the moment is to write our own songs. We started about a month ago, and hope to have a few songs completed by end of summer. We have also talked about switching up instruments for a song or two, so that is something we may look at further down the road.

My current personal goal is to continue to make time to further my technical and theoretical knowledge of the guitar, to incorporate the violin bow into my playing and to play more complicated parts while singing back-up vocals.

Do you have a crazy big guitar dream to eventually accomplish?
The dream that I have had for a while, to be a part of a solid band with future goals, is just beginning. I want to take our musical journey as far as it can go, so I?d say the dream is to just make awesome, honest music with them, and be open to what happens from there.

Who is your guitar hero?
There are so many amazing and inspirational players out there, but if I had to name one who has had a profound influence on my playing and my motivation, it would have to be Jack White.