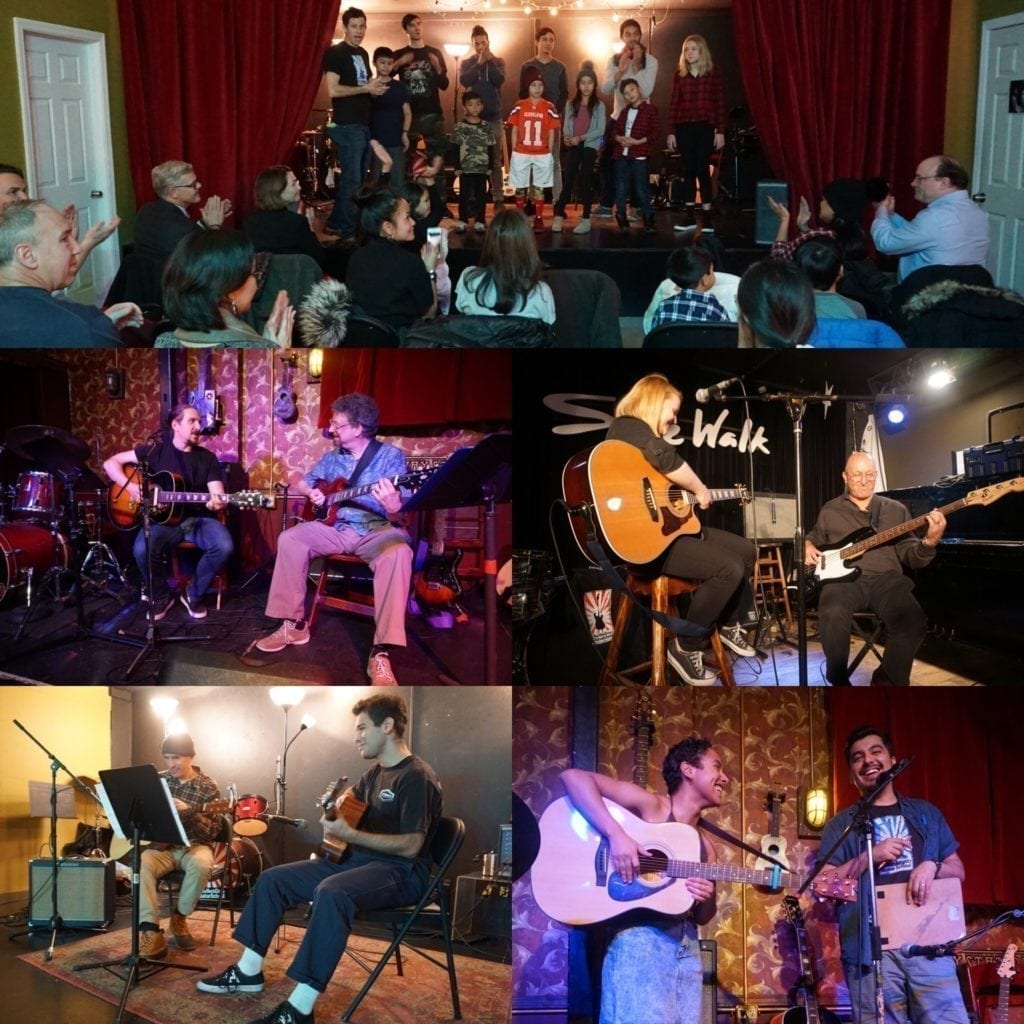 While we as teachers should never pressure a student to participate in a show, a little encouragement is sometimes all it takes to get them on stage. Letting a student know you believe in them enough to suggest they perform is a great thing, whether they agree to do the showcase or not. It gives them a confidence boost and can often open a conversation about their progress on the instrument.

1. Playing in public is the fastest and most effective way for your students to feel and identify as if they are musicians – they may feel that this is not their goal nor their desire, but they’ll never know if they don’t try it out at least once! This could be a part of them they’ve never explored, a passion that could be lying undiscovered, waiting to be pursued. Plus, these showcases are the most supportive environment for anyone to get started with performing.

2. The act of preparing for the show inherently accelerates their progress on the guitar. And they always have the show they were supposed to have; i.e., if they do great, it reinforces their love for guitar and their knowledge that hard work and practice equals success. If they don’t do as well as they hoped, you both (student and teacher) will learn where their strengths and weaknesses are, giving you information on what to focus on going forward in the lessons.

3. The social/community aspect of the showcase can be a really fun and powerful motivator! We’ve had students start bands by way of preparing and performing at showcases. Friendships develop, song ideas are tossed around, students get a feel for what other people at the school are working on, etc. The benefit of getting a big group of our students and staff together for these events is huge!

Tips For A Successful Show

1. You can lead into suggesting to play a show by starting with an acknowledgement of the progress you see in their playing. As teachers, we’ve all had that surge of pride and excitement when your student finally nails that lead they’ve been working on for weeks or that switch from the G to the C chord. You can ride on that enthusiasm with something like, “That’s the first song we’ve played fully from start to finish. Congrats! You worked so hard on it and it payed off! I’d love for you to play it at the next student show. They’re so much fun. It’s a very supportive environment and I’m really confident you could have this song performance ready by April!”

2. Make sure they know you are there to support them through the process. If they are at all apprehensive, let them know that you wouldn’t put them in a position where they might embarrass themselves. Your level of confidence in them can make all the difference in how they feel going into the show. Be supportive but at the same time, also be realistic. If a student does not seem ready yet, be straight with them and let them know they need to practice more if they want to be ready by the show. If someone seems overconfident but has little to no performing experience, make sure they know to be over-prepared, because the nerves and excitement from being in front of people could have more of a negative effect than they think.

3. It is not always possible for teachers to attend the shows, but it goes a long way when they can. If students know you will be there watching, they are more likely to keep their commitment to perform. The idea of seeing your teacher outside of the lesson time and getting to socialize a bit can also be a motivating factor as well. So whenever possible, try to attend the show so that it becomes something “we” are doing, rather than something “they” are doing. Having your full support is so important.

To take a lesson with Tony, sign up here!