Someone Has To Be The Parent

Home News Blog Someone Has To Be The Parent

Someone Has To Be The Parent

I’m passionate about guitar–and I’m super passionate about self-improvement, practice routines and being an effective parent to my three kids. To my surprise, when I started writing blogs about those topics, they received way more engagement (and student signups) than the previous posts about scales and barre chords. So, here’s another parenting blog from a guitar school founder and guitar playing dad!

There Was A Gap Between What I Thought My Kids Needed To Learn, And What They Were Being Taught.

Here’s What I Did.

Our kids may be learning music–but they are also preparing for the bigger “all the world’s a stage” stage of adult life. To get ready for life, they need to practice meeting life resistance. Ideally while enjoying themselves.

Some of this preparation can happen in the classroom. But much of it can’t–or won’t.

And that is where parents come in.

Over the years, my wife and I have tried to help our three kids gain confidence and skill by encouraging or expecting them to take mass transit alone, go for walks, learn to swim and drive, earn their own pocket money, spend unsupervised time at home or with other kids, etc.

The school can’t do that.

There are other things the school can’t or won’t do. For example, our kids went to an elementary and middle school where children were not allowed to run on the playground because of a fear of lawsuits–and “indoor recess” during inclement weather consisted of watching videos.

Have you heard the old adage “change what you can and accept what you can’t?” My spouse helped create a PTA led indoor recess with board games, legos, and even some jump roping instead of videos. That was good.

But the complicated school/legal/district system was not going to let our kids run at outdoor recess! That, in our view, was bad.

Since we believed that children need to run (and climb, chase, fall down, etc.) to be healthy we became responsible for making sure our children had the chance to experience the thrills and mild risks of being physically active without undue supervision.

At the end of the day, we were the ones responsible, not the school.

Later, our kids got the incredible opportunity to go to a high school with caring and skilled teachers (including my English teacher spouse), great facilities, and a competent and devoted administration. That was good.

But this school had a problem which more and more schools have. While the student body was as kind and thoughtful as the faculty, the school environment was a political echo chamber, featuring few challenges to the dominant ideological world view, and an unfortunate lack of nuance in some discussions. That is, in our view, bad. (Even though we agreed with many of the prevailing viewpoints.)

Since we believed that children are stronger when they are exposed to strong conflicting arguments, and that questioning convention and making up your own mind are virtues that make people more capable (as well as more fun to hang out with) we chose to be responsible for making sure that our kids get some extra education in these areas.

We knew this wasn’t going to happen by accident. It had to be a priority.

I shared my worries with my kids. I said, “I am concerned that you are getting a one-sided view of the world, and I want to make sure you’re able to hear and examine different perspectives.”

One basic step to help our kids get a wider perspective was to encourage them to read books about kids from different situations, like the famous I Am Malala (by a teenage girl who was nearly killed by the Taliban as she fought for the right to be educated) or Red Scarf Girl (about a teenage girl growing up during the Cultural Revolution in China).

Since our children were small, we’ve also often posted a “value of the month” (like courage, reliability or kindness) in our kitchen, along with fun or inspiring quotes. As our concerns about unhealthy messages in education grew, we added something to the other side of the quote board–the “3 Untruths” popularized by Jonathan Haidt and Greg Lukianoff: “What doesn’t kill you makes you weaker”; “always trust your feelings”; and “life is a battle between good people and evil people”. This handy reference of bad advice is useful during dinner table conversations about ideas coming home from the internet–or school.

Here’s a picture of our quote board. (Right now the other side, which we change out from time to time, is entitled “Freedom Of Expression” with quotes from Frederick Douglas, George Orwell, Maya Angelou, Judy Blume and Oscar Wilde.) 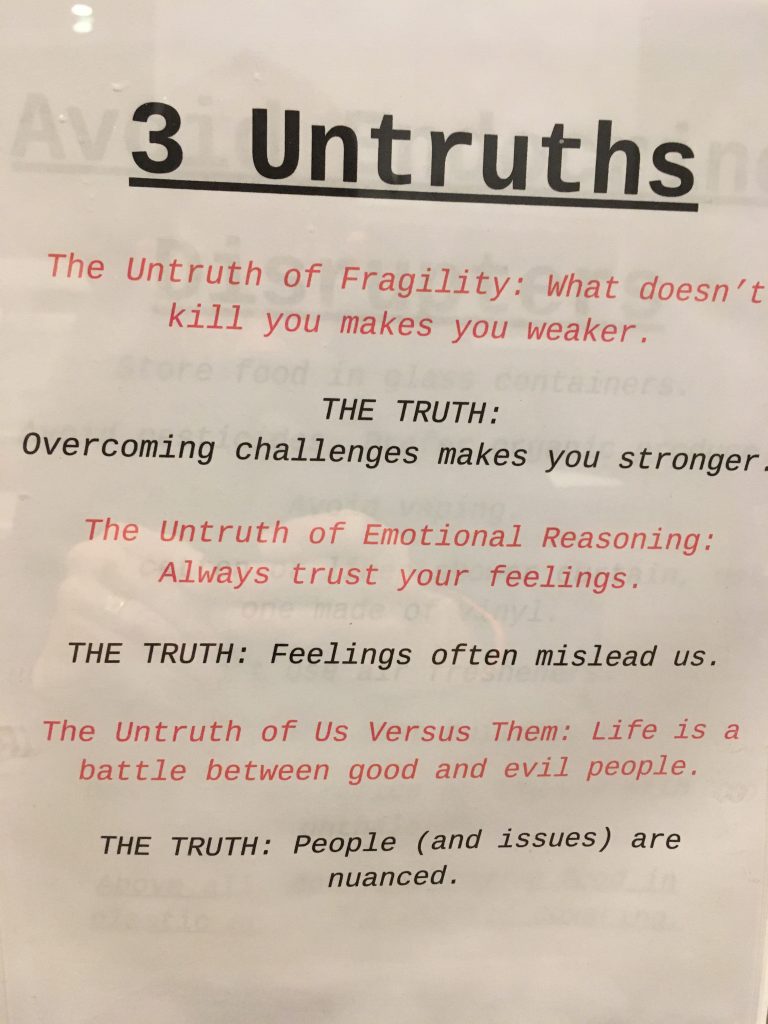 As our three kids got older (I now have 2 teens and a 20 year old), I’ve also shared many podcasts and videos with my kids from various points of view. I joined a non-partisan group dedicated to “depolarizing America” called Braver Angels and attended virtual events with people with very different politics from around the America–and with one of my daughters. And I encouraged that daughter to enroll in a pilot program for high school students from BridgeUSA which brings together students from “across the ideological spectrum for constructive dialogue.”

One activity we especially enjoy is watching documentaries together. Not only is this a fun way to spend time together, but because we alternate choosing the film, both of us get to be challenged and learn. (Her most recent choice was a movie about climate change called “Cowspiracy”. Mine was “Borrowed Future”, an expose of the awfulness of the student loan industry.)

And a couple things are clear.

One is that my kids have and will have different perspectives than I do. That’s understandable–they are independent people. That’s OK with me. In fact, they’ve already changed my own mind about certain issues.(I’ve even been known to ask my son for his voting recommendations, since he’s typically better informed than I am!) I’m not just raising kids–I’m gaining valuable sounding boards!

But another thing that is clear is that school isn’t going to be the only place where they will be exposed to polarization and groupthink. Any skills they learn now about thinking critically and independently are going to come in handy for the rest of their lives.

I remember getting into an argument with one of my small children once, and losing my temper. And afterwards my wife said “one of you is going to have to be the adult–and it isn’t going to be the 10 year old.”

We’ve been lucky to send our kids to good schools with committed teachers and administrators who are sincerely working to make the world a better place. But no matter what a school is like, it would be very surprising if there wasn’t some dissonance between the values of some of the practices or people at the school and those of the parents. That’s going to be true whether you’re a “blue” or a “red” (as we say in Braver Angels), and whether your concerns are educational, political, or other.

There’s a gap. And in the middle of that gap is your child.

Now…who will be the parent?

P.S. Here are a couple of resources I’ve found to be helpful as I strive to raise independent kids:

LetGrow https://letgrow.org/  Resources for raising independent kids from very young to teen (motto: “When Adults Step Back, Kids Step Up”)

Heterodox Academy: https://heterodoxacademy.org/ A resource for teachers, administrators and educators (and a great mailing list for parents to get on)