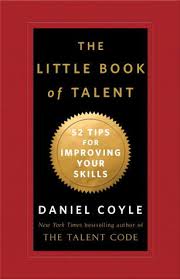 Daniel Coyle has spent time in the world’s most talented places. A Moscow tennis club which had, over three years, produced more top 20 women players than the entire united states, a ski academy in Vermont which had produced over 50 olympic skiers in the past 40 years, a Dallas vocal studio which has produced millions of dollars in pop-music talent. What do these places have in common? More than you might think! The biggest take away is that talent is the result of hard work, study and general determination – not something that you’re simply born with or without. If you’re like me, that’s extremely comforting! We can change our destiny!

Here are some random tips from the book, which is organized into short, digestible chapters.

Coyle points out that observation makes up a huge percent of time spent at these talent hotbeds. For a beginning guitarist that can mean going out to shows but it doesn’t have to. Thanks to the internet we can study the work of great musicians who have been dead for ages! In 2009 I started studying classical guitar in the hopes of getting into a conservatory which offered a music composition degree. I learned two simple pieces by Tarrega (a go-to for beginning classical players). The program didn’t require me to learn classical guitar and those were the only two pieces I ever learned but somehow I was able to write an actual classical piece in the style of Tarrega just riffing off the techniques I learned in those pieces (Adelita and Lagrima). It works!

Think of what will go right, not what could go wrong!

“A violinist faced with a difficult passage should tell himself, “Nail that A-flat,” not “Oh boy, I hope I don’t miss that A-flat.” It’s like when you’re dreaming and you decide you want to fly. If you look down at the icy waters below and think about not falling, you fall right away but if you can look up at the horizon and see yourself soaring majestically over the mountains, that’s what happens! Sometimes you fall either way but you get the idea!

Let’s say you’re practicing changing between a G chord and the dreaded C chord. As you progress the tendency is to go faster and faster. As Coyle says, “When we learn how to do something new, our immediate urge is to do it again, faster. This is know as the Hey, look at me reflex.” This tendency, Coyle says, can be a breeding ground for sloppiness! Take your time and go much slower than you feel you need to. You’re building neural connections that will last forever! Now is the time to get it right.

Consistency! #18 echoes throughout the halls of NYC Guitar School daily because it’s tremendously important. Our most successful students are the ones who practice everyday because it becomes part of who they are. It doesn’t matter that five minutes a day only amounts to 35 minutes a week. The fact that you’re doing something so consistently makes your brain grow incrementally in a way that you find yourself getting better in your sleep. Who doesn’t have minutes to live their dreams?

Struggle, Coyle points out, is uncomfortable and for that reason we naturally try to avoid it when we can. But struggle is the dawn of success. “At all of the talent hotbeds, from Moscow to Dallas to Brazil to New York, I saw the same facial expression… the face of someone intently reaching for something, falling short, and reaching again.”

The Little Talent Book is available for purchase on amazon and itunes and it’s so worth reading that NYC Guitar School founder Dan Emery just ordered a whole box of them to give out to our students and staff! They’re all gone now but there are plenty left on the internet! Go get it!