Although power chords are a staple of many guitarists’ toolkits, many players remain unaware that power chords can be far more versatile than they are generally given credit for. By altering just one note on a common power chord shape, you can create an entirely new chord that still retains many of the sonic qualities that have made power chords so beloved. Additionally, it’s easy to quickly back and forth between an altered power chord shape and your original power chord shape, allowing you to throw in these altered shapes in riffs of otherwise straight ahead power chords.

This practice of adding notes to a power chord shape is often referred to as power chord extension. While power chord extensions remain underutilized by many players, they’re an important part of the guitar parts of many artists, with Van Halen, Chuck Berry, Diet Cig, and Weezer all being notable examples. In this piece, we’re going to go over some simple but great power chord extensions. These shapes will work great when both writing your own riffs and when looking to add your own flair to covers.

Before learning any power chord extensions, it’s important to first make sure that you have a solid understanding of the basic power chord shapes that we will be using as our foundation. Power chords are movable chord shapes consisting of three notes (only two of which are unique pitches), and whose root note is doubled in both the top and the bottom of the chord. While you can certainly invert a power chord so that it’s root note is no longer the bass note or the top note, doing so would make it no longer what we really think of as a power chord. So with that set of parameters established, here are the four chord shapes that qualify as power chords: 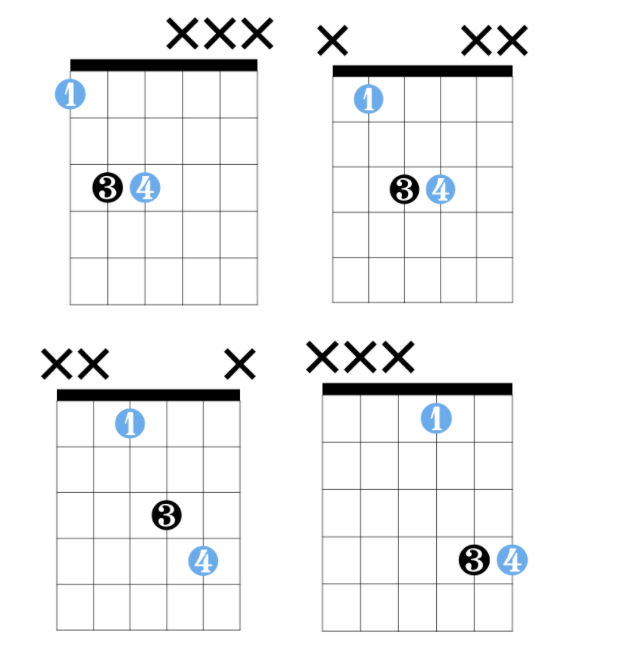 Take a moment to go over any of the above shapes that may be new to you or that you may otherwise need a refresher on. Once you feel solid with all four shapes, feel free to move on!

The first power chord extension we’re going to learn is going to involve adding a major ninth to our power chord shape. This extension works best on the power chord shapes that start either the 6th string or the 5th string, but it’s playable on the other two shapes if you’re able to stretch enough. Once you’ve picked what shape you want to use, reach out with pink to raise the very top note of the chord by two frets.

And that’s it! Here’s a chord chart of the shape, with the chord starting on the 6th string for purposes of this example: 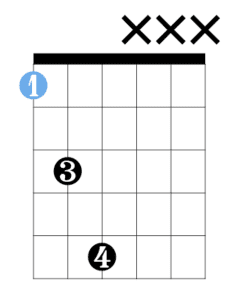 For those interested in music theory, the degrees we are currently playing in this chord are the 1, the 5, and the 9, which make the technical name for this extended power chord a sus2.

Here’s a chord chart of the major seven power chord, with this example using the shape that starts on the 4th string: 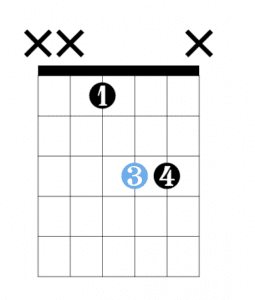 In this chord, the degrees we are playing are a 1, a 5, and a major 7, meaning that this chord is essentially a major seven chord without a third, although you could also call it a major add 11chord if you want to be a stickler about names.

Here’s a chart for the minor 7 power chord, starting on the 5th string: 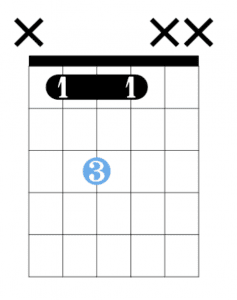 The degrees in the minor 7 power chord are 1, 5, flat-seven. This makes it essentially a minor seven chord without it third, although proper nomenclature would label it an inversion of a minor-11 chord.

Likely the most common power extension of all, the major 6 power chord is sometimes referred to as “The Berry Chord” due to its prominent usage by rock n’ roll pioneer Chuck Berry. When it is referred to as The Berry Chord, it is typically implied that the guitarist is quickly switching back and forth between a typical power cord and the major 6 power chord, as Chuck Berry was prone to do.

To play a major 6 power chord, raise the middle note of your power chord by two frets. This is the first power chord extension we’ve gone over where the note being raised is not the note on the top, and raising a note in the middle can be surprisingly tricky, although certainly not impossible. Because of this, many guitarists will simply remove the upper note from the power chord shape when adding a major 6 extension, leaving only the first two notes of the chord. While it’s not quite a power chord in the truest sense when one does this, it does still capture the feel of a power chord and can sometimes be a more efficient substitute.

Here’s a chart of the chord, with this example using the shape starting on the 5th string: 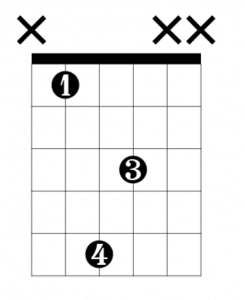 Here’s a chart for the flat 5 power chord, starting on the 6th string: 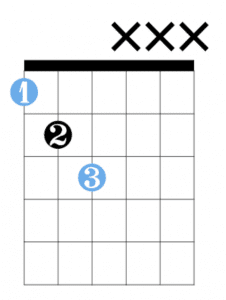 The intervals in the flat 5 power chord are 1, flat 5, then 1 again, meaning that’s essentially a diminished triad with the fifth replaced with a second root an octave up.

While there are obviously many more power chord extensions that we covered here, these are all a great place to start! If you come up with any cool riffs using the material discussed in this piece, please feel free to send me a video or audio recording at benfittsguitar@gmail.com. I want to hear your riffs, and there’s a chance that we just might share them!