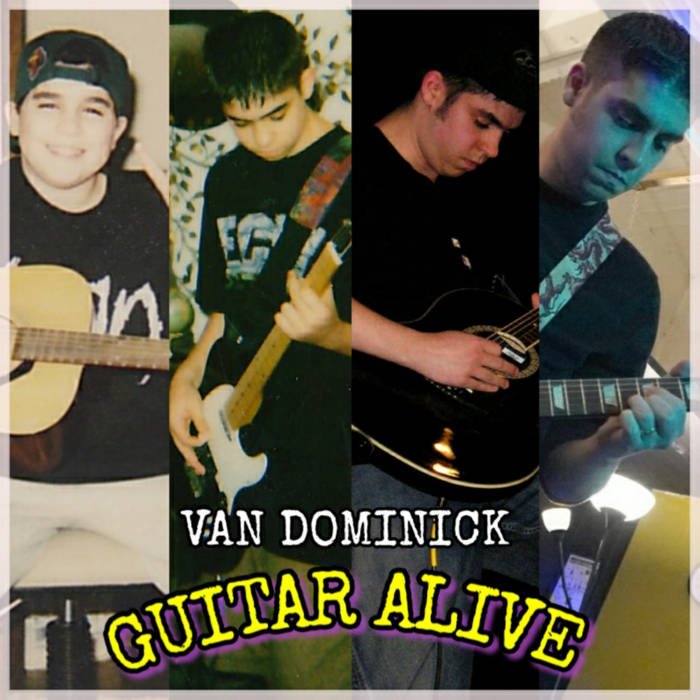 Hard rock/metal guitarist and New York City Guitar School student Van Dominick has been working hard at his craft as of late, releasing three EPs and a pair of singles over the last year and a half. The most recent of these EPs, Guitar Alive, was released on May 8th of this year and stands out as Dominick’s strongest collection of songs to date. An entirely instrumental five-track EP consisting of three unique compositions followed by a pair of alternate takes, Guitar Alive is full of fun-loving, headbanging riffs reminiscent of such classic metal juggernauts as Metallica, Iron Maiden, and Dio, who is the namesake of the EP’s third track.

The EP opens with the aptly named “Rise (A Heavy Metal Anthem)”, a mid-tempo stomper dominated by a distinct lead guitar melody that channels Ride The Lightning-era Metallica. The opener is followed by the considerably more somber track “I Am”, a sparse blues-inflected number with nods towards balladry. “I Am” is a percussion-free piece that displays Dominick’s clean guitar tones, eventually contrasting them to a highly distorted solo in its outro. “I Am” is in turn followed by “Dio Vibes”, a riff-driven headbanger than more than lives up to its name. Although anything imitating Ronnie James Dio’s thunderous voice is obviously absent from this instrumental track, any of the crisply distorted guitar riffs to be found on “Dio Vibes” would be right at home on such classic Dio albums as Holy Diver or Dream Evil.

This is the first entry in the NYCGS Community Music Spotlight. The NYCGS Community Music Spotlight exists to give attention to music recordings released by members of our NYCGS community. This includes teachers, staff, and especially students, as well as anyone else who is part of our community. If your part of the NYCGS community and have released music that you would like to see featured in a post like this, please free to reach out to me at benfittsguitar@gmail.com