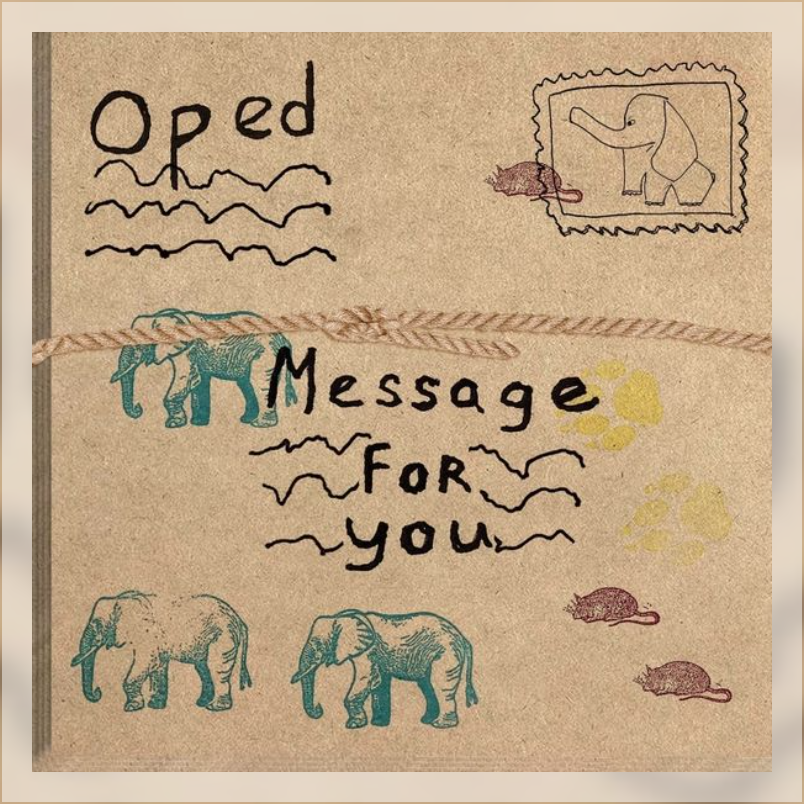 The opening section of the opening track on Message for You, the new album from NYCGS student Ed Ciocys, sets up the album’s following thirty minutes perfectly. The track is titled “The Sun Will Rise Tomorrow”, and its instrumental opening is led by an authoritative acoustic lead guitar playing a bittersweet melody that instantly invokes the dusty, pensive aesthetics of modern americana and indie folk. Ciocys’ voice joins the ensemble soon after, and his sincere, understated vocals complement the sparse accompaniment admirably. Ciocys’ down to Earth and conversational vocals are both one of the few constants of Message for You, as well as the heart of the album’s charm.

Message for You is the fourth album released by Ed Ciocys under the name Op Ed, which is Ciocys’ favorite musical alias, although not his only one. Message for You, like the previous three Op Ed albums, was recorded by NYCGS’s own Tony Calabro at Astoria Park Recording, the studio located in the Queen Guitar School building. Message for You shares the breezy, modern folk rock style of its predecessors, which finds the middle-ground between more old school songwriters such as Townes Van Zandt and contemporary voices like Jason Isbell. But while the sound explored on Message for You is nothing new to Ciocys, this album is where his sound really comes together. His songwriting has matured, his vocals have become more controlled, and his guitar chops have grown.

Message for You encapsulates a narrower musical range than what has been displayed throughout previous Op Ed albums, but this stylistic focus gives the album a sharper, more congruent personality. However, that’s not to say that Message for You doesn’t explore. While the album leans towards western-tinged, melancholic folk rock, Ciocys touches on alternative rock on tracks like “Mannequin Man” and “All Roads Lead To Providence”, flirts with the blues on the track “Lies, Lies, Lies”, and grabs Magnetic Fields-style lo-fi indie by the throat on “Circle Is A Square”. All in all, Message for You is an endearing offering from a songwriter with an earnest sincerity that is hard to deny.

The album Message for You by Op Ed can be streamed HERE. Op Ed will also be celebrating the release of Message For You at the next NYCGS Community Showcase with a virtual performance of songs from the album. Also performing will be NYCGS community members Luciana Salas, Tali Sigal, and Lis.

You can also grab a sneak peek at on one of the music videos off this record, “You Know I Love You”, on Ed’s YouTube channel. Also, be sure to check out some of Ed’s other musical aliases, including Adventures In 3D and ’66 Zero!