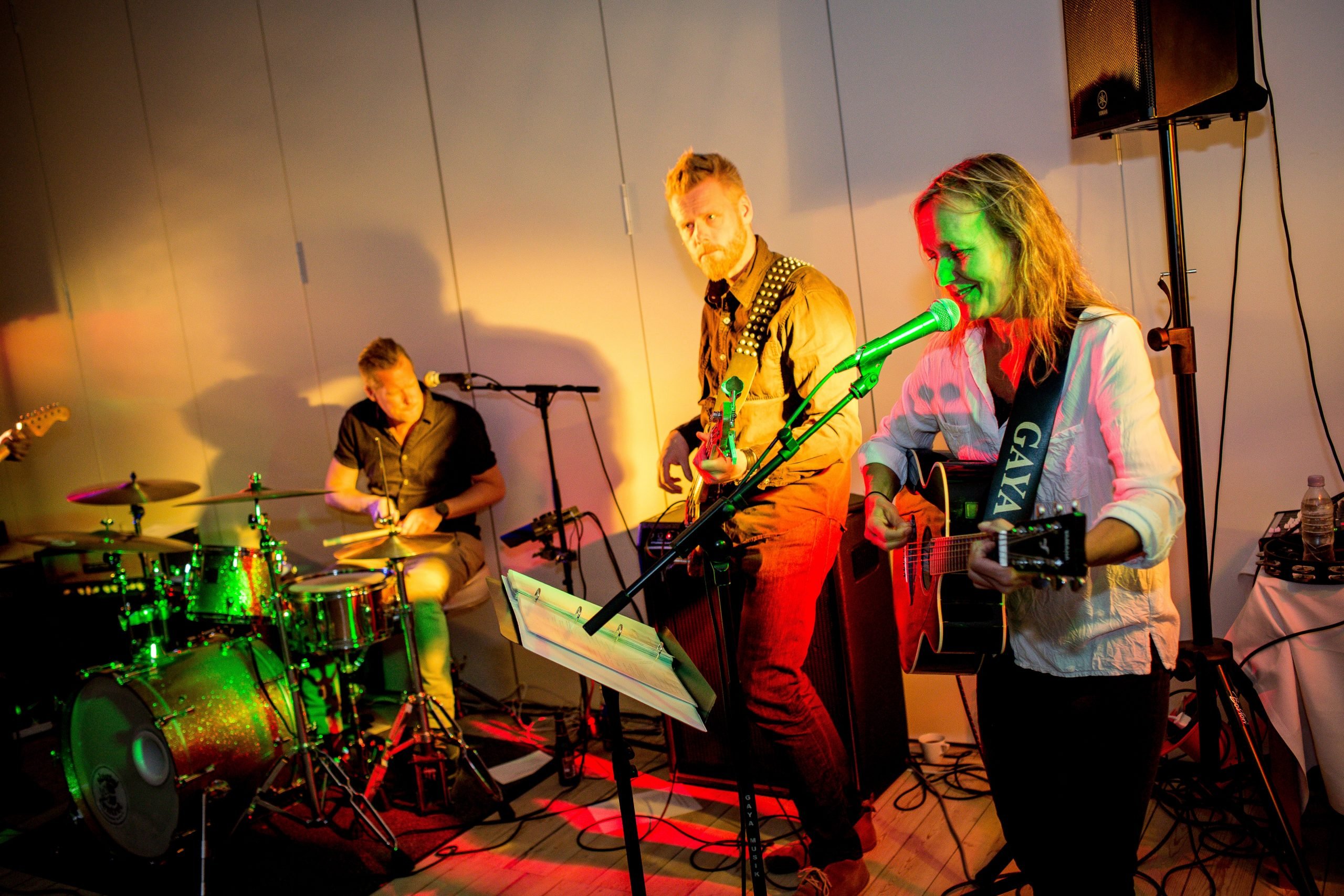 We spend a lot of time and attention on learning how to play improvised solos. When we think of improvisation in music, the first image that likely comes into our heads is of a soloist tearing through scales and arpeggios. It makes sense that the focus is on improvising solos; not only are improvised solos integrated into otherwise pre-composed to a degree that other would-be improvised elements are not, but they’re an awful lot of fun to play. However, soloing is only a small part of what one can do with improvisation.

Chances are that you improvise things other than solos often. Whenever you come up with a riff or some chords off the top of your head, that’s an example of improvisation. Whenever you’re jamming with a friend and you’re playing something other than a pre-written song, that’s an example of improvisation. However, many guitarists approach these things more by feel than by any sort of practical methodology, as they do with soloing. This article will give you some strategies to help change that. 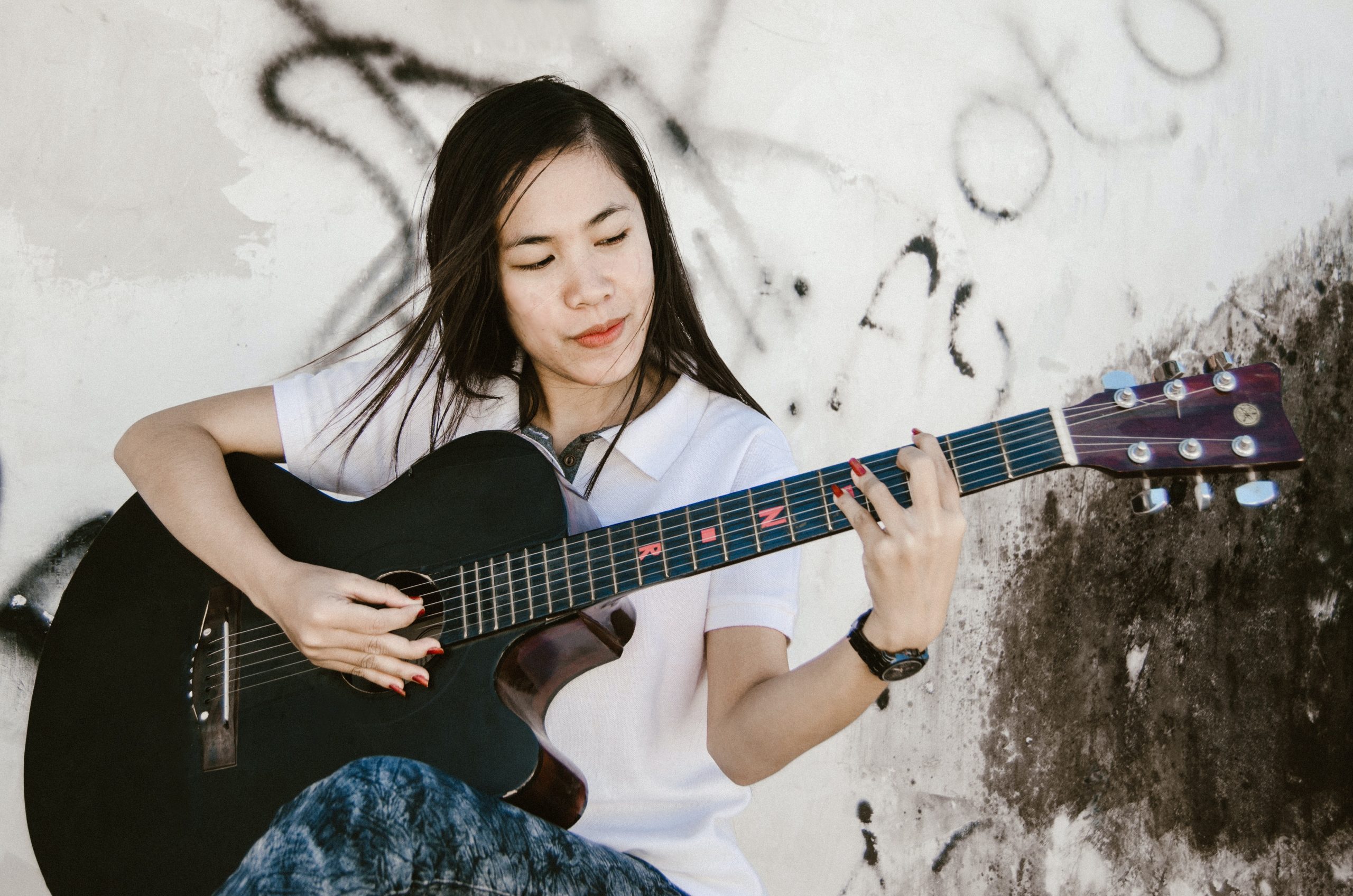 Chord progressions are something you’ll likely find yourself doing quite often. Whenever you’re jamming with a friend and it’s their turn to solo, chances are you going to be coming up with some chord changes for them to play over. If you’re interested in learning about which chords go well together, you can read all about that here. That article deals with chords from a songwriting angle, but at the end of the day, improvising is just songwriting happening in real time. However, if you feel like you may have trouble summoning the relevant theory knowledge quickly enough to apply it to an improvised setting, the following set of tricks may help you out.

Starting by finding the root note of whatever key you want to play in along the 5th string. Play a major barre chord that uses that note as its root note. This chord is your I chord, which can function as your progression’s home base if you want it to. There will be two other major barre chords in the key that will be super easily accessible from the I chord.

Altogether, this gives you six chords at your disposal: the I chord, the ii chord, the IV chord, and the V chord (which can either be played as a major or as a dominant-seventh), and the vi chord. These chords are all in the same key and will blend smoothly together. They are not all of the chords in a given key, but are the most commonly used chords in popular music and will give you a lot to work with as you get the hang of improvising chord progressions. Additionally, all these chords can potentially be substituted with power chords that share the same root note, a trick that can be great if you’re playing in a punk or hard rock setting.

If this concept still feels a little murky to you, feel free to work through the example below.

For this example, I’m going to be playing in the key of E-major. On the 5th string, an E-note can be found on the 7th fret. Therefore I can use the 7th fret on the 5th string as the root for a major barre chord. This chord will be an E, and will function as my I chord. To find the IV, chord, I will move my root note up one string but keep it up on the same fret, bringing me to the 7th fret on the fourth string. This note is a D, meaning that my IV chord is a D chord.

I’m going to do the same thing in reverse find the V chord, staying on the same fret as the root note of my I chord, but going down one string instead of up one string. This brings me to the 7th fret of the 6th string, which is a B. This means I can play my V chord as either a B or as a B7.To find my ii chord, I’m going to up to frets from my I chord and play a minor barre chord where I land, which results in me playing an F#m chord. To find my vi chord I’m going to go down one string and up two frets from my starting E-note and play a minor barre chord where I land. This gives me a C#m chord, This means altogether, I have the chords E, A, B, B7, F#m, and C#m to choose from as I improvise.

Here are some charts for all of those barre chords, in case any of them are unfamiliar to you. 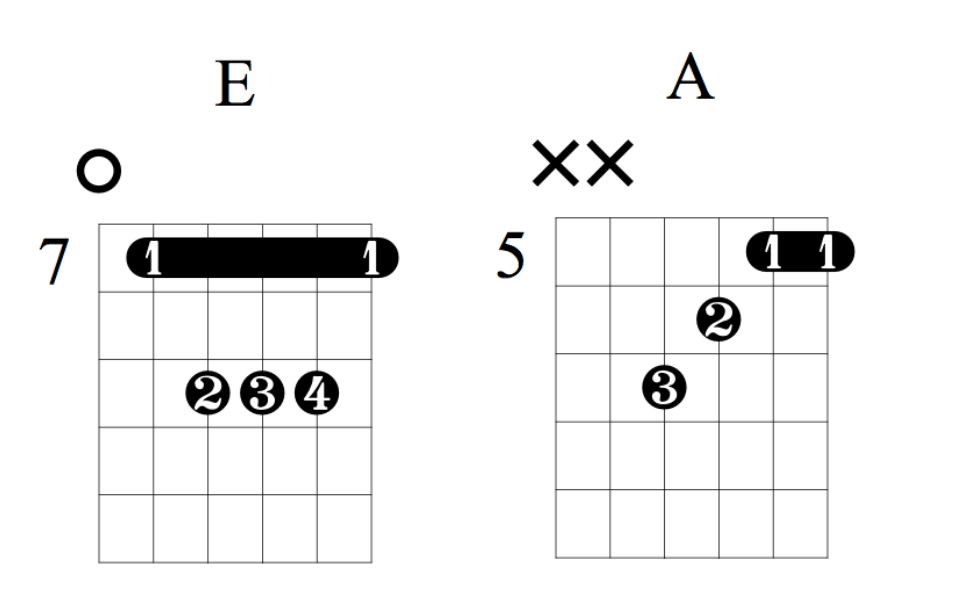 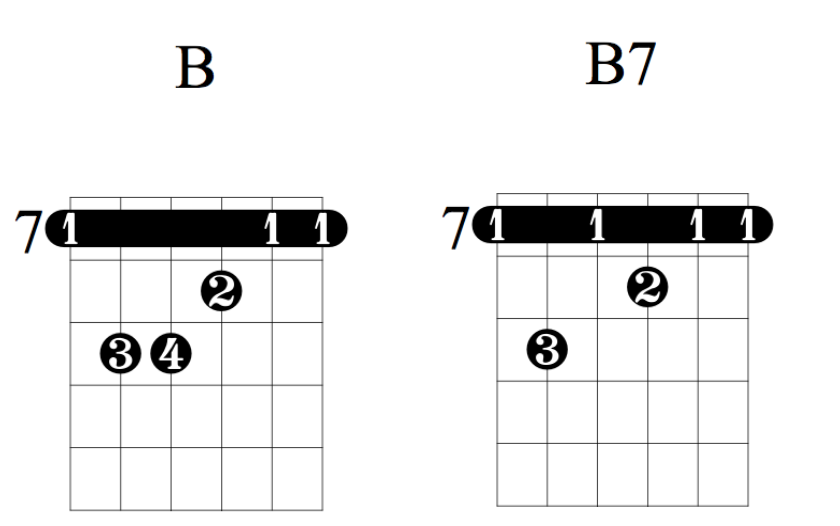 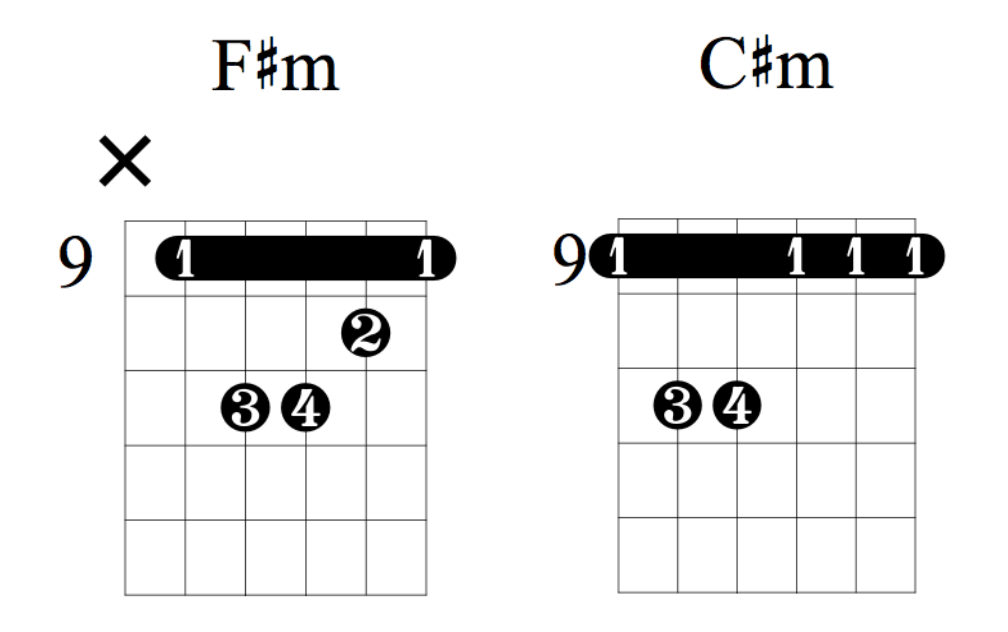 Below is a chord progression I improvised sticking to just those chords. 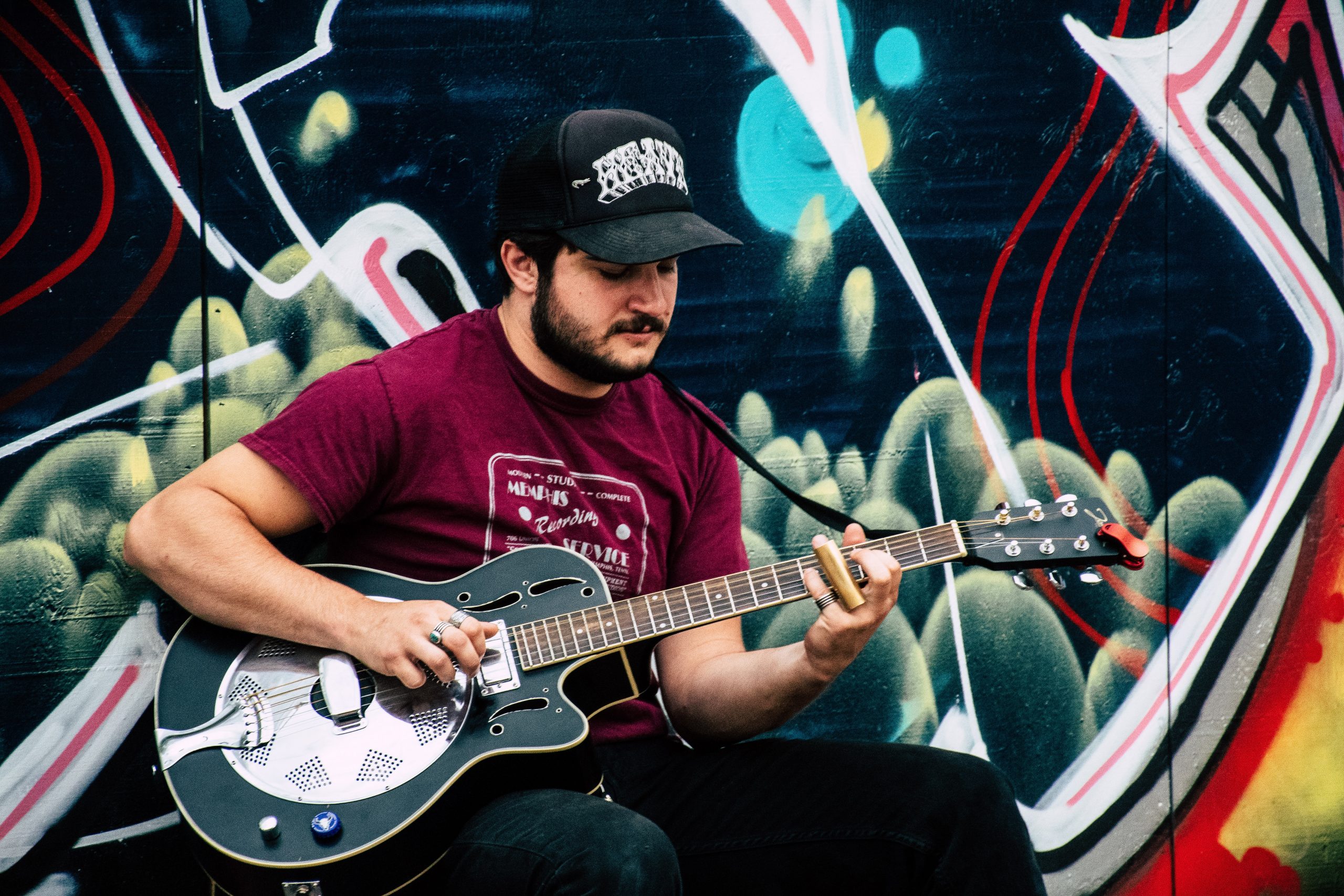 Learning to improve riffs can work great in jam situations with multiple guitar players and other chordal instruments, as well as when jamming in certain styles of music. Although the previously mentioned trick of replacing the major and minor chords discussed above with power chords can work great when jamming on heavier music, guitar parts in those kinds of music tend to be based more upon riffs than chord progressions. Additionally, guitar riffs are widely used in such other styles as funk, blues, country, surf, and more, which all adds to mean only being able to improvise chord progressions will only get you so far.

I’ve found the main obstacle to improvising riffs for most guitarists is the sheer, daunting amount of options available at any given moment. The average guitar has roughly twenty frets, which, when paired with all six strings, creates over one-hundred options of where to go next at any given moment. Therefore I recommend to guitarists new to improvising riffs that they start with a severely limited number of note options, which they can later add to as they get more comfortable with the concept. Below is a framework to help guitarists do exactly that.

Here is an example of a riff I improvised using just that above scale shape:

That same pattern can be applied to any key just by moving it up and down the fretboard as appropriate. If you have experience with soloing, you’ve probably recognized that the above shape is just the bottom end of the minor pentatonic scale. I’d recommend sticking to only this bottom end of the scale for now, as guitar riffs tend to be more bass-heavy than guitar solos anyway, and because the limited note choices tend to guitarists new to this as previously mentioned. However, once feel comfortable improvising riffs with the above shape, try peppering in some of the new notes from the below shape into your improvised riffs. The notes from the above shape will be safer choices that will likely be the bedrocks of your riffs, but the new notes added can give your riffs some great color.