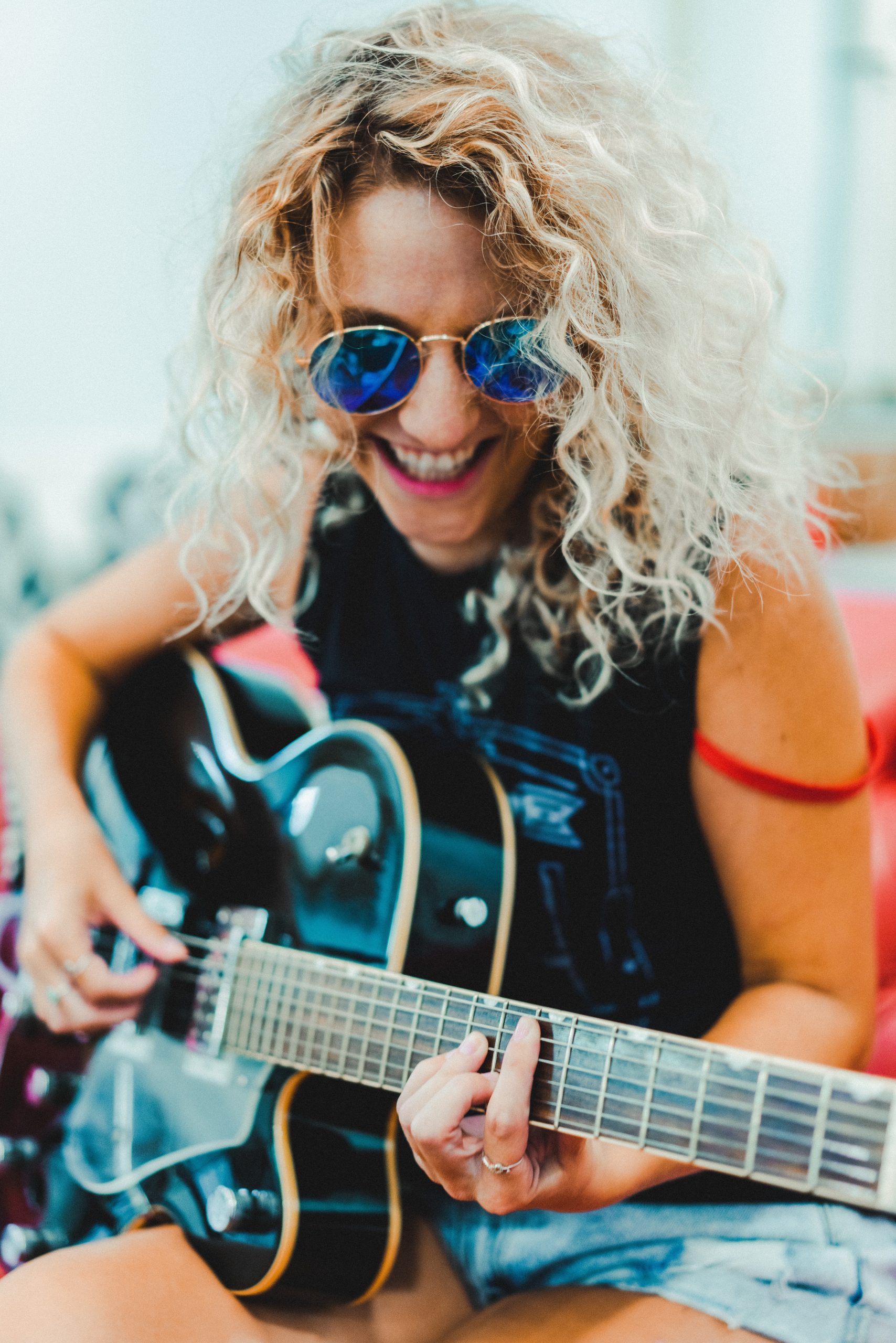 Rockabilly may be one of the earliest forms of rock n’ roll, but it’s also one of its most deceptively complex. Rockabilly blends elements of county, R&B, bluegrass, and into music that has a simple skeleton but is fleshed with some pretty crafty musicianship. In this article, I’m going to give you a guide to start writing authentic sounding rockabilly riffs today. Although the scope of the genre obviously encompasses more than just what’s discussed here, the main exercise in this piece is a great way to start writing rockabilly guitar parts, and the concepts discussed are applicable to rockabilly guitar playing outside of the confines of this writing exercise.

Rockabilly songs tend to only have a few chords, and are most commonly built around a twelve-bar blues pattern. While this may sound simple, a good rockabilly guitarist is able to flesh out that basic structure into something a tab more intricate and distinctive. They do this by combining notes taken from scale shapes with the chords the blues pattern, thus creating both slightly denser chords and little lead guitar licks placed between the chords themselves.

While most rockabilly guitarists will utilize barre chords at some point, many players in the genre rely heavily on open chord shapes. There’s something about the spank of an open string that really gives a rockabilly guitar part twangy punch the genre is associated with. Because of this, start by picking a blues in a key where all three chords can be played in an open position, such as E, A, G, or D.

Figure out what the three chords would be in that blues, but change the I and IV chord from dominant-sevenths to major chords. We’re still going to treat them as dominant-seventh chords, but for the time being, we just aren’t going to play the sevenths. Once you’ve figured out all of the chords, play through a full twelve-bars of whatever pattern you’ve ended up with.

Example: I’m choosing to play this exercise in the key of E. The chords in an E-blues are E7, A7, and B7. As we’re changing the I and IV chords to major chords, I’m left with the chords, E, A, and B7.

You can see open position scales tabbed out below in the four keys I listed as good examples earlier. The first note in each scale shape might not necessarily be the scale’s root note. We are looking at the following scales for their utilitarian function within the context of a very specific function, so I want to make sure that you had all notes in the scale position available to you, even if it means we’re starting to scale on a note other than the root. But even if these scales do start on a note other than the root, the context in which we are going to use them is still overwhelmingly Mixolydian, which is why I chose to label them as such.

Play through the scale appropriate to the key you have chosen. If the key you’ve chosen isn’t represented above, then try your best to figure out the shape using the concepts discussed. Once you feel like you’ve got the open Mixolydian scale shape down, then all of the pieces are finished. We just need to put them together.

To start writing rockabilly riffs, we’re going to take the notes from the open Mixolydian scale and add them to our blues-based chord progression. You can do this in a variety of ways, including adding them onto the chord voicings themselves to create denser chords, hammering on/pulling off into notes from the scale to shake up the chord, and, perhaps most importantly of all, moving away from the chord shape to play a riff of the scale before returning to the chord shape.

Another common strategy among rockabilly guitarists is to hold down the full chord shape, but only pick on or two notes from it at a time. The guitarist will then use notes from the open Mixolydian scale to throw in notes from outside the chord shape. Below is an example of a short riff based on an open E chord written by following this exact concept.

Try out jamming some ideas using these concepts over the I chord of your chosen key. Things are going to get a little more complicated when we move to the IV, so now just stick to the I. You can have the same pattern repeat for all four measures of the I chord, you can have a different pattern on each measure, and everything in between. You have complete freedom within the confines of the exercise.

Example: Written below is an example riff that was using this exercise, in the key of E-blues. So far, the riff is just written over the I chord in the first four measures of the blues.

The above riff starts the first two beats of each measure by playing a full open E chord, but with the pinky added to the second fret of the second string. The added note is a C#, which makes the chord an E6. Sixth-chords are a very common chord quality in rockabilly, and a good way to invoke that twangy, rockabilly guitar sound. On the first three measures, beats three and four are occupied by a simple, bluesy response lick played on the first and second strings. The final measure is built entirely around adding and removing extensions to that basic open E-chord shape, cycling through the chords E6, E, and Eadd9.

Once you have a riff figured out over the I chord, then it’s time to move onto the IV chord. This is where things start to get a little bit more complicated, as what you did over the I chord may not work so well over the IV chord. This is because a twelve-bar blues is not what we would consider diatonic. Diatonic means all of the notes fit neatly into the traditional concept of a key, without any use of accidental notes.

For example, since my own riff above is in the key of E, my IV chord would be an A. Therefore I’d simply switch to an A Mixolydian scale during the IV chord. This strategy offers a clean shift without any real chance of sour notes, but requires you to change to a new scale shape. However, the new scale shape may not be as much of a change as you think; all you need to do is find the seventh-degree notes of the new chord in your original Mixolydian scale, and lower them by one fret.

In my previous example, I was going from an E-chord to an A-chord. The seventh scale of an A is a G (it’s not a G# sharp in this case, because we are working with dominant chords). So I need to find the G#s in my open Mixoyldian scale shape, and change them to G-naturals. There are a total of three in the shape, which can be found on the 4th fret of the 6th string, the 1st fret of the 3rd string, and the 4th fret of the 1st string. If I lower all of those by one fret, I’m now playing the same notes as found in an A-Mixolydian scale.

Figure out the correct Mixolydian scale to use over your IV chord, then write a two-measure riff built off of that and/or the IV chord. This riff is going to fill the space occupied by the first IV chord in the twelve-bar blues pattern.

For the IV chord, the main rhythmic pattern that started each measure of the I chord is retained, but moved to an open A chord. Then, the F# on the 2nd fret of the 1st string is added from the A Mixolydian scale, changing the chord from an A to an A6. Beats 3 and 4 of both measures are occupied by short, bluesy response licks played from the A Mixolydian scale. The activity over the IV chord mirrors the activity over the I chord, but does so important variation and with a new tonal center.

After you’ve written the IV chord riff, it’s time to return to the I chord for the next two measures. Although it’s perfectly acceptable to write a new riff when you return to the one chord, it’s common to just repeat the main phrase from the time, with the possibility of a slight variation. Just remember that this time around, the I one chord is only going to be for two measures instead of four. So if you do choose to repeat the phrase from your original I chord, you’re going to have to chop it half in order to make it fit.

Example: Written below is a continuation of the previous example riff, this time showing the riff written over the seventh and eighth measures of the blues form.

The return to the I chord is an exact duplicate of the very first two measures of the entire form, with one important exception: the last note is changed from an E to an F#, in order to better lead to the upcoming V chord.

Written out below is the entire example riff this far.

Example: As my I chord is an E, in order to play over the V7 chord I just need to take an E Mixoyldian scale and raise the sevenths from Ds to D#s, thus giving me an E-major scale that will work great over the B7 chord that is my V7. I can think of this scale either as an E major or as a B Mixoyldian. It doesn’t really matter, so I may as well go with whichever frame of reference feels more natural to me.

This also brings us to the start of the turnaround, which is an important detail as well. A turnaround is a part at the end of the section that leads the listener back to the beginning of the form (or sometimes to a whole new section). In a twelve-bar blues, the last four measures are considered the turnaround.

The turnaround is typically handled a little differently, as it has a very specific function within the context of the form. It’s less about having a catchy or hooky line, and more about fostering a satisfactory resolution. Because of this, it’s common to write a line over the turnaround that ultimately focused on serving the chord changes than anything else. Luckily, the chord changes are considerably busier on the last four measures of the form, so it gives you a bit more to work with.

Try to write out a riff over all four measures of the turnaround. If you need a refresher, the chords you’ll be playing over are V7, IV, I, and V7, in that order. You already know how to play over all three of those chords in this context, so you should be good to go!

Example: written out below is a continuation of the earlier riff, with the last four measures of the form finished.

The turnaround is sparser than the rest of the riff, with a focus on the chords and passing tones. It has a couple of chromatic walk-ups that briefly step outside of the chords’ respective Mixolydian scales, creating a simply bluesy effect.

Below is the entire example riff written out. 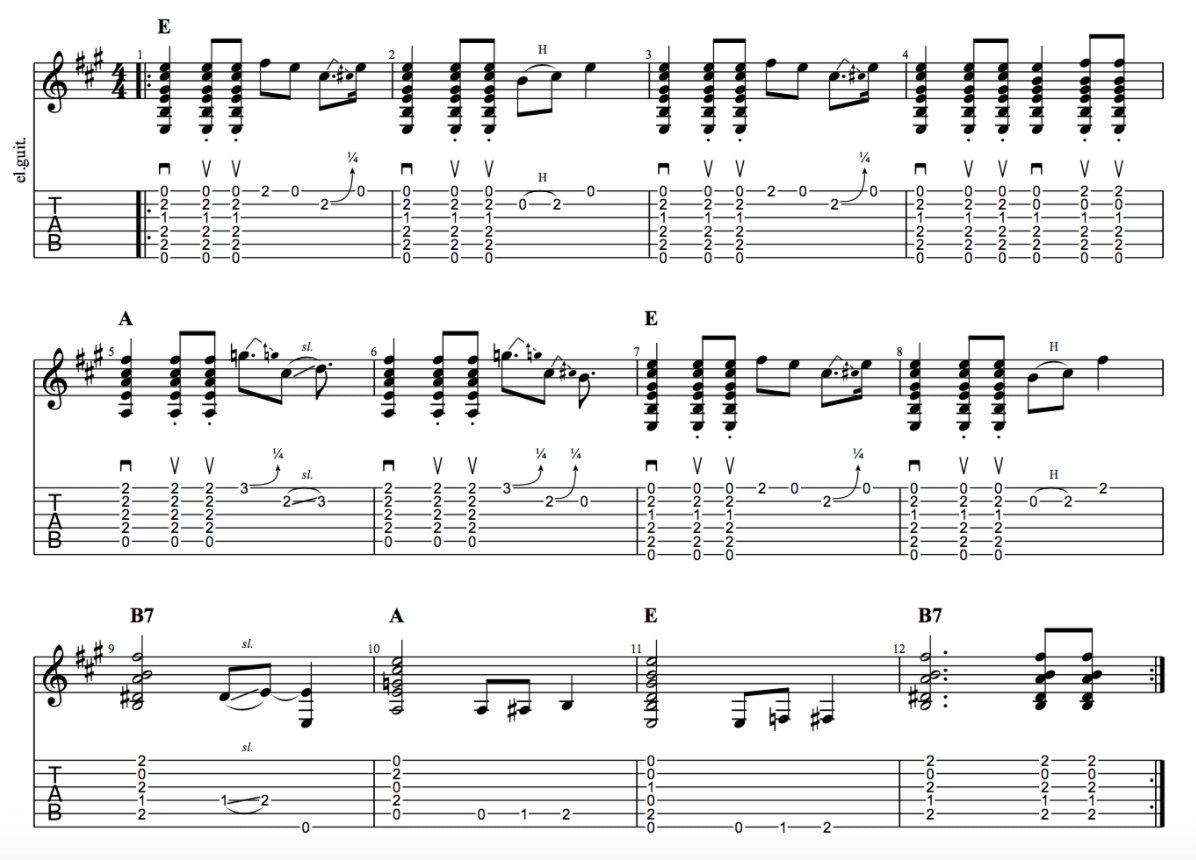