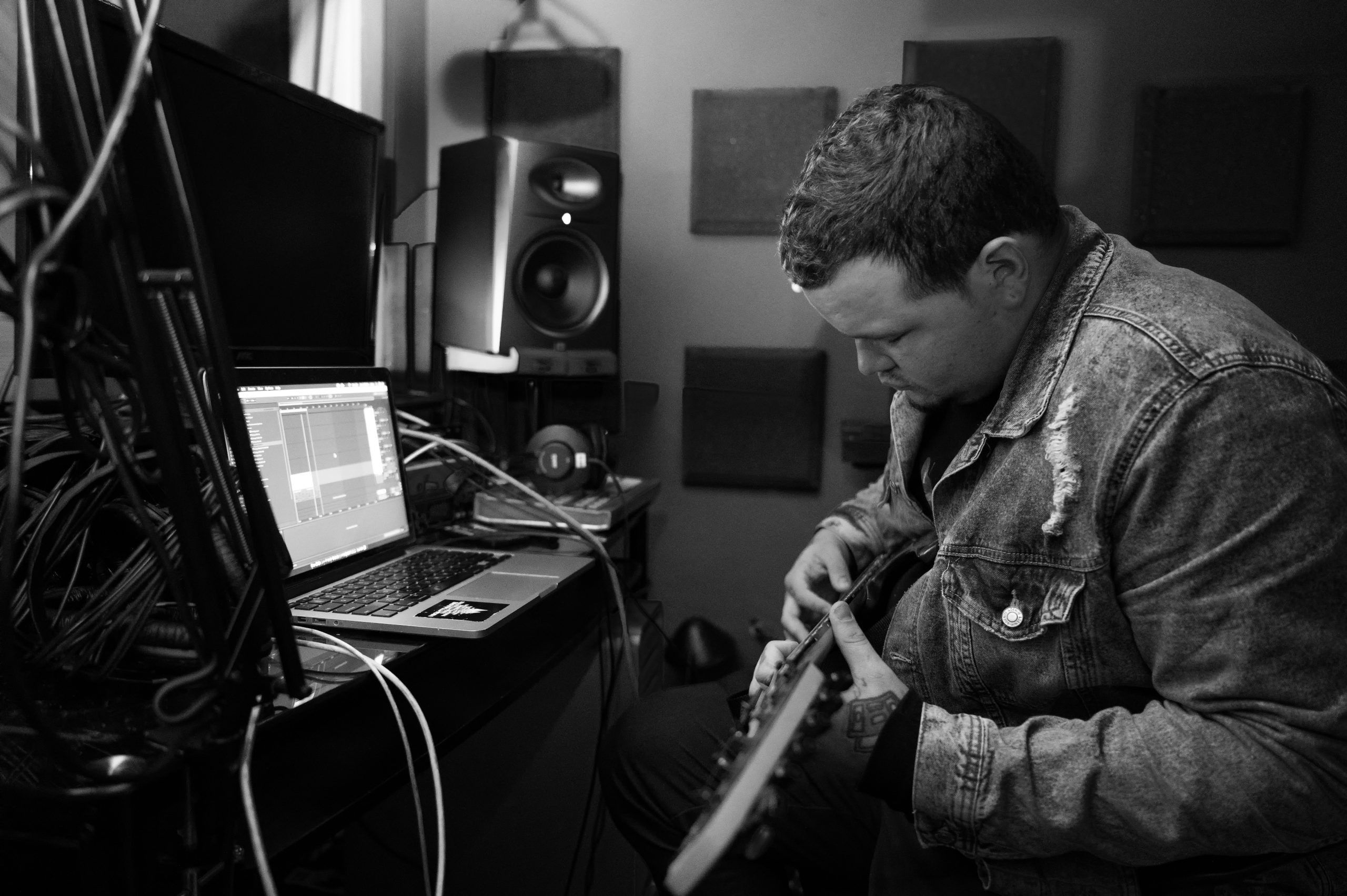 Logic Pro X (recently sometimes referred to simply as Logic Pro) is cheaper and easier to use than many other music recording softwares, but is still a very capable program in its own right. This fact on its own has made it a popular program for home recording since its release in 2013 (following the somewhat less popular Logic Pro 9). However, Logic Pro X is much more focussed on the recording and processing of live instruments than many of its contemporaries, making it the perfect recording software for many guitarists. In the article, I’ll walk you everything you need to start recording guitar on Logic Pro X today.

Setting Up An Audio Interface

If you are using an audio interface, start by plugging it into the USB port on your Mac (Logic Pro X is a Mac only software, so if you’re a Windows user then this might not be the software for you). Once it’s plugged in, click the Apple icon on the top left of your screen and open system preferences. Once you’re in system preferences, click on the sound icon, which is represented by a speaker. 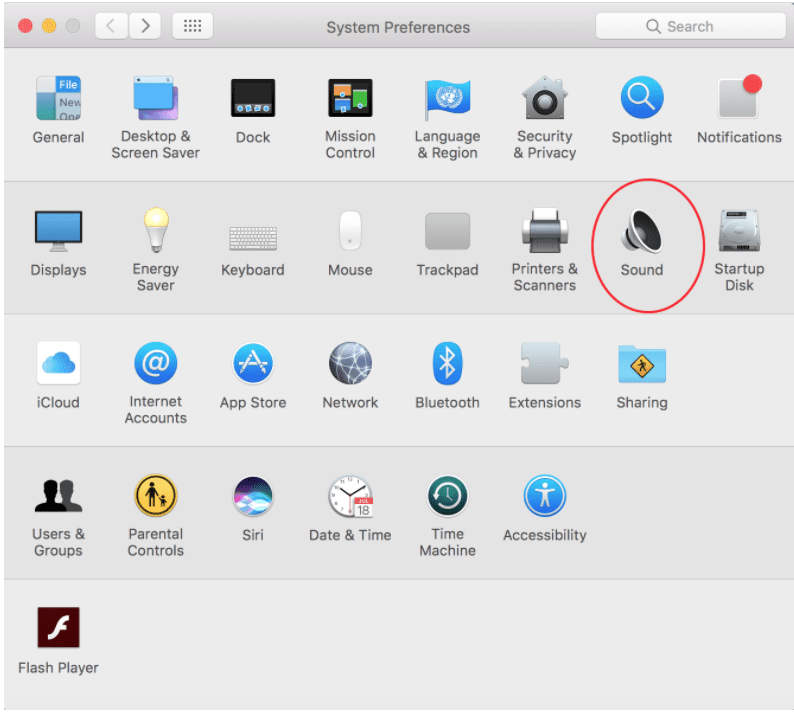 Next, select the name of your interface on both the output and input menus, thus deselecting the default settings (Internal Microphone and Internal Speakers). 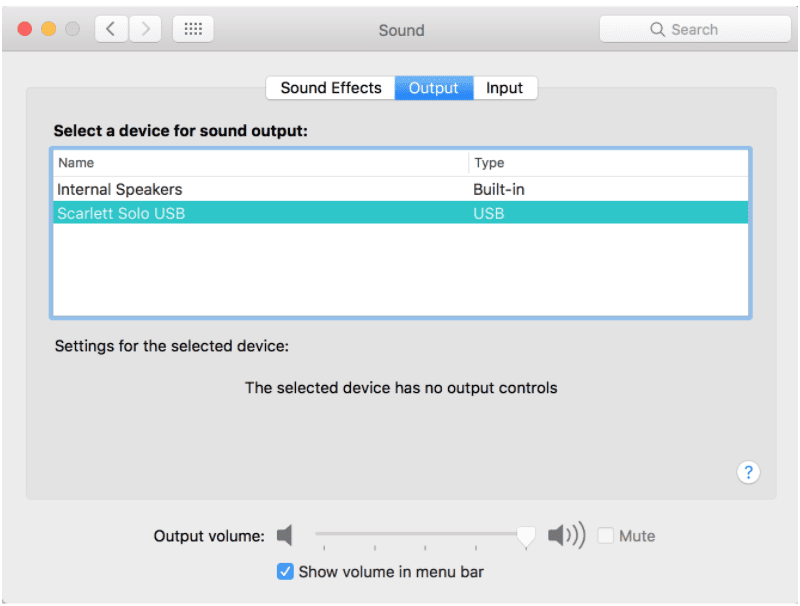 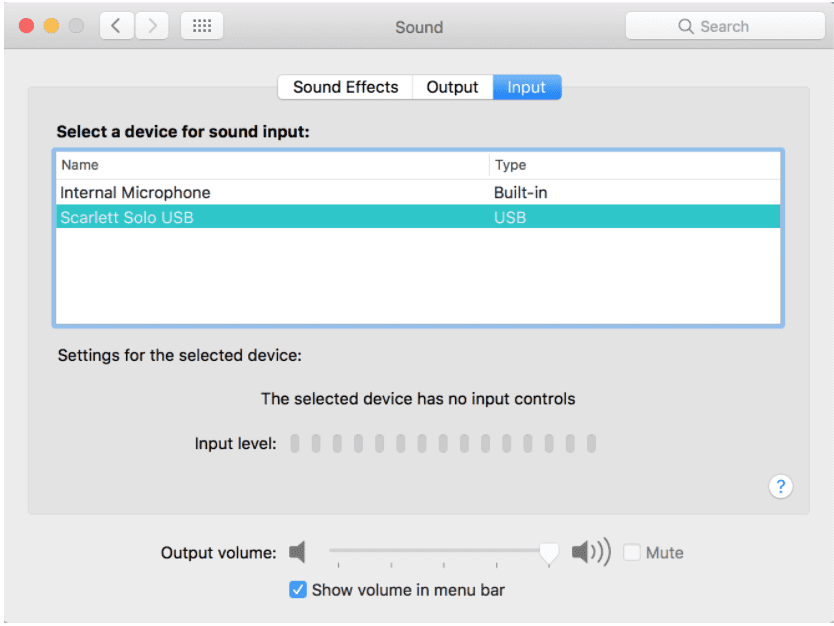 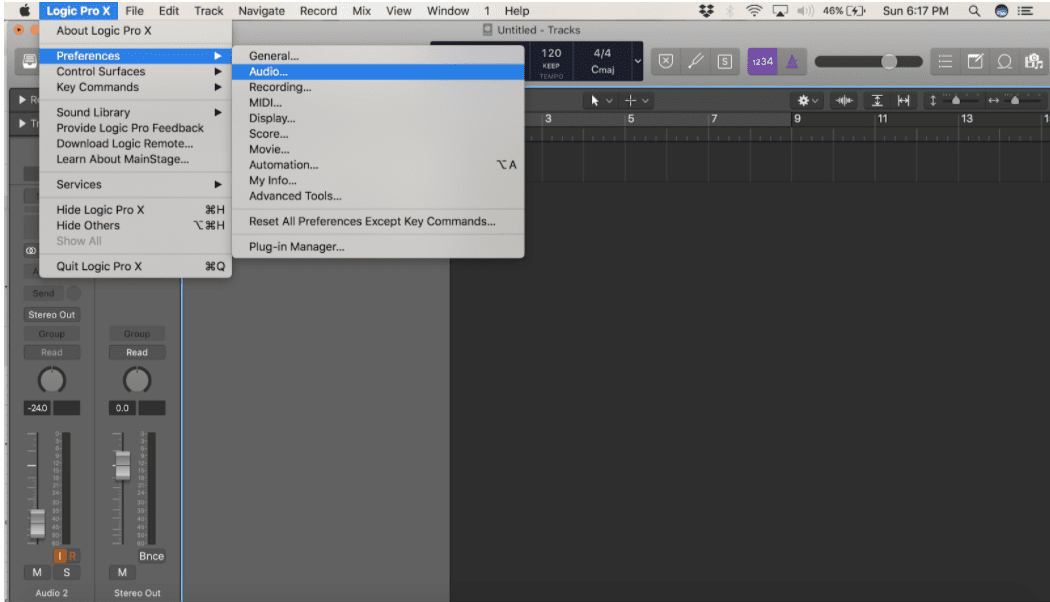 Next, click open the drop-down menus labeled Output Device and Input Device, and click on the name of your interface for both, much like did earlier in the system preferences for your Mac. After that, you should be good to go! 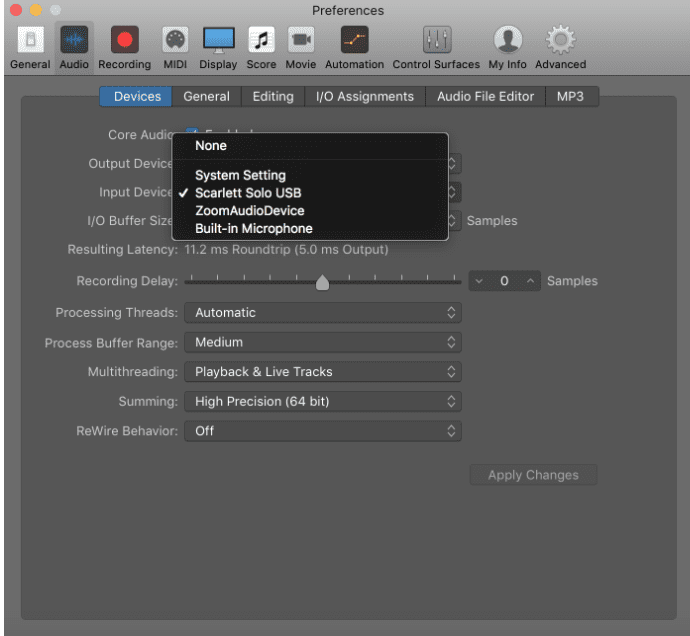 In order to record a guitar or bass part on Logic Pro X, the first thing you are going to do is create a new track. To create a track, click on the plus sign button located near the top-left of the screen. You can see the button’s location below, circled in red. 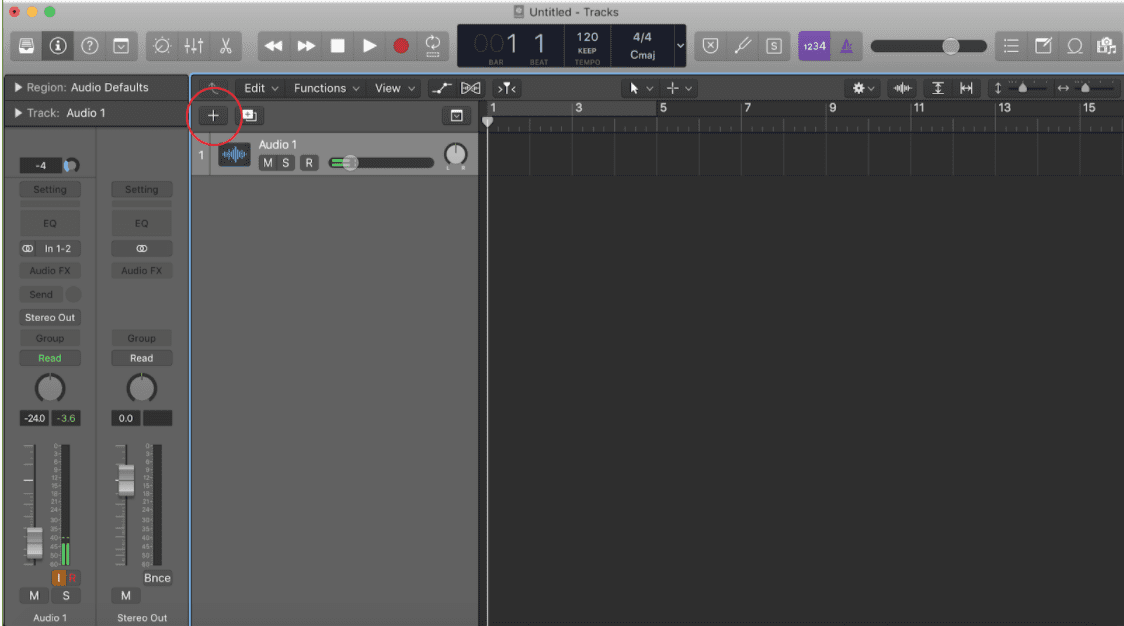 When creating a new track, a window will open presenting a variety of options, including software instrument, audio, drummer, External MIDI, and Guitar or Bass. If you’re looking to record a guitar track, you’re going to want to select audio or Guitar or Bass, but choose carefully as the options are not interchangeable. 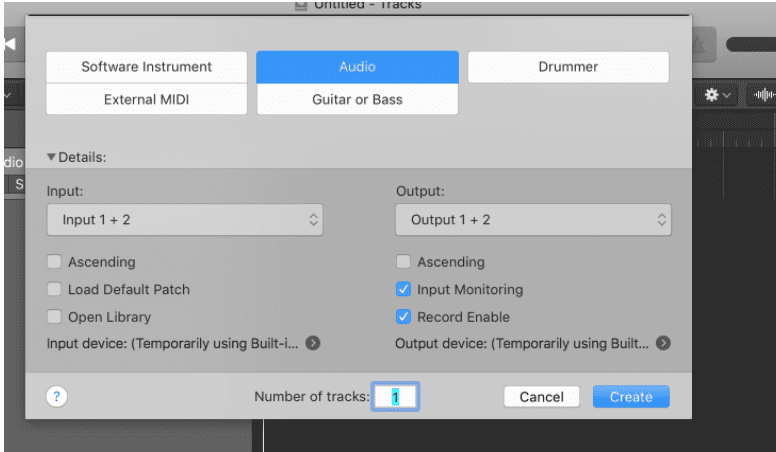 The audio option is fairly simple. If clicked on, Logic Pro X will create a blank audio track that can be used to record any sound. Your computer will by default use its built-in microphone to pick up these sounds. While built-in computer mics are entirely functional, they are substandard in quality. If you are interested in creating recordings of at least decent quality, then I highly recommend investing in an external microphone, which can be connected to your computer through the use of an audio interface. Whatever sounds the microphone picks up will be saved to the project as an unaltered audio file. The audio option is for when you’re looking to authentically capture the way an instrument sounds when played in real life, and if the common choice for recording acoustic instruments, amplified electrics, and vocals.

The Guitar or Bass option is meant for electric instruments plugged directly into your computer, likely with the aid of an audio interface as well, and without the use of an external amplifier. Plugging an instrument directly into your computer with any sort of real-life amplifier is called going direct-in (often abbreviated as DI). Going DI will give you a crisp and clear sound that is super malleable through the use of digital effects. However, going DI will give you a thinner, more artificial sound that lacks some of the punch granted by using a real amplifier. Conventional wisdom is that electric guitars sound a bit thinner than desired when going DI, while bass guitars and acoustic-electric guitars tend to suffer less when going DI. However, some guitarists have gotten great tones going DI, so it’s certainly worth giving it a shot.

When you click on the Guitar or Bass option, Logic Pro X will create an audio track with a pre-made digital amplifier. The digital amplifier’s preset can be changed and its settings tweaked in order to alter the guitar tones it creates, and it can also be changed to a variety of bass amp and acoustic-electric amp options. While it is possible to use these digital amp settings in conjunction with a microphone just as you would when recording something with the audio option, doing so is not their intended use of the  Guitar or Bass option. If you do this, you may have work cut out for you if you hope to get a clear or conventional tone. 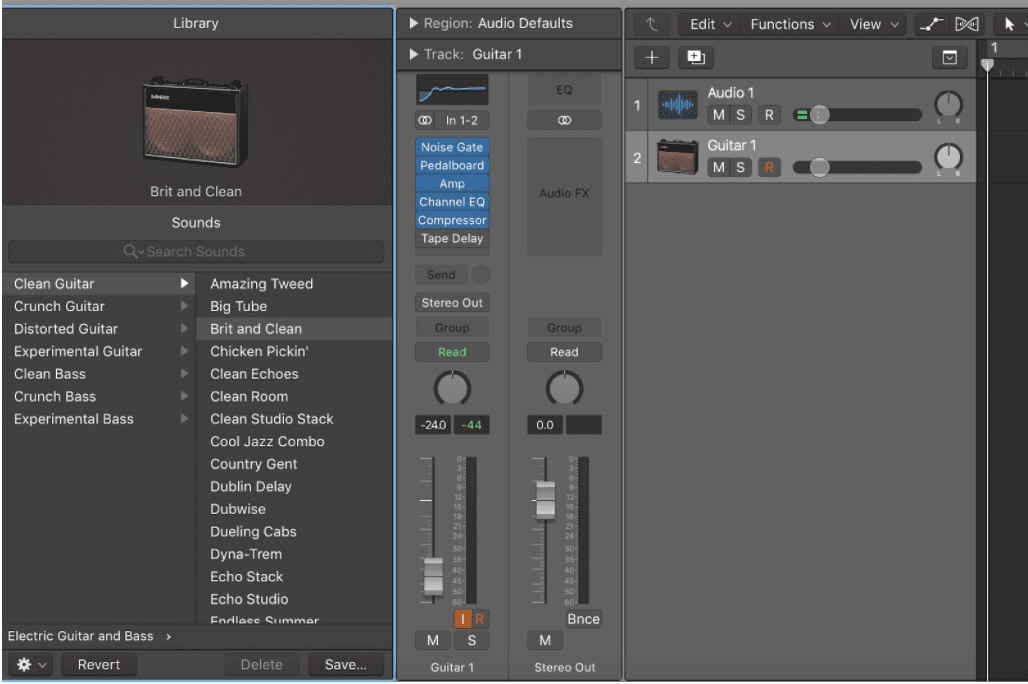 The actual act of pressing record is probably the simplest part of this entire process. Start by placing the playhead at the spot in the song where you would like the track to begin (the playhead will by default be placed at the very beginning of the song). Once the playhead is placed as desired, double-check that the button near the top labeled 1234 is selected. Selecting this button will cause the program to give you a count-in before it starts recording you. It may seem like a small detail, but that moment to get ready can make a huge difference if you’re hoping to come in in time with the rest of the tracks. You can see the count in button circled below in red. 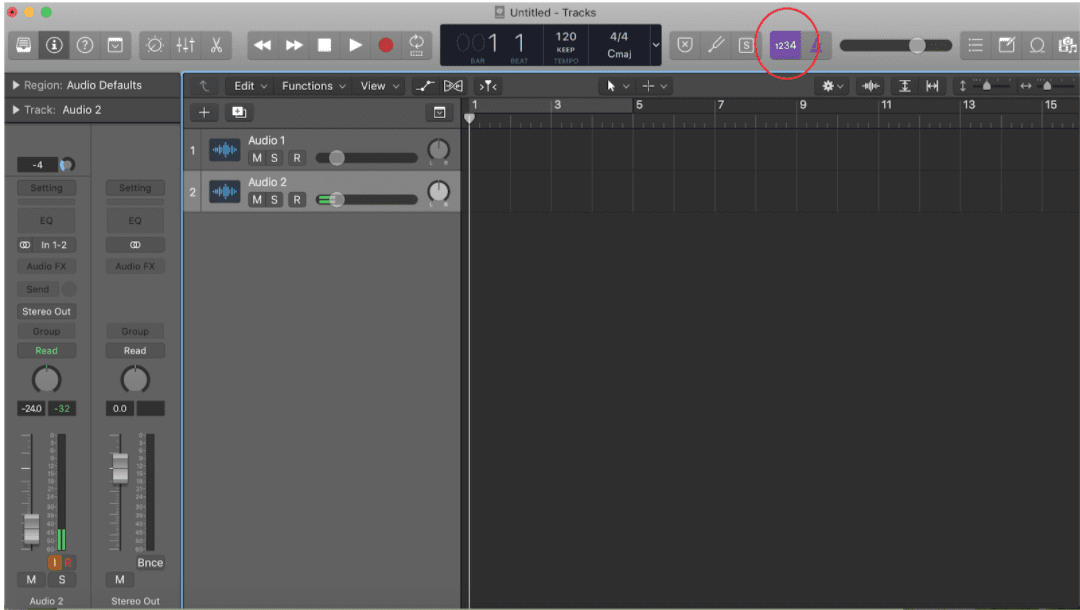 Once all that’s taken care of, it’s time record! Once you’re ready, press the big red circle button on top of the screen, slightly to the left. Once you click that red button, you’ll hear then count in, and then it’s time to start playing. 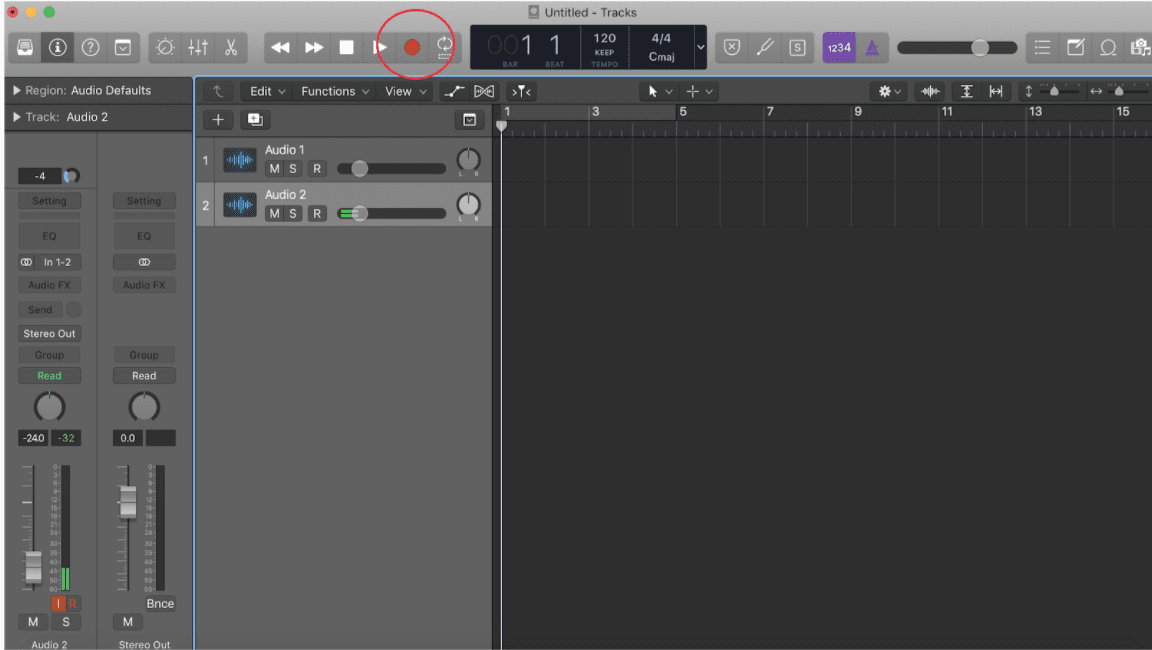 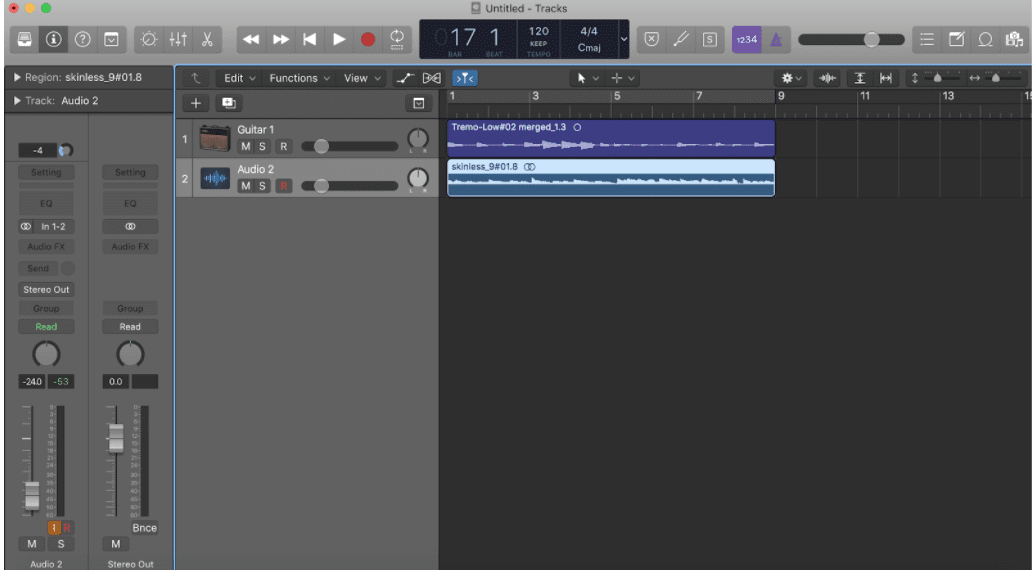