How To Play Tuplets On Guitar

Home News Blog How To Play Tuplets On Guitar

How To Play Tuplets On Guitar

Chances are that you’ve heard the word triplets before. You might even be able to play them, intuitively sensing how they fit into broader rhythmic structures. But there’s also a good chance that you don’t know exactly what a triplet is, even if you can play them accurately. Personally, it took me longer into my journey on the guitar than I care to admit before I was able to define what a triplet was, even though I had been playing them for years. I’m far from alone in that regard. That’s because music teachers, guitar books, online courses, and more often handle triplets kind of weirdly, teaching how to play them long before explaining what they actually are. The weirdest thing about that is that what they are isn’t all that complicated.

But what do you do if you want to place three equal notes, or equal five notes, or equal six notes, or any other number of notes within a beat? That’s what tuplets are for. As I mentioned earlier, triplets are the widely used form of tuplet, but tuplets can be used for just about any quantity of even notes. In this article, we’re going to learn the names of some of the most common tuplets, how to count them, and some exercises to practice them with.

AN IMPORTANT NOTE: A group of tuplets doesn’t necessarily have to be within one single beat. While tuplets are most often used to subdivide a single beat, a group of tuplets can be used to subdivide any number of beats within a given measure. For example, if you wish to chop up a whole measure of 4/4 time into three equal parts, then you would use triplets to subdivide the whole measure instead of just a single beat. I wanted to make this distinction before going further but don’t if it doesn’t make sense yet. It will by the end.

As I mentioned earlier, triplets are the most common kind of tuplets. They involve chopping up a beat or beats in three even pieces, the technical term for which is subdividing. The following exercise will help break down playing triplets.

Go to the 3rd fret on the 6th string, which is a G-note. Pick that note with three nice, even strokes in a down-up-down picking pattern. You can see that written below. 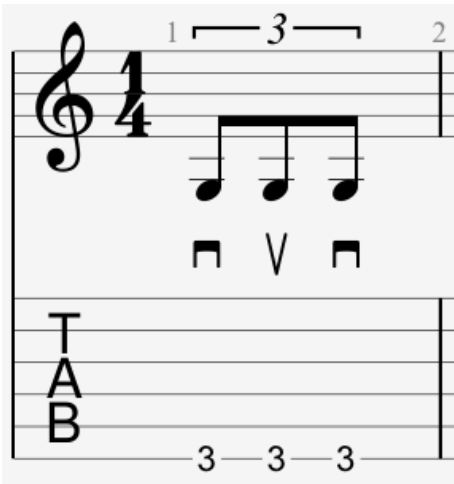 A quick note: You may have noticed the three eighth notes tied together with the number “3” above them in the above notation. This is how tuplets are written in standard notation. They are written with the closest standard rhythmic notation (in this case eighth notes), with the number you are subdividing by written above. In the case of triplets, that number will be a 3. If don’t really use standard notation, then you don’t really need to worry about all of that.

What you just played is a triplet. Now try playing that exact triplet four times in a row, with each triplet being a subdivision of a single beat. This will result in a full measure of triplets played in common time. Make sure to keep up the down-up-down picking pattern throughout the whole pattern. If you alternate pick as you might otherwise would, it’s very easy to unconsciously slip into playing straight eighth-notes instead of the triplets you’re going for. You can see the whole thing written out below. 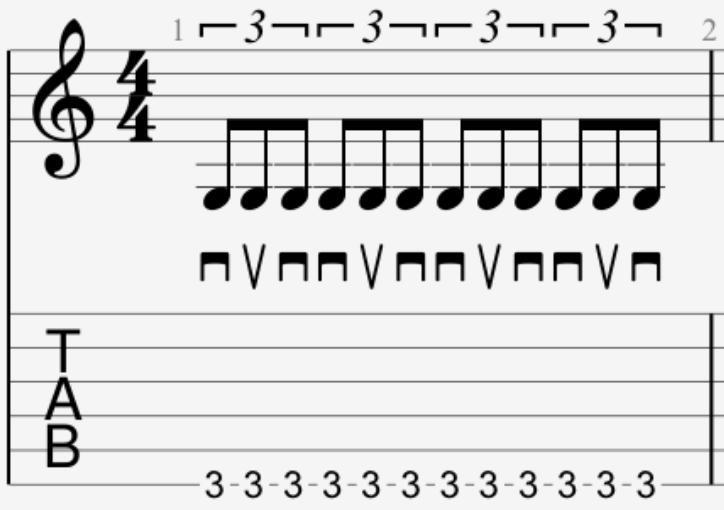 When playing straight triplets count them by saying whatever beat you are on followed by the syllables trip and let. Pick each note as you say each syllable, just as you would when counting straight eight notes. For example, you can count the above pattern by saying: one-trip-let, two-trip-let, three-trip-let, four-trip-let.

Once you feel like you’ve gotten that down, try replacing beats 1 and 3 of the above pattern with quarter notes, but keep beats 2 and 4 as triplets. You can see that all written out below. 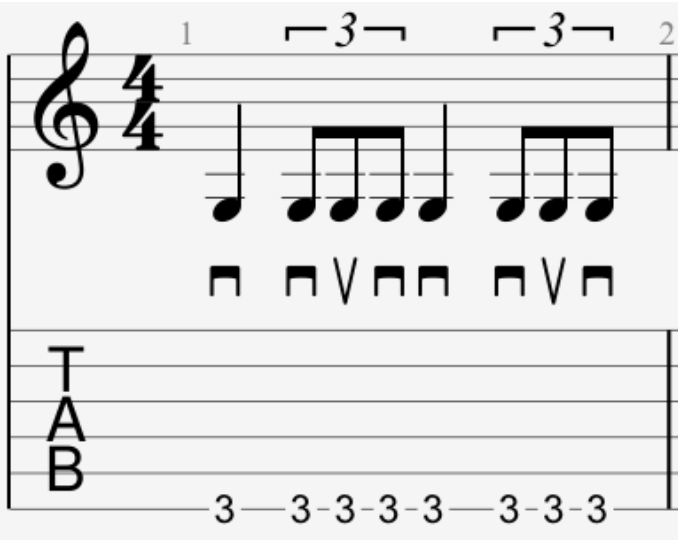 Once you’ve got the rhythm down, try replacing the single G-note with a full open G-chord, but keep the same rhythm and strumming pattern. 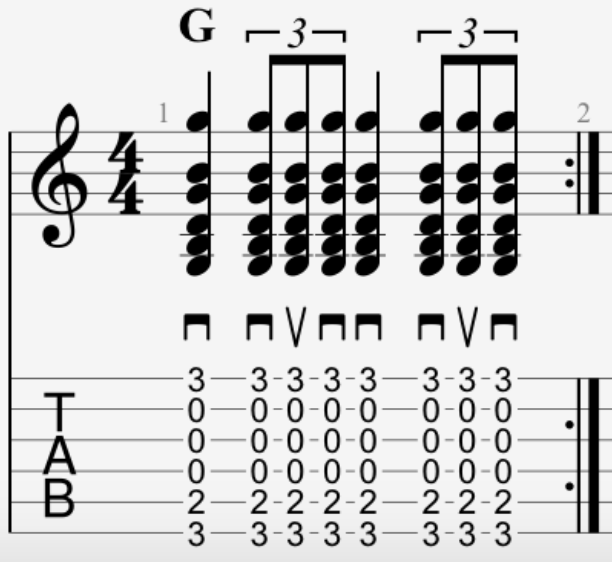 Quintuplets work exactly as triplets do, but subdividing by five instead of by three. They’re the second most commonly used tuplets after triplets, although triplets are the most common by a significant margin. Return to the G-note on the 3rd fret of the 6th string, and play it five even times with alternate picking.

Playing notes in groups of five may feel awkward at first, so keep trying until you the hang of it. Once you feel ready, try playing a full measure of common time in quintuplets, with five notes within each beat. This is going to make for a total of twenty notes within the measure. That’s quite a lot, so I’d strongly recommend starting off at a nice, slow tempo and then gradually speeding up.

Much like when playing straight triplets, it can easy to accidentally slip into out of the tuplet feel if you alternate pick the entire phrase. To combat this, make sure to down pick the first quintuplet in each beat. This will result in some repeated down-picked notes that may feel counterintuitive at first, but I promise that it will help you maintain the quintuplet feel. You can all of that written out below.

While it’s totally possible to strum chords in quintuplet rhythms, quintuplets can sound pretty busy aren’t applied to strumming patterns as commonly as triplets. Instead, guitarists are more likely to use quintuplets in riffs, leads, and other single note lines. Below is an example of a simple riff built entirely on straight quintuplets. Try playing it at whatever tempo feels comfortable.

As I alluded to earlier, you can subdivide by any amount. This means that there is technically an infinite amount of possible tuplets, so there’s a lot to experiment with! Every other tuplet works the same way as the triplets and quintuplets you learned earlier, except that you subdivide for the new amount instead. There’s a lot more to the world of tuplets than we went over in this article, but everything here is a great place to start.