When you first learn to play guitar, the focus is generally on big open chords that use all or most of the guitar’s strings. However, something that may surprise you is that some of the notes in many of your open chord shapes aren’t really necessary. This is because all of your basic major and minor chords actually only have three unique pitches in them. As a result, any basic major or minor chord where you strum four or more strings contains at least one repeated pitch that is ultimately unnecessary to the chord.

That’s not to say that there’s anything wrong with these extra notes. They can help a chord achieve a bigger, fuller sound and sometimes their inclusion is the right choice. But, just as sometimes a bigger fuller chord will give you the sound you want, sometimes the music calls for a lighter chord with less fat on it. Luckily, the fat is pretty easy to trim.

As mentioned above, basic major and minor chords only have three unique pitches in them. When you reduce a chord down to these three unique pitches, you’re cutting it down to the bare minimum it can be while still qualifying as a chord. A chord consisting just of these three pitches is called a triad. Triads play a major role in tonal music in general and guitar playing in particular, and learning them can be a great way to add variety to your chord playing.

What Makes A Triad?

The following section is a brief look into the music theory surrounding the concept of triads. Although I believe that understanding this context can help you better implement triads into your playing, it is not entirely necessary in order to start playing triads today. So, if music theory isn’t really your thing, feel free to skip this section.

Although the term triad can be used to refer to any three notes played as a chord, it is most commonly used to refer to notes that form common kinds of chords. These chord types include major, minor, diminished, and augmented chords. The commonality among these chord types is that they are all constructed by intervals called thirds. A third is found by counting up two letters in the musical alphabet from your starting pitch. For example, if your starting note is C, then a third above is E. These chords all consist of two back-to-back thirds (more commonly referred to as stacked thirds), so in order to complete the chord in our previous example, we would have to also find the third of E, which is G. This means that altogether, the notes we have are C, E, and G, thus forming a major triad.

“But how did he know that triad is major?”, you may be asking. “Did he just pick one of those chord types he mentioned at random with the hopes that no one would actually challenge his claim?”, you may be wondering. “ I hope he doesn’t try to slip any other fast ones by me with the sole intention of having me repeat this false information he has fed and thus making me look foolish!”, you may be lamenting. Well, it’s actually pretty simple.

There’s a variety of shapes one can use to play any given triad. This is partially because triads are very easy to invert, which means to rearrange the order of the notes in the chord. For example, the notes in a C-major triad are C, E, and G, as indicated in the chart above. If you were to rearrange those notes on your guitar so that the order you play them in is instead E, G, C, you are still playing a C-major triad.

Although triads can be played along any three strings of the guitar, it is most common to play triads along the upper three strings. This is for a couple of reasons; one being that triads sound punchy, bright, and all-around great on higher-pitched strings, and the other being the different tuning of the 2nd string allows for triad shapes that are much easier to voice than elsewhere on the guitar.

Below are chord charts for ten triad shapes. The shapes are for triads with root notes on the 3rd, 2nd, and 1st strings, with a major, minor, diminished, and augmented triad along each string. All of these shapes are entirely movable and can be applied to any root note.

A quick note: the shape for augmented triads is the same, regardless of which string you’re thinking of as containing the root note. This is why there are only ten chord charts included below. This is because augmented chords are odd from a music theory perspective, and every augmented triad is also an inversion of two other augmented triads. 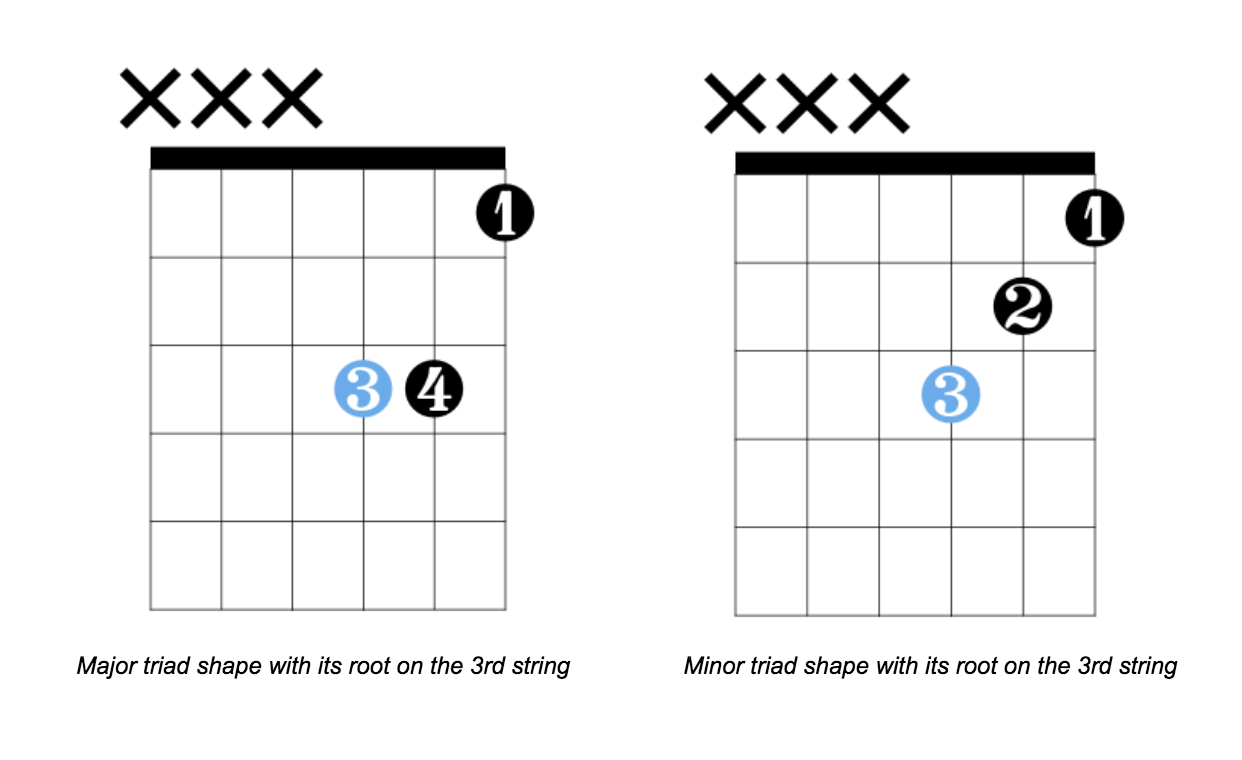 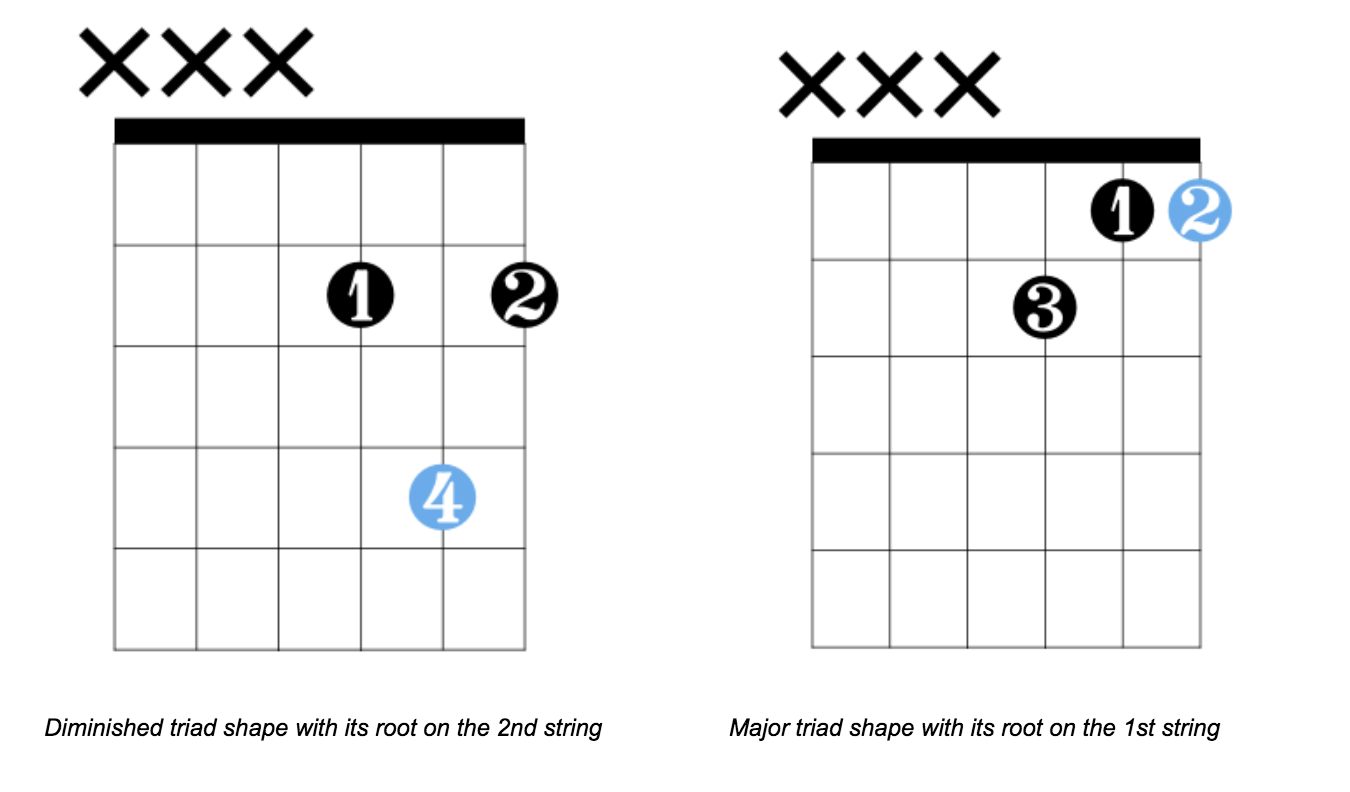 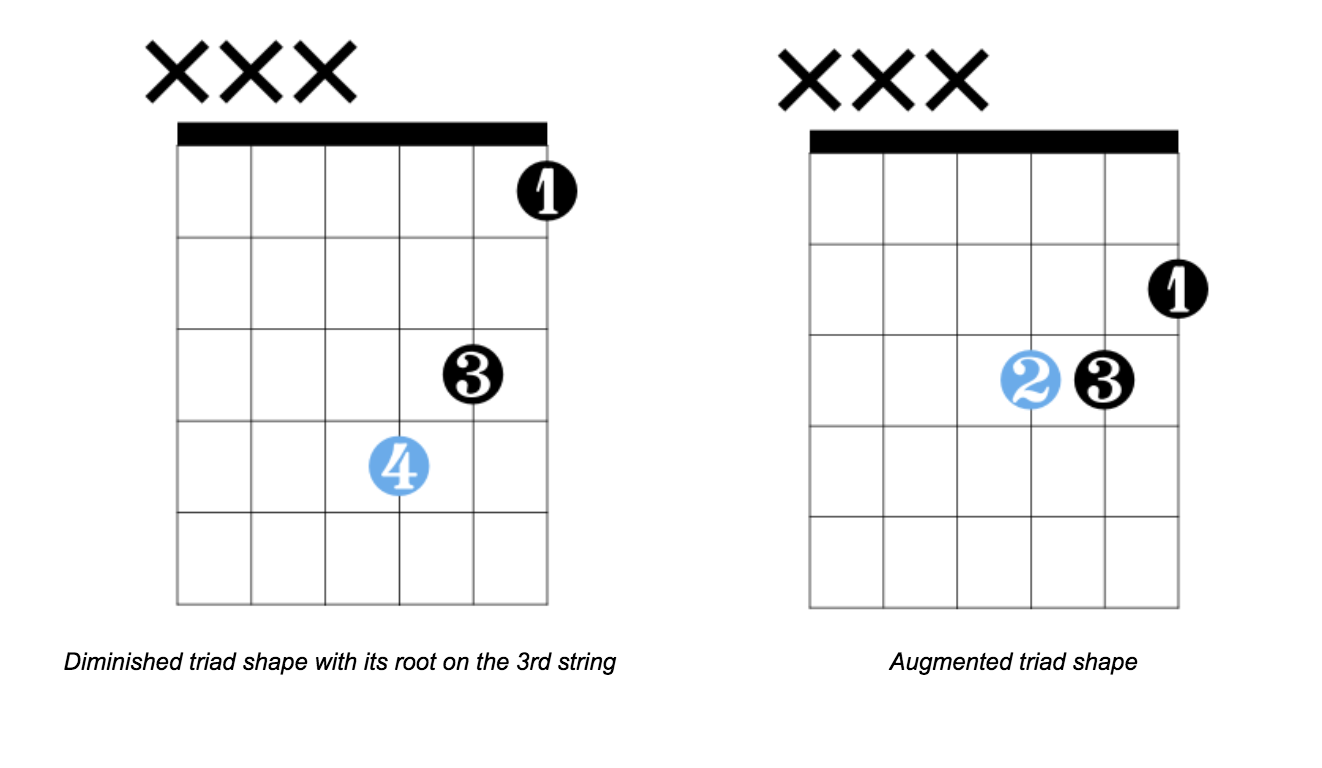 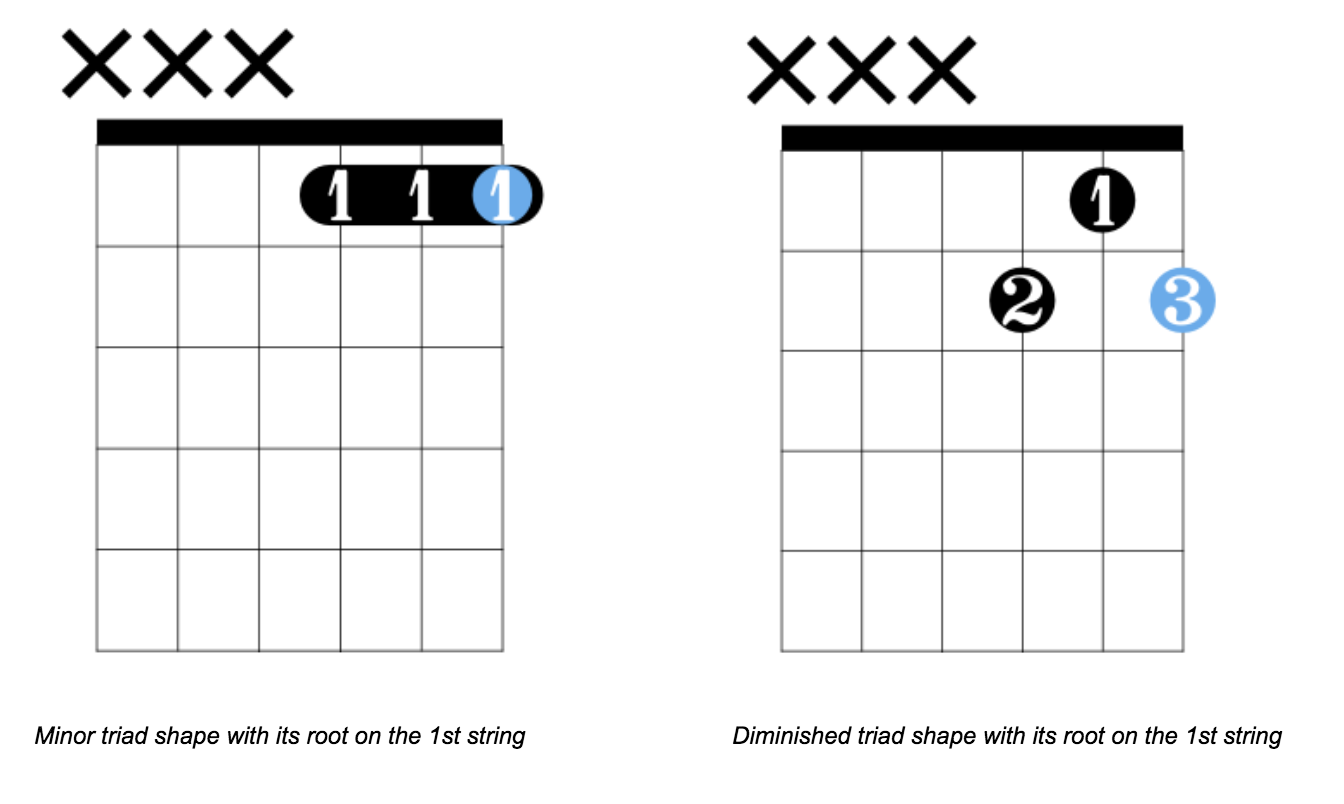