How To Play Pull-Offs

How To Play Pull-Offs

Hammer-ons and pull-offs are a pair of closely related guitar techniques that involve playing notes that smoothly blend into each other, creating an effect known as legato. Legato playing allows you to create buttery guitar lines where seamlessly bleed into each other in a way that, when done well, can be quite beautiful. Hammer-ons and pull-offs aren’t the only ways to achieve a legato sound on guitar, but they are among the most common. Additionally, they form the foundation for such guitar techniques as trills and tapping, and are an important skill for any guitar player.

In this article, we’re going to go over both how to play pull-offs and how to incorporate them into your playing. In a previous companion article, I went over the exact same sort of thing with hammer-ons. I recommend learning hammer-ons first as they tend to be a bit easier and more intuitive to grasp, so if you don’t already know how to play hammer-ons then I suggest reading my article on hammer-ons first, and then return to this article.

To play your first pull-off, start by finding the 7th fret on the 4th string, and place your ring finger there. Next, place your index on the 5th fret of the same string. Your index finger should be placed behind your ring finger, which should remain resting on the 7th fret. Don’t worry about the fact that you have two fingers on the same string; a single guitar string can only produce a maximum of one pitch at a time. The pitch that rings out will be whatever the highest fretted note is, regardless of how many notes you are fretting beneath it. So therefore, when you pluck the string it will sound the same as if you’re only fretting the 7th fret.

Speaking of plucking the 4th string, why don’t go ahead and do just that?

As the note rings out, try subtly pulling down the string with your finger in a motion not dissimilar to a string bend. Just as you hear the not begin to rise in pitch (as will happen when you bend a guitar string), sharply pull your ring finger off the string. When you pull-off with your ring finger, it’s important that you leave your index finger anchored on its spot on the 5th fret. As you pull-off from the 7th fret, that note on the 5th fret is what will sound out. You can see that tabbed out below. The notes connected by a line with the letter P above them indicate a pull-off, as you could probably guess.

It might be a little tricky to get the motion at first, but you’ll know that you’re doing it right once you hear two distinct pitches from your one pick stroke; the first pitch being the note of the 7th fret, and the second pitch being the note on the 5th fret. Keep trying until you get it, and don’t feel discouraged if it takes you a bit of time to do so. That’s totally normal! Also, don’t worry if the note you pull-off to sounds quieter and has less sustain than the note you picked. That’s just the way pull-offs sound, and especially so if you’re using an acoustic guitar.

Once you feel like you’ve gotten a hang of the pull-off above, try integrating it into the riff below. The riff begins with that exact hammer-off you just played and ends with a short chromatic (as in moving one fret at a time) walk-down on the 5th string. 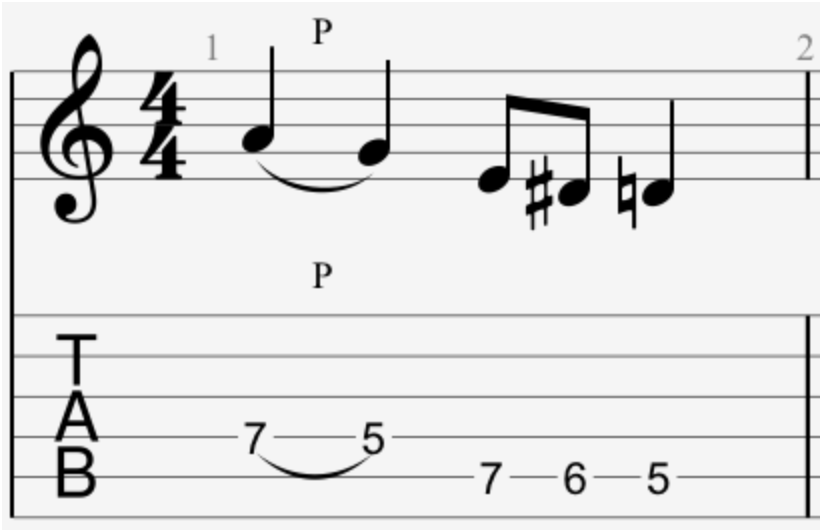 When you feel like you’ve gotten that riff down, try your hand at this more complex one: 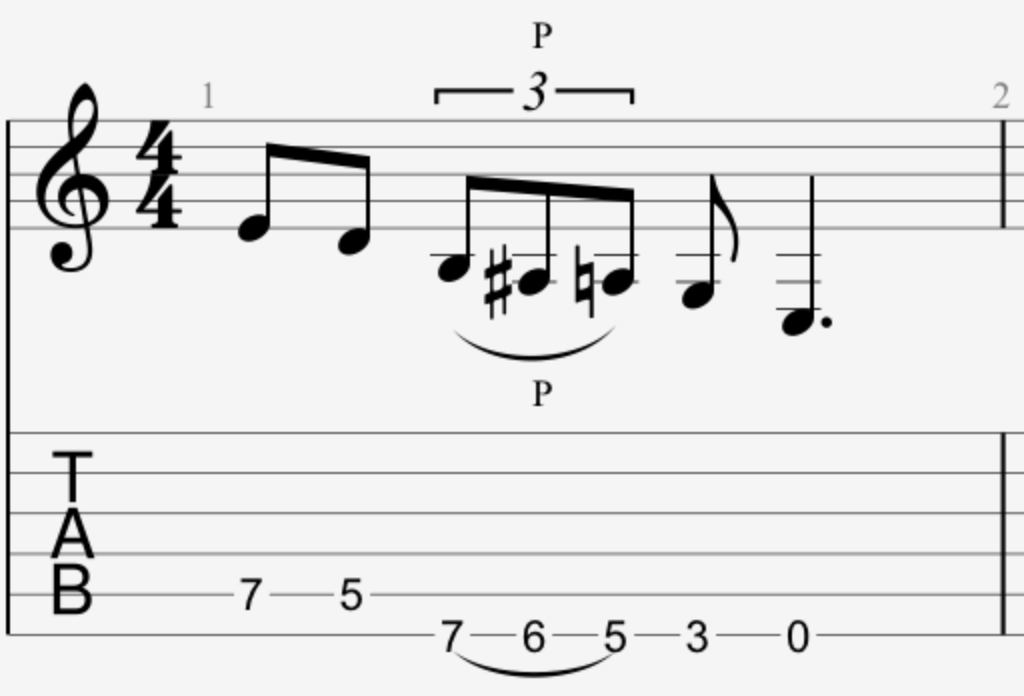 The above riff is a descending line that’s a bit busier than the previous riff. The pull-offs are going to start on the 7th fret of the 6th string and, as suggested by the fact that the pull-off line encompasses three notes instead of two this time, you’re going to three different notes out of that single pick stroke. In order to do this pull-off, start by placing your ring finger on the 7th fret of the 6th string. Then, pull-off onto the 6th fret with your middle finger, and finally onto the 5th fret your index finger.

If you’re playing this riff at a slow enough tempo, then it might be worth it to line up all three of those fingers on the 6th string just before you begin the pull-off so that everything is already in place. However it would be difficult to do that in time at most ordinary tempos, so if you’re playing the riff at a decent enough speed you’ll probably be best off just adding each finger as you arrive at it.

Once you feel confident playing both of those riffs on their own, try combining them as written out below:

Typically, it’s trickier to pull-off notes from chords than it is to hammer them on, and as a result it’s done somewhat less. However, one very common use of pulling-off notes from chords is to undo a hammer-on. To be clear, I don’t mean undo as in covering up a mistake (although there’s nothing wrong with doing that when you have to). What I’m referring to is returning to the chord quality you were playing before you implemented a hammer-on.

Return to the Hammering-On With Chords section at the end of the previous article hammer-ons [insert a link to “How To Play Hammer-Ons”]. Please review the exercise described there, and if you haven’t read the article yet, then please familiarize yourself with it. Once you feel ready, play the Amb6 chord as described in the exercise. There’s no need to hammer on the flat-sixth as you do in the exercise. For now, just play the chord as you normally would. 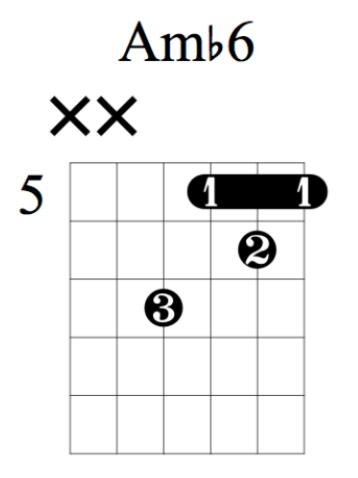 Once you’ve got the Amb6 shape down again, try using your middle finger to pull off from the 6th fret on the 2nd string to the 5th fret on the same string. As you’re already barring that string with your index finger, there’s no need to move any finger other than your middle finger. When you pull-off from that note on the 6th fret, you are going from an Amb6 chord back to a regular Am chord. It’s essentially the final hammer-on exercise you did earlier, but in reverse. You can see it all written out below. 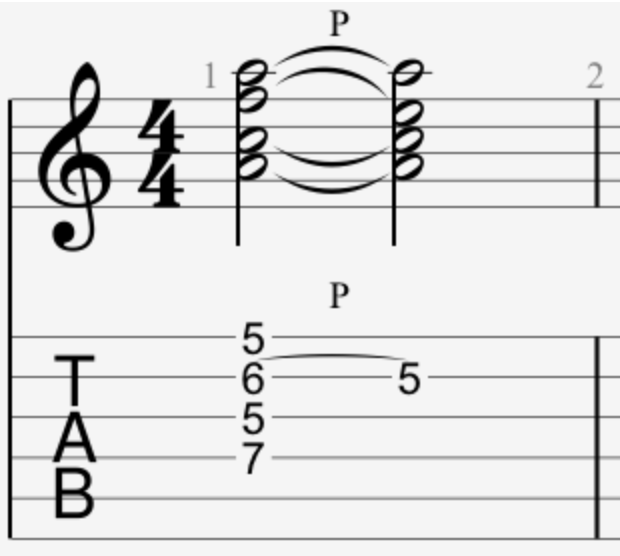 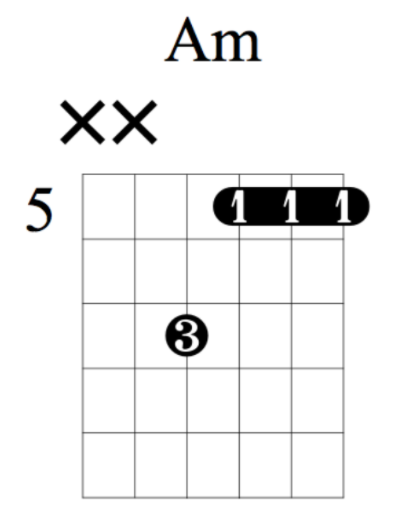 Once you feel up to it, try combining the final hammer-on exercise from the previous article with this pull-off exercise. In order to do this, start by playing the above Am chord shape. Then, hammer on the 6th fret of the 2nd string with your middle finger, thus changing the chord to an Amb6. Finally, pull-off the 6th fret note, returning the Am chord you started on. Remember that you are both hammering-on and pulling-off that note on the 6th fret, so you are only going to be strumming the full chord once (so make sure you get a nice, solid strum). You can see all of that written out below. 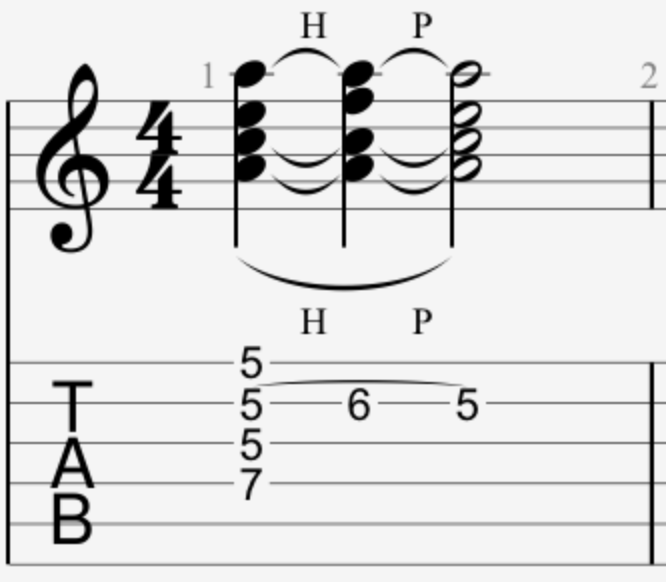 Try messing around with some of the cool hammer-ons you found earlier. Now, try pull-off from those hammer-ons, returning to whatever you were playing before. Combining hammer-ons and pull-offs can be a great way to add subtle ornamentation to your playing and to take your guitar playing to the next level!