How To Play Hammer-Ons

How To Play Hammer-Ons

Hammer-ons and pull-offs are a pair of closely related guitar techniques that involve playing notes that smoothly blend into each other, creating an effect known as legato. Legato playing allows you to create buttery guitar lines where seamlessly bleed into each other in a way that, when done well, can be quite beautiful. Hammer-ons and pull-offs aren’t the only ways to achieve a legato sound on guitar, but they are among the most common. Additionally, they form the foundation for such guitar techniques as trills and tapping, and are an important skill for any guitar player.

The hammer-on technique is used to play a pair of legato notes along the same string that go up in pitch. The following exercise is created to help you play your first ever hammer-on.

Keep repeating this motion of picking the 4th string while your index is on its 5th fret, then smoothly adding your ring finger to the 7th fret. The goal is to get two distinct, clear notes to ring out from your single pick stroke. The first of these notes should be the pitch along the 5th fret, which is a G, and the second should be the pitch along the 7th fret, which is an A. It’s normal not to get it at first, so don’t worry if it takes you a bunch of tries! Just keep it until you’re able to get a pair of smooth, clear notes out of it. If it helps you to visualize it, this exercise is written out in tablature below. In guitar tab, the curved line with the letter H above indicates a hammer-on.

Once you feel like you’ve got a hang of the above hammer-on, try incorporating it into the bluesy riff written out below. The riff starts with three notes played normally (as in not containing any hammer-ons), and then ends with the exact hammer-on you were just playing. Here it is: 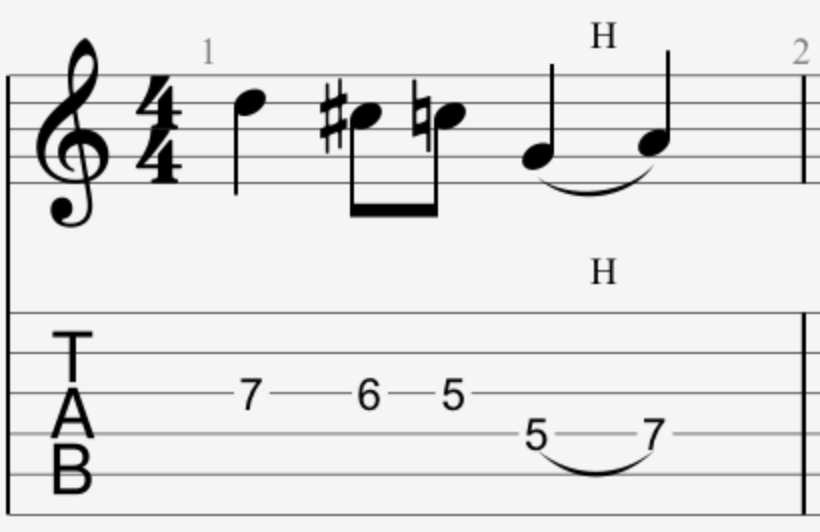 Once you played through that riff to your satisfaction, try your hand at the following similar but slightly trickier riff: 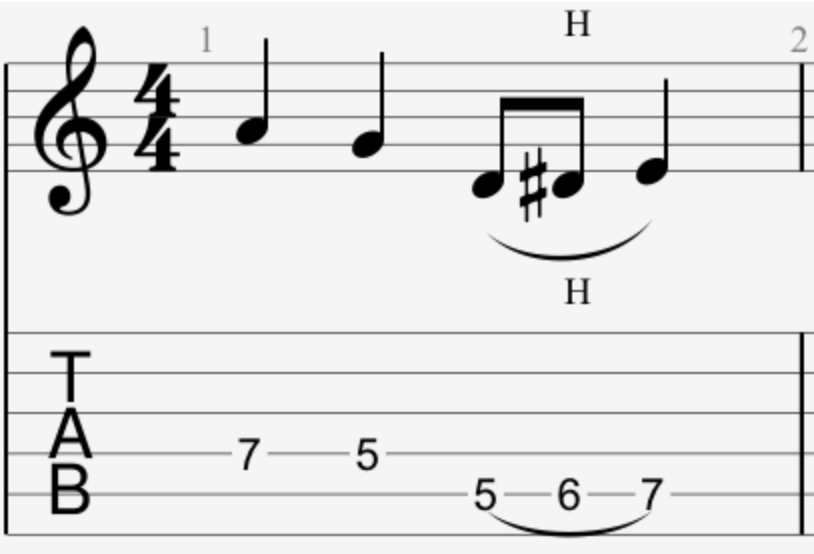 You probably noticed that in the above riff, the hammer-on line extends over an extra note than it did in the previous example. That’s because in this riff, you’re going to hammer on both the 6th and the 7th frets on top of the starting note on the 5th fret. Even this time though you’re playing three notes instead of two in your hammer-on, it’s all still within one single hammer-on. This means that you’re still going to only pick that 5th string once between all three of those notes.

In order to execute this hammer-on, starting by picking the 5th fret on the 5th string as you normally would. Then hammer-on the 6th fret of the same string with your middle finger, then hammer-on the 7th fret with your ring finger. As I said, this example is going to be a bit trickier than the last one, but keep trying it until you get both hammer-ons to ring out as smoothly as you got the hammer-on in the previous example.

Once you feel up to it, try combining the riffs into one bigger riff, as is written out here:

Before you move on to pull-offs, there’s one last hammer-on related topic I’d like to discuss: hammering-on when playing chords. Hammering-on a note or two to an existing chord shape allows you to subtly alter with a chord’s extensions and quality and can even help you navigate from one chord to the next in a progression. For our example, we’re going to use a common minor barre chord shape that has its root along the 4th string.

To play this chord, place your ring finger on the 7th fret of the 4th string. That note is your root note. Next, barre the 5th fret of the 3rd, 2nd, and 1st strings with your index finger. Strum the top four strings, omitting the 5th and 6th strings entirely. As your root note is the note you are playing along the 4th string, which right now as an A, you can probably deduce that you are currently playing an A-minor chord. As is the case with all barre chords, the shape is totally movable and can be placed anywhere along the fretboard. You can see a chart for the chord below. 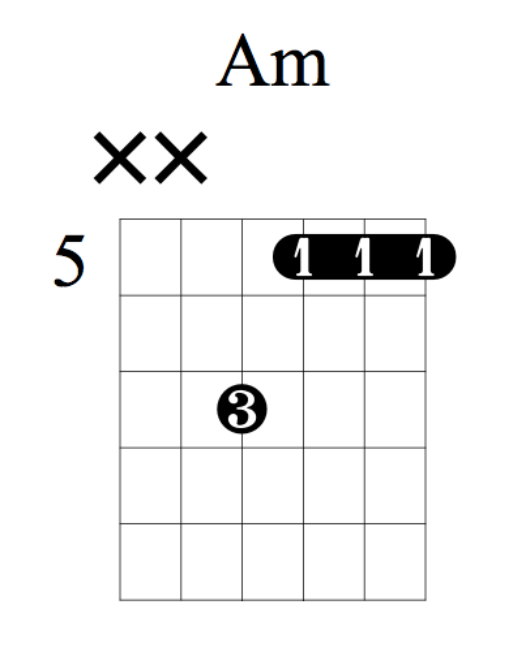 Once, you’ve found this chord shape, strum it. As the chord is still ringing out, try hammering-on the 6th fret of the 2nd string with your middle free, which should currently be free. As you hammer-on this new note, make sure not to mute or muffle the 4th, 3rd, or 1st string as they continue to ring out. The only note that should be affected by this hammer-on is the note on the 2nd string. You can see that tabbed out below. 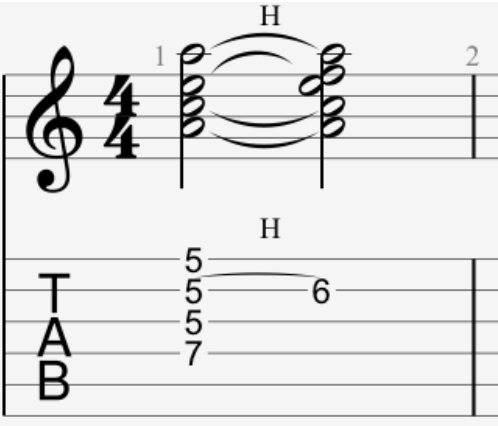 Here’s a quick music theory dump. The new note we’re hammering on is an F, which, in relation to our root note of A, forms an internal called a flat sixth (also known as a minor sixth). If you add a flat sixth interval to an existing minor chord, it creates a chord it is aptly named a minor flat sixth chord (the shorthand for which is Amb6). So, when you hammer on that F-note, you are moving from an A-minor chord to an Amb6. You can see that chord charted out below. 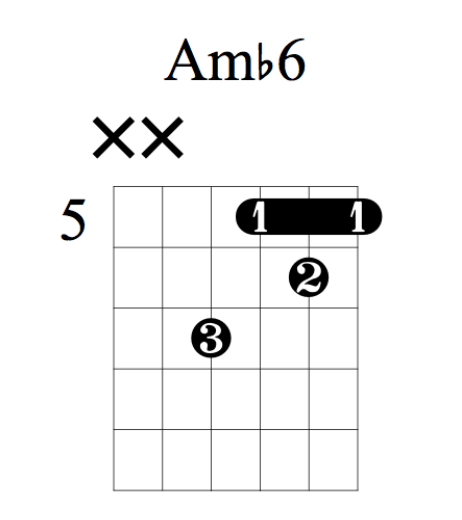 Using hammer-ons (and, to a slightly lesser extent, pull-offs) to play chord qualities is a very common practice that allows you to really flesh out a chord progression. Jimi Hendrix is an example of a player who was really great at doing exactly that, and this trick was a pretty big part of his distinctive sound.

Play some of your favorite chord shapes that leave at least one of the fingers on your fretting hand free. With any free fingers you may have, try hammering-on nearby notes in the exact manner you just did with the Amb6. See what chords and sounds you can create. Some of the things you try might not sound great, but I bet you that some of them will.