How To Play A Twelve-Bar Blues In Any Key

How To Play A Twelve-Bar Blues In Any Key

Have you ever been having fun jamming with some friends, only to have one of them yell “Let’s try a blues in D!”. Then you watch in abject horror as everyone else effortlessly jumps into a set of chord changes you don’t know and no one takes the time to explain to you? Teary-eyed, you watch your friends tear through some righteous blues licks as your unplayed guitar grows in your lap. When I first started playing guitar, that situation actually happened to me quite a few times, with only mild exaggeration.

A twelve-bar blues is one of the most common musical progressions in the world. Not only is the foundation of the blues itself, but it’s used widely in rock and roll, jazz, country, folk, soul, bluegrass, and more. So regardless of what kind of music you like to play, being familiar with a twelve-bar blues is a useful skill for any guitarist. And as I alluded to earlier, it’s something pretty standard of all sorts to jam together. Luckily, a twelve-bar blues is a rather simple form and is pretty easy to learn. What can be a little trickier is moving that form from key to key, but we’ll get to that a little later.

There’s nothing misleading about the name of a twelve-bar blues. It’s exactly what it sounds like: a blues form that spans twelve measures. Even if you’re unsure as to what exactly defines a blues form, you probably have a notion of what it sounds like, as few other musical forms have their fingerprints so thoroughly smeared over all kinds of American popular music. A typical blues progression consists of three main chords: the I chord, the IV chord, and the V chord. Exactly what each of those chords are changes depending on the key, but the pattern always stays consistent.

Below is an example of an archetypal twelve-bar blues in the key of A.

Try playing through the above chord twelve-bar blues progression. Any voicings you know for the above chords are acceptable, but the whole chord progression can be easily played with open chords. If you are unfamiliar with any of these chords, the open chord voicings for all three are charted out below. You can also substitute them with their simple major chord equivalents (A, D, and E), but you will lose a bit of that gritty blues sound if you do so. 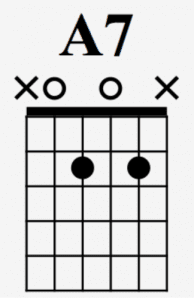 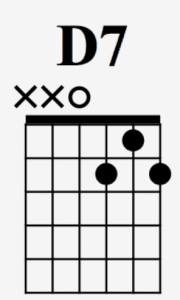 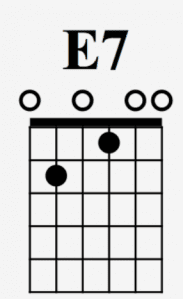 The above progression is based upon those I, IV, and V chords mentioned earlier. In an A-blues, the I chord is an A7, the IV chord is a D7, and the V7 chord is an E7. We’ll get to why that is in a sec (although there’s a chance you may have already cracked the formula just by eyeballing it). But first, we’re going to rewrite the chord chart you just played, replacing each chord with its numerical value.

But how do you know which chord to play during the I, during the IV, and during the V?, you may be wondering. To answer that question, we’re going to have to dip into some music theory, but I promise that it’s not going to get very complicated.

The I chord will always be the chord that shares the name as the key you are playing in. The blues progression you played through earlier was in the key of A, so the I chord was an A. If the key was A minor, then the i chord (the roman numerals are stylized with lowercase letters in the case of minor chords) would be an A-minor. The reason I had you play an A7 instead of an A-chord is that in blues music, it is typical to replace all major chords with their dominant-seventh equivalents.

The IV and V chords are found by counting up the musical alphabet from the I chord, and adding sharps or flats as applicable. So in the key of A, the I chord is an A, the ii chord is a B-minor and the iii chord is a C#-minor (neither of which are used in a typical blues pattern), so therefore the IV chord is a D. We only have to count up one more letter to find the V chord, which is an E. This gives us the chords A, D, E. As we’re playing a blues, we can change each them to a dominant-seventh chord, giving us the final chords of A7, D7, and E7.

There are reasons why the ii and iii chords were minor and why the iii chord was a C#-minor and not a C-natural-minor, but none of them are particularly relevant to what we are currently working on. If you’re curious, it has to do with how keys are constructed. But that’s a topic for another time.

Moving The Blues To Other Keys

Now that you have an understanding of how a twelve-bar blues pattern works, let’s try applying it to some keys other than A. A is a great key to start with because you’re literally just counting up the alphabet, but you’re only likely to be playing in it a fraction of the time. For the sake of the exercise, we’re going to work through what the chords would be in a twelve-bar blues in the key of D.

The I chord is will share the name of the key, so in this case the I chord is a D. The ii chord is an E-minor and the iii chord is an F#m, which brings us to the two chords relevant for our purposes. Therefore, the IV chord is a G. Since there is no H-note in tonal music, after G# we restart again at A, making the V chord an A. That leaves us with these chords: D, G, A. Since we’re playing a blues, it’s customary to change them all to dominant-seventh chords, giving us the final chords of D7, G7, and A7. You can the final product charted out below.

Two of the above chords were already covered when we went over a blues in A earlier, but the G7 is a potentially new chord. If you are unfamiliar with it, the open position version is charted out below. 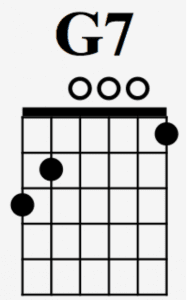 A great way to practice this skill is by figuring twelve-bar blues in new keys, and then play through the resulting progressions. And that’s all there is to it!

About the Author
Ben Fitts is a musician, writer, and instructor at New York City Guitar School. He is the guitarist of the indie rock band War Honey, the author of numerous works including the short story collection My Birth And Other Regrets, and a former NYC Guitar School student himself.
Social Share
2 Comments