My approach to learning and teaching guitar is deeply informed by the many years in which I studied martial arts. I often think of this quote from Bruce Lee:

“Before I learned the art, a punch was just a punch, and a kick, just a kick.

Now that I understand the art, a punch is just a punch and a kick is just a kick.”

As a beginner in any discipline, we are unconscious of technique. A musical novice doesn’t know what key or time signature a song is in–or even that keys and time signatures exist. They may enjoy hearing an expert play music, but are unaware of the nuances of finger angle, pick attack, voicings or dynamics.

A beginner guitarist remains mostly unconscious of technique and theory. They may learn their first chords without considering the effect of wrist and arm position on posture and comfort, or that finger angles affect tone and string clarity, or that holding a pick tighter or looser or at a different angle affects tone and dynamics.

But not for long. We learn to identify strings, optimal fingerings and subdivisions of the beat. We go from being shocked to hear that our first G chord is only one of many different chord voicings and finger configurations all over the guitar neck, to understanding how scales lay across the fingerboard and how notes relate to create harmony.

The student is learning the art! Now, music is not just music and guitar playing is not just playing guitar. Instead, they are intersecting skills and perspectives of theory, technique, time signatures, pick angles, voicings, strum patterns and more collide and interact with repertoire.

And then–perhaps, over time and with much practice–at some point, a chord is played unconsciously, yet perfectly…the guitarist follows a chord change unconsciously, because it feels right…or hears a line in the mind and finds it on the guitar.

In my 20s, I practiced guitar for hours each day–songs, rhythms, scales, chords, voicings. In those days internet tabs didn’t exist, so I learned from listening, sometimes hitting “rewind” on my cassette tape player hundreds of times to learn how to play a single solo. I was immersed in technique and theory, and I often worked on learning new guitar parts until I fell asleep with my guitar in my hands.

One night I dreamed vividly of playing the solo I’d been trying to learn. In my dream, I played it with confidence and clarity.

My eyes opened in the darkness. I felt completely alert. I reached out for my guitar with absolute certainty that I knew how to play the solo, and I played it note for note, perfectly, listening in amazement and staring at my hands. How did they know what to do?

This experience was pivotal in my life; ever since I have known with certainty that human potential in any arena far exceeds our normal, conscious bounds.

I’m proud that over 15,000 busy New Yorkers have learned to play guitar at NYC Guitar School in our beginners series classes. After 50 weeks absolute beginners can play barre chords, multiple strum patterns, pick individual notes, play songs by heart and more. We also have group classes for more advanced players, in which students grow together step-by-step into more advanced understandings and capacities.

For years I struggled with how to help these players advance, amid the hundreds of possible paths. Our approach has been to offer numerous elective classes, from Lead Guitar Basics, to Fingerpicking, to Singing And Playing and more, all aiming towards our Rock Band program, where students begin to put it all together. And of course we offered private lessons with top instructors.

But I craved the multiple-session per week, immersive feeling I got when I studied martial arts. So that’s where I looked for inspiration in how to develop a new approach to mastering guitar for advanced students.

I studied martial arts as an adult, after I had already dedicated my professional life to guitar and to guitar teaching. I had the incredible experience of being a beginner as a conscious learner, deeply interested in how to learn and how to teach.

After I got my black belt in an Indonesian martial art called Poekoelon, I spent years studying boxing and jiu jitsu. I especially loved studying jiu jitsu at the Renzo Gracie Academy, conveniently located across the street from NYC Guitar School in midtown Manhattan. The classes followed a simple but incredibly effective structure–a consistent warm-up, followed by the explanation and demonstration of a single specific skill (like the “bridge and roll”, the “scissors sweep” or the “triangle”), followed by guided practice in that skill, and finally the application of that skill in collaborative contests with other students.

Of course, the first time I learned any of these skills, I was clueless!

Of course, gradually, I began to understand some of the nuances!

And even though I was strictly a part-time hobbyist, after much deliberate and guided practice, at last I even experienced the awesome feeling of executing some moves by instinct.

The four laws of learning are explanation, demonstration, imitation and repetition. The goal is to create a correct habit that can be produced instinctively under great pressure.

Studying martial arts, and jiu jitsu in particular, helped me to see that effective classes for don’t have to go from A to Z. As long as the students have a solid base of knowledge, topics can be covered in any order. Each technique, understanding or approach informs and strengthens subsequent techniques, understandings and approaches. And over the time student will advance not only in specific skills, but in the overall art.

Of course I wanted to apply these concepts to teaching guitar!

I asked myself, “What if we took 50 essential advanced guitar skills, ranging from sweep picking, to unison bends, to instant transposing, to modes and intervals and hybrid picking and so on, and continuously cycled through them, in a class in which every student already had a foundation in all the basic chords, barre chords, pentatonic scales, and strum patterns?”

“And what if we held multiple sessions per week, so that students could take as many classes as they were able to or wanted to and could control their own rate of progress and improvement?”

It took multiple tries to get the structure and curriculum right. And I believe we will continue to adjust the class.

But we finally have a course for advanced guitar players which will gradually help them hear and see and understand and feel more and more of and about the art of guitar.

One skill at a time.

Building upon one skill at a time.

“Before I learned the art, a punch was just a punch, and a kick, just a kick.

Now that I understand the art, a punch is just a punch and a kick is just a kick.”

And that is what martial arts has to do with our Advanced Guitar Class Membership! 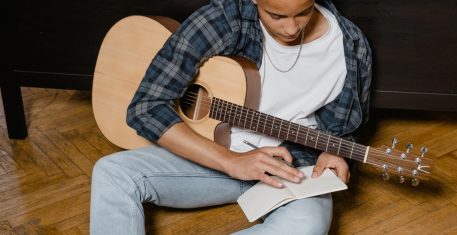