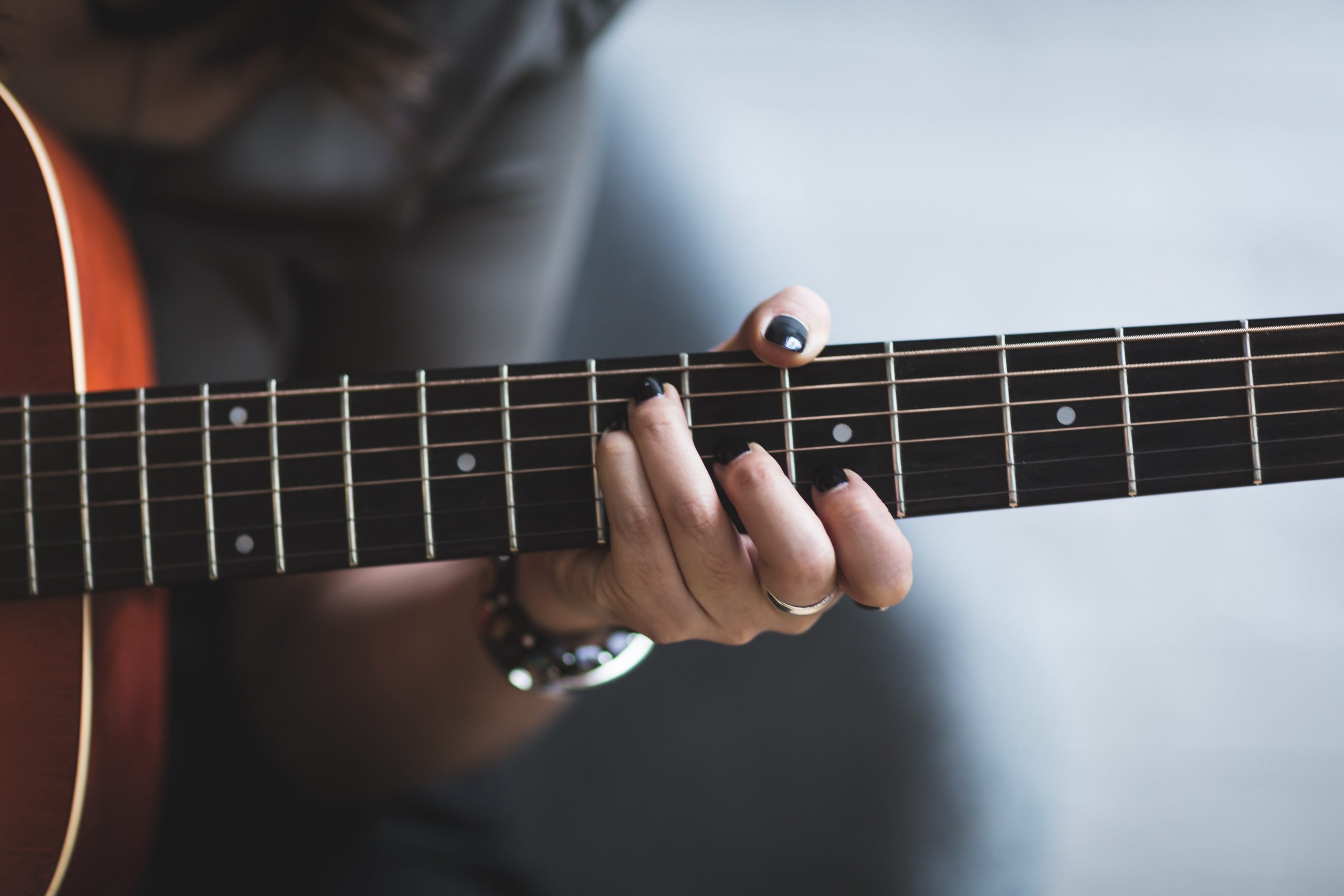 A lot of guitarists will either jam on a scale or play chord shapes they already know. Scales and chords are often taught as separate entities, and many guitarists never think to blend the two. However, this kind of thinking can be pretty limiting. Within each scale lies all of the chords in that key. If you learn how to find chords in a scale, It can be easy to incorporate them into otherwise scale-based playing, such as leads, solos, and riffs. In this piece, we’re going to go over how to form chords, how to find them in the scale shape, and how to invert them into new voicings.

We’re going to start by looking at the archetypical A-minor minor scale pattern, starting on the 5th fret. Although the concepts discussed in the piece are equally applicable to any key, they really are derived from this scale shape, so it’s important that you get it under your fingertips before continuing.

The A Minor Scale

A chord is, by its very definition, any combination of three or more notes. This means that there are quite a few different chords that can be formed by combining the notes in the above scale. However, most of those potential chords sound pretty dissonant and aren’t widely used in popular music, so we’re going to focus on finding the chords that you’re more likely to use in your playing.

Most common chord types, including major, minor, dominant, diminished, and augmented chords, are built on a series of stacked thirds (suspended chords are an exception to this rule). By following this pattern of thirds, it’s easy to build diatonic chord voicings straight out of your scale shapes that will sound great when thrown into your solos and riffs. Let’s look into how.

A third is a type of interval. In fact, it just might be the most important interval in all of tonal music. An interval is the distance in pitch between two notes. Intervals quantified based on how big or small that distance is. If you were to play the open 6th string and then play the 1st fret on the 6th string, then the distance between those notes would be a very small interval (known as a minor second). But, if you instead played the open 6th string followed by the highest fret you can reach on the 1st string, the distance between those notes would make a much larger interval.

There are several types of thirds, but all of them are found counting up three notes in the scale from your starting pitch. When counting thirds, it’s important to remember to count your pitching as one, or you will end up with the wrong interval.

For example, let’s say you’re starting pitch is a C. Then if you count C as one, D as two, you will arrive on E when you reach three. Therefore, you can conclude that E is the third of C.

Finding Thirds In The Scale Shape 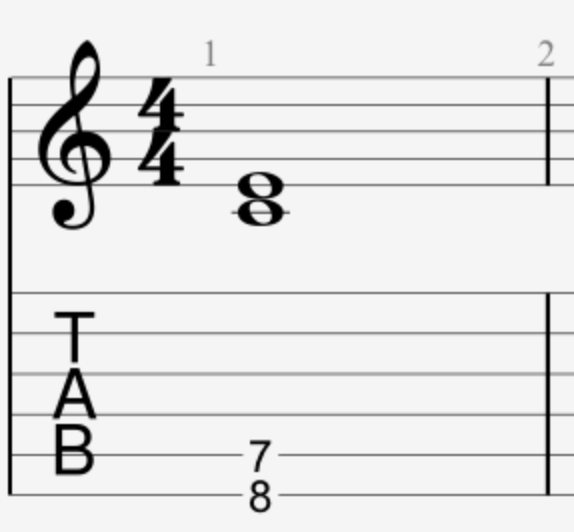 However, as guitarists, we have a bit of a shortcut to finding thirds (and other intervals) that many other instrumentalists do not. The third of any note can be found by using the following pattern.

If you’re wondering whether you’re looking for a major or minor third then there’s no need to worry, because luckily there’s a convenient trick for that as well. If you’re sticking to typical major and minor keys, then each note has only one kind of common third that will be inside the key. The major and minor scale shapes include all of the notes in the key, so it’s easy to check which notes are and aren’t inside the key.

This trick doesn’t work quite as smoothly when you’re pitch is on one of the scale’s lower frets, because it’ll likely take you out of the scale shape. If you do use this trick on a starting note that’s on one of the scale’s lower frets, then figure out the name of the note you arrived on and try and find that pitch elsewhere in the scale shape. If you can find that pitch within the scale, then you’re starting pitch has whichever type of third you just found. If it doesn’t, then it has the other type of third.

That first third is the foundation of most common types. But, as previously mentioned, a chord needs to contain at least three notes. The third note in the chord can be found by following the same process as the second note was found; take the new note and find its third. For example, in the key of A-minor, the third C-note an E. To find the third, count up three notes in the scale from E. E is one, F is two, and G is three, meaning that the third of E and the next note in the chord is a G. That gives us the total notes C, E, and G.

The notes C, E, and G are the bare minimum needed to spell a C major chord. This bare minimum form is called a triad, but any of those three notes can be repeated to form a more fleshed out version of the same chord. Or, if you’re looking to add a fourth unique pitch to the chord, simply find the third of the most recently added note and repeat the process all over again. For example, if we were to add a fourth note to a C major triad, then we would find the third of G in the key of A-minor. The third of G is B, which is natural in the key of A-minor, giving us the final notes C, E, G, and B. This spells a Cmaj7 chord.

This strategy can also be employed by using the previously discussed trick of finding thirds on the fretboard. Pick a starting pitch, and go up a string and down either one or two frets to find its third. Then find the third of that note, and you’ve built yourself a triad.

If we go up one string and down one fret the E, we arrive on the 6th fret of the 4th string, which is a G#. We know this is not the correct third, because that note is not in the scale shape we’re using. However, if we instead try and a minor third and go down two frets, we will arrive on the 5th fret of the 4th string, wish is a G-natural. This note is in the A-minor scale, so we know that it’s the correct third for the chord. That means that if we play the C on the 6th string, the E on the 5th string, and the G on the 4th string altogether, we’ll be playing a root position C major triad. 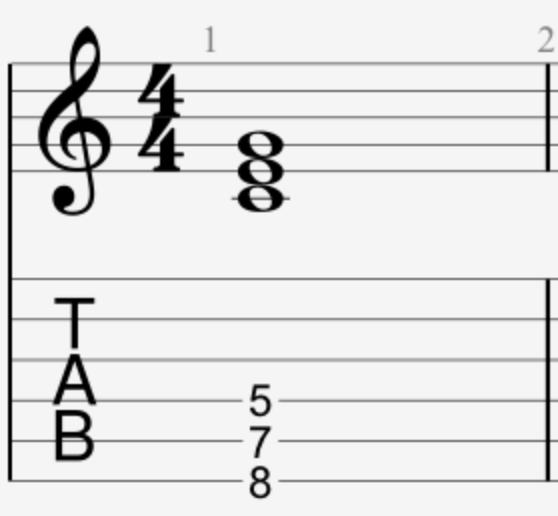 The first is to flesh out the triads you find so that they are no longer triads. You can do this either by finding additional thirds to stack on top of your triads (thus creating chord types such sevenths and ninths), by finding intervals other than thirds whose sound you like when played with the triad (thus creating chord types such as sixths and add ninths), by repeating the pitches in your triads, or by doing some combination of all of these. Below is an example of a chord formed by using the root position C major triad we previously looked at, but adding news garnered from two of those three options. 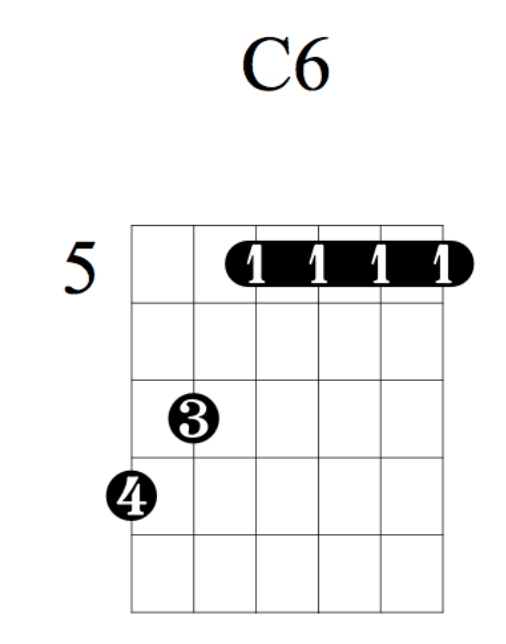 As you can see, the first three notes of the above chord the root position triad played exactly. Then, the already existing chord tones C and E were double by adding the 5th of the 3rd string and the 5th fret of the 2nd string to the chord, respectively. Finally, an A note was added from outside the chord on the 5th fret of the 1st string. This gives us the total pitches C, E, G, C, E, and A, and the unique pitches C, E, G, and A, which spell a C6 chord.

The other option is to keep only the notes that were already in the triad, but to change their location and/order on the fretboard. If you use this strategy, you will still have a triad but instead of having a root position triad, you will end up something called an inversion. An inversion is simply the notes in a chord played out of order.

Take the notes in you’re triad and find them elsewhere in your scale shape. To continue with the root position C major triad we’ve been using an example, I can take the C note we were playing on the 6th string and move it to the 5th fret of the 3rd string, move the E from the 5th string to the 5th fret of the 2nd string and leave G where it is on the 4th string. This leaves me with the total notes, from bottom to top, of G, C, E. Even those these notes are no longer in root position, they still spell a perfectly valid C major triad. 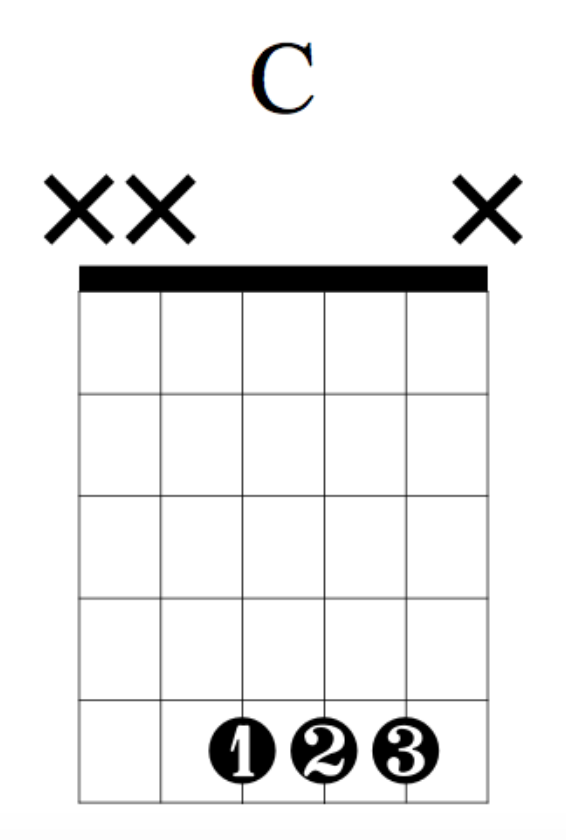