While learning new chords can often be daunting, even the trickiest chord shapes can feel not so scary when you’re able to relate them to shapes you’re already comfortable with. Any chord shape can be mastered with enough practice and elbow grease, but you might be surprised to learn just how many chord shapes are out there where you’ve already put in the bulk of the effort without even knowing it. In this article, we’re going to go over some chords that you may not know but are very similar to two chords that you probably do: F and Dm.

Chords Based On The Open F

We’re going to start by learning some chords based on the open F-chord shape. This is not the 1st fret barre chord F that some players learn early on, but instead the version where you put your ring finger on the 3rd fret of the 4th string, your middle finger on the 2nd fret of the 3rd string, and collapse your index finger of the 1st frets of both the 1st and 2nd strings. You then strum the top four strings, skipping over the 5th and 6th strings entirely.

A perk of this F-chord shape is that it is entirely movable. As it contains no open strings, you can slide this shape up to any fret and it’ll still be a major chord. Exactly which major chord it is will change based on where you place it, but it will always retain its quality as a chord, and the same is also true for all the chords we’re about to learn based on it.

To play an Fadd9 chord, start by making the open F chord shape described above. Then add your pinky to the 3rd fret of the 1st string. You can choose to either leave your index finger collapsed, or you can straighten it out and have it touch only the 2nd string. It makes no difference to the sound of this chord, so it’s really about whichever is more comfortable for you. The Fadd9 chord will work almost everywhere that your ordinary F chord will work, and its more somber sound makes it an interesting choice as a substitute. 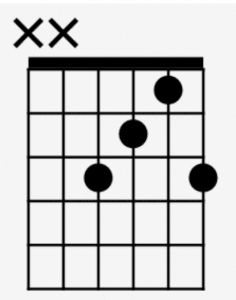 Playing this F6 shape is going to be a lot like playing the above Fadd9 chord. You’re again going to just add your pinky to an open F-chord, but this time add it to the 3rd fret of the 2nd instead of to the 3rd fret of the 1st string. This chord will again work just about anywhere that an ordinary F-chord would work, but it has a nice touch of melancholy that the plain old F-chord lacks. 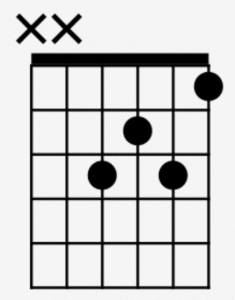 Although slightly more of a stretch than the other chords discussed so far, this F7 shape has a great, crisp sound to it. To play this F7, start by playing an F6 chord exactly as described above. Then slide your pinky finger up one fret, from the 3rd fret of the 2nd string to the 4th fret of the 2nd string. That one fret is all the difference there is between an F6 and an F7 chord, although it makes a world of difference in terms of harmony. An F7 chord will work about one in every three times that you see an ordinary F-chord written, so I’d avoid using it as a substitution if you don’t have too much theory knowledge. 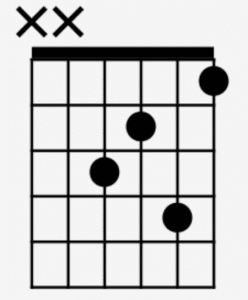 Chords Based On The Open Dm

Next, we’re going to learn some chords based on the open D-minor chord (commonly abbreviated as Dm). We’re going to use the common open Dm as our frame of reference. To make this chord, place your middle finger on the 2nd fret of the 3rd string, your ring finger on the 3rd fret of the 2nd string, and your index finger on the 1st fret of the 1st string. Then strum the top four strings, allowing the 4th string to ring out open, and skipping over the 5th and 6th strings entirely.

This Dm chord isn’t quite as perfectly movable as the above F-chord because it involves the open 4th string. However, if you remove the 4th string from the chord entirely, then the remaining three notes of the Dm chord are completely movable and can be placed anywhere on the fretboard. This is also true for the chords we’re about to learn based on this Dm shape, so feel free to experiment with moving these shapes and down the neck.

To play a D-suspended-fourth chord (or Dsus4, for short), play the Dm chord shape as described above. Then add your pinky finger to the 3rd fret of the 1st string. That’s all there to it! You can choose to either leave down the middle finger already on the 1st string or lift it off the fretboard. It makes no difference to the sound of this chord, although it is easier to switch back and forth between a Dus4 and a Dm chord if you leave the finger down. The Dsus4 will work just everywhere your Dm chords will, and their ambiguous sound can make them a very interesting choice for a substitution. 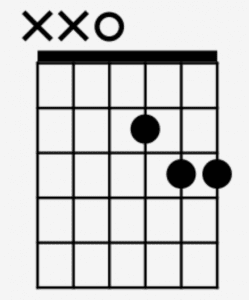 In order to play this D-minor 7 chord (or Dm7), start with the open Dm shape. Then lift your ring finger off the guitar and collapse your index finger so that it covers the 1st frets on both the 1st and 2nd strings, similar to the way you would play an F chord. In fact, another way to arrive at the Dm7 shape is by starting with the F chord described earlier, then lifting your ring finger off the guitar and letting the 4th string ring out open. A Dm7 will work pretty much anywhere that you see an ordinary Dm written, and substituting it can be a great way to subtly class-up a chord progression. 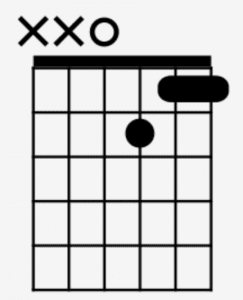 Even though this is the only chord on this list where we’re going to change the root note, it’s surprisingly easy to change a Dm chord into a Bb. All you have to do is take the above Dm shape and slide your middle finger from the 2nd fret of the 3rd string to the 3rd fret of the 3rd string. That one fret makes the difference between a Dm chord and Bb, although some would refer to this Bb voicing as Bb/D.

Alternatively, you could refinger this voicing with your ring finger on the 3rd fret of the 3rd string, your pinky on the 3rd fret of the 2nd string, and your index finger on the 1st fret of the 1st string. These are some frets as described above, but you may finger it more comfortable to instead use these fingers. As it is a different root note entirely, substituting a Bb for a Dm typically won’t work out super well, but it’s still a great chord shape to know. 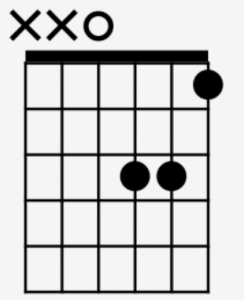