Do You Have A Practice Routine? Get One Now!

Home News Do You Have A Practice Routine? Get One Now!

Do You Have A Practice Routine? Get One Now!

Removing Willpower Gives Space to What Matters Most 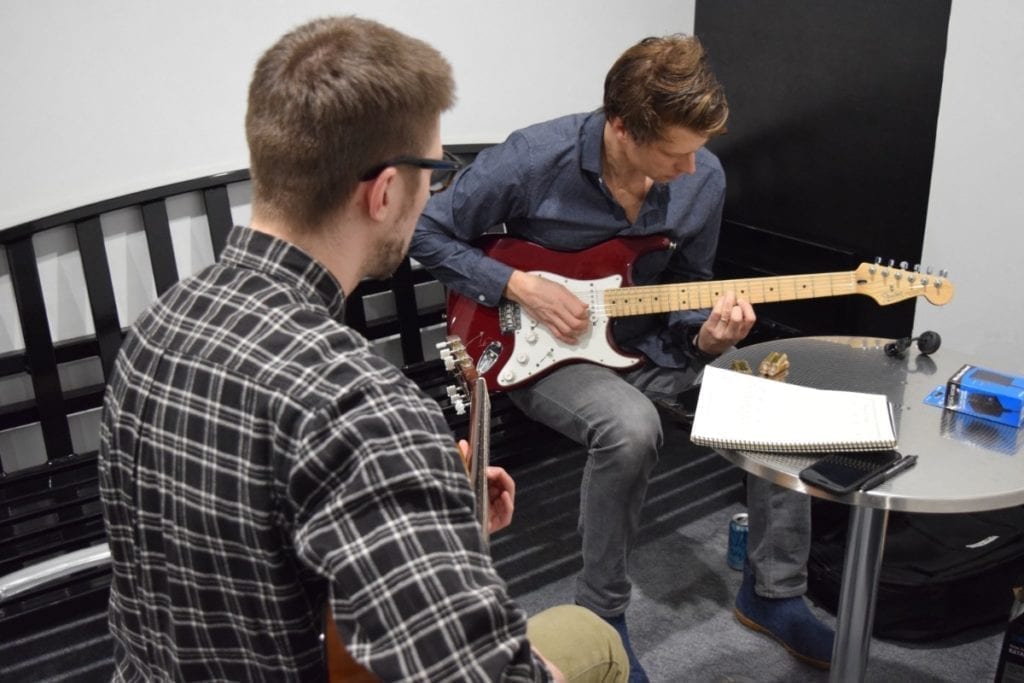 If I come in extra early for work at NYC Guitar School, I know what to expect when I open the door: a weird, unearthly, ethereal sound:

“Meeeeeeeeeiiiii (with a rising pitch)”

“Maaaaaaaahhh (with a falling pitch)”

It’s my long time partner, and the Director of Camps and Rock Bands, Jen, singing her vocal warm up and practice routine. And then she practices guitar!

I’m so impressed and inspired by her practice consistency, and after years as a singer and rhythm guitarist, she’s been taking solos in her most recent shows. That’s awesome progress!

Do you have a routine for practicing? If not, I have brutal news for you:

No routine? Sorry, minimal or no progress.

Why? Because without a routine you’ll have to rely on temporary willpower and motivation to practice, and other priorities, including other people’s issues and random life and work events, will always hinder you from practicing.

Luckily, it’s pretty easy to put together an effective routine that will work for YOU to help you learn what you want to learn, do what you want to do and be who want to be. But before you pick up that guitar, make sure that your routine has two simple elements which will make it effective.

TWO ELEMENTS OF A GREAT ROUTINE

Routine can get a bad rap. The word “routine” can make people feel constrained or bored. But like an actor memorizing a script in order to creatively expressing the words, or a guitarist memorizing a chord progression so they can jump on top of an amplifier while playing, a practice routine actually sets us free to concentrate our drive and willpower on creating and improving.

For example, instead of burning willpower making yourself practice, you get to put that willpower and focus to work bending a string to the correct pitch, or mastering a new strum pattern.

For your routine to be effective, you need two essential elements to remove willpower to ensure that what matters most to you is given space in your life.

Last year, one of the NYC Guitar School book group books was Atomic Habits by James Clear, where we learned the concept of an “anchor” – using some existing feature in our life to trigger a new desired routine.

Jen practices in the morning at NYC Guitar School, before she starts work. The place and time is “at work, before work”, but the trigger is walking into the school lounge and seeing all the guitars hanging on the wall.

I’m in my second year of consistent Spanish practice. My trigger is exiting Grand Central Station. Oh, and I’m writing this blog on my morning train ride. Over the years I’ve written six books and over 100 articles mostly on the train! Not bad, and I’ve anchored that habit onto stepping onto the train.

The great thing about an anchor is that it automatically gives you flexibility. Whether I get on the train at 7am or 10am, or whether I leave Grand Central on foot or on subway, I still get to experience my practice trigger.

So, don’t depend on willpower or memory! Instead, create an anchor for your practice! Coffee? Coming home? After you feed the cat?

What will your anchor be for your practice?

The next place to save willpower and maximize actual growth inducing practice is to standardize what you do. Avoid re-inventing this each time.

Jen’s routine starts with playing a warm up recording of NYC Guitar School vocal teacher Daisy Press. She doesn’t burn energy deciding what her workout is – she just does the workout her teacher gave her!

My writing routine starts with putting my headphones on and hitting play on “The Trooper” by Iron Maiden. Then, in rhythm with the music, I open my laptop and start typing. And my Spanish routine is made up by experts in teaching Spanish – I just follow my lessons, but it starts with the same little ritual of putting on my headphones.

The best routine, at least when you begin, is a routine that somebody else made up and uses effectively. That’s one reason taking classes or lessons can be so effective – not only do you get a primary routine of coming to class, but you usually get expert practice tips to or even tailored workouts to do on your own.

What will your routine be?

No matter how motivated you are, you’ll slip on your routine from time to time. That’s OK. If you miss your trigger, or have a lackluster practice session, don’t beat yourself up! Just start again the very next time.

And, be sure to change your routine up if it starts to feel stale!

The purpose of a routine is not self-control. It’s self empowerment! So if your routine starts to feel more like a rut, change your trigger or routine.

Wow, I’m so excited about routines. Aren’t you? They are so fun, so powerful, and really, relatively easy as long as you have a good anchor and a good routine to allow you to put your creativity and willpower where it belongs – on growing into more of the person you want to be!

My train is pulling into Grand Central now…so soon I’ll be practicing along with my Spanish lessons as I walk to work, and I know that when I walk into the guitar school lounge I’ll hear:

Take A Lesson!  Take A Class!