For those who don’t know, an arpeggio is the pitches that make up a chord played one at a time as individual notes. Essentially, arpeggios take harmonies and cut them up into melodies. If you’re interested in the more technical/theory-oriented side of that stuff, you can learn more about it here.

While arpeggios are sometimes used as warm-ups or theory exercises, guitars players tend to primarily use them as licks when soloing. Very little sounds quite as cool as an electric guitar gliding through a well-chosen arpeggio at the climax of a solo. Arpeggios can make your soloing sound tuneful, elegant, and like you’ve taken the time to develop much more intricate skills than you really have, and are a major element in the playing of many important guitarists, including Jimi Hendrix, Eric Johnson, Eddie Hazel, Frank Zappa, and many more. Who doesn’t want all that?

Luckily, you probably already know dozens of arpeggios, even if you didn’t know that you know them. How about that? Well, here’s the secret: any chord shape you know is secretly an arpeggio in hiding. Let me explain.

Arpeggios are just the notes that make up a chord played individually. If you play guitar, I’m willing to bet the naming rights of my first child that know at least some chords. Therefore, if you play the notes in the chords shapes that already know one at a time then you are playing a perfectly valid arpeggio. The concept itself really is that simple, although there are few necessary caveats when putting that concept into actual practice.

The first of those caveats is that this concept is not quite as simple just grabbing your favorite chord shape and dragging your pick across the strings one at a time. That’s because when you do that the strings are all still going to ring out after you’re done plucking them. When the notes still ring out after you’re done with them then they are going to harmonize with all of the notes you play after them, thus creating that full chord that we were trying to break up in the first place. The process of playing a chord like that is called arpeggiating, and while that can also sound great when used well, it’s not what we’re trying to do right now.

In order to get a proper arpeggio out of your beloved chord shapes, you’re going to need to play them so that only one note rings out at any given time. This means that while you can still totally use the chord shapes you already know to find arpeggio patterns, you’re going to have to finger those shapes the way would a single-note line. As a result, you are not going to simply be plopping down your chord shape and picking the notes from there. Instead, you are going to assemble the shape piecemeal, fretting the notes that would be in the chord shape you reach them before moving on to the next note.

For example, play your basic A-major barre chord that starts on the 5th fret of the 6th string. If you don’t know that chord off the top of your head, it’s charted out here: 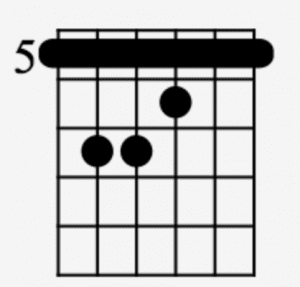 Now try playing that chord shape as an arpeggio in nice, even single notes. Make sure that each note is cut short by the time you move on to the next note. You can achieve this releasing lifting your finger off the fretboard as you finish playing each note, just as you usually would when playing single-note lines. 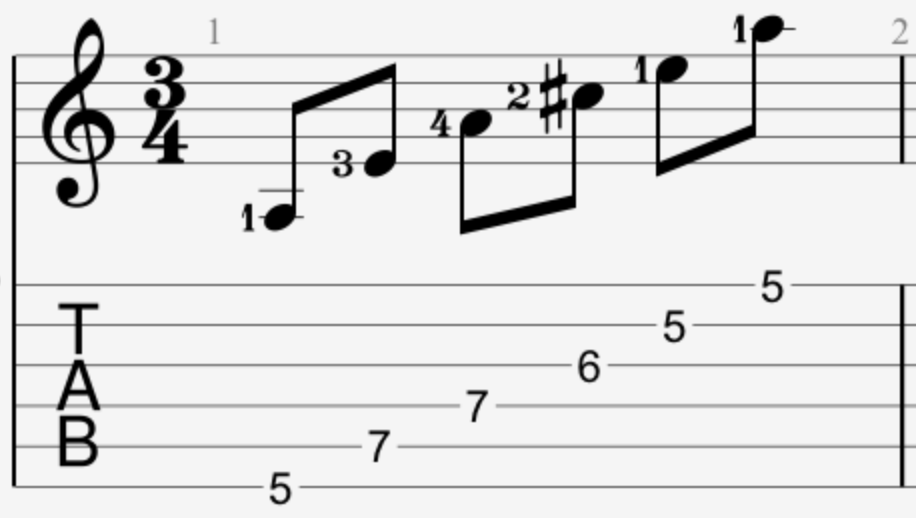 NOTE: Do you see those little numbers next to each of the notes on the notation section? Those numbers refer to which finger you use to fret each note, with 1 meaning your index finger, and 4 meaning your pinky finger.

Try practicing that A-major arpeggio until you can play it smoothly as a single-note line. Just like the barre chord we’re taking it from, that arpeggio is a 100% movable shape, so you can plop that patten down on any fret on the 6th string and take it from there. This means that on most guitars, that one pattern will give you about nineteen or twenty different major-arpeggios that you’ll be able to reach.

It is significantly more difficult to apply this concept to open chords or to any other chord that uses an open string. The reason for that is that unless you make the effort to stop an open string from ringing out, it’s going to keep on ringing out on its own even after you’ve moved on to the next note. This is certainly not an insurmountable obstacle, but does make it much harder to play your open chord shapes as smooth arpeggio lines.

If you’re going to play your open chord shapes as arpeggios, then just make sure to mute the strings with the palm of your picking hand as you move onto the next note. This motion can be tricky and can greatly reduce your speed and fluidity, but it’s a necessary step if you’re trying to achieve the crisp, lyrical effect of an arpeggio from an open chord shape.

So with all the being said, you should be all ready to go forth and throw some arpeggios into your solos. Just find some a chord shape that you know and love, play its notes one at a time, and you’re already doing it!