Chord of the Week: The Power Chord

Chord of the Week: The Power Chord

Get Started Now. View Upcoming Classes
People have based entire careers off of this chord! Greenday always jumps to mind but pretty much all punk is based around the power chord (named for it’s thick, edgy rock and roll sound). To play it you must only hit the strings that your holding (no open strings). 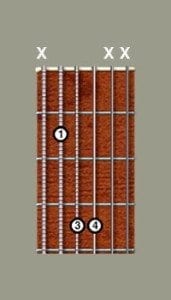 The amazing thing about this chord is that it is both moveable and tonaly ambiguous! This is a B power chord or a B5 but if you move it up one fret, it’s a C chord. Move it up one more and you have a C# and then a D. You can also move the chord up one string so that your first finger is on the sixth string. When your finger is on the second fret, you have an F#. The third fret is G then G# and so on.

Since there is no third in this chord, it is neither major or minor. You could substitute this chord for B Major or B minor and it would work for both.

The takeaway here is that you can substitute any chord, major or minor, with a power chord. That means you can now play all twelve major and minor chords and you only had to learn one!

Click Here to see how you can use this chord to play?Money by Pink Floyd!