10 Reasons Why Your Child Should Take Music Lessons

Get Started Now. Music is everywhere. It’s in our homes, streets, offices, technological devices, and much more all across the globe. For many of us, music is crucial–so it’s no surprise that parents are making great efforts to make music a part of their children’s lives. Parents enroll their children in programs ranging from mommy/daddy-and-me music classes to professional lessons, including classes that specialize in vocal performance and/or instrumental training. Although most parents know that music is both a crucial and beneficial art, a great deal are unaware of the many specific life-long benefits that learning an instrument can provide for a child. To list just a few, NYC Guitar School has chosen the TOP 10 benefits of music education for kids: Music Lessons Improve Math Skills: According to several different studies, it has been proven that math skills and instrumental/musical training are parallel. Shocking, right? In fact, the ideology behind this is
Continue Reading ?

7 New Years Resolutions for Every Guitarist

Get Started Now. It’s January and our phones are ringing off the hook! People all over NYC are making the resolution to play guitar in 2016. Many of them will be successful but some of them will lose momentum as the year moves on and life invariably happens. Not you, though! You will be successful because you will have clear, achievable and definitive goals. Here are a few suggestions to help keep you on track! 1. I will practice every day (even if it’s just a few minutes). Studies have shown that the amount of time you spend practicing in any given week is far less important than how often you practice. If you can get in just 15 – 20 minutes a day you’ll be better off than someone who practices for three hours twice a week even though you’ve spent less than half the time! 2. Leave my guitar out of the case at home. This one is really easy. You just get a guitar stand for the wall or your floor and when you get home from guitar lessons, you take your guita
Continue Reading ?

Get Started Now. The internet is a magical place and if you know what you’re looking for it can be the most powerful tool in the guitar student’s arsenal! Check out these 15 links and kick your playing into high gear! 2. Chord Dictionary There are lots of places to learn new chords. The best way is to learn new songs but if you’re just looking to browse some new chords try our chord dictionary. It has the unique function of being able to click view beginner versions of chords. Just click “beg” and it will show you easy versions of any chord! 4. Lick of the Month We do a lick of the month every single month. Check out this youtube playlist and learn all 78! 6. Strum Library How many strumming patterns are there? Infinite! Infinite strumming patterns! But don’t worry. You can check out some of the really common ones in our strum library. They’ll loop over and over again until you get it. 7. Chord Chart Websites The best way to find the chords to
Continue Reading ?

Get Started Now. Steven has been learning guitar at NYCGS four years now but he’s been playing in rock bands since after the first six months!
Continue Reading ?

How to Play Rhiannon by Fleetwood Mac

Get Started Now. You may have seen the 2009 Axis of Awesome video demonstrating that thousands of songs use the same chord progression. This particular progression, the most popular of them all, is called the I – V – vi – IV (one, five, six, four). In the key of G that’s G, D, Em and C. So without further ado, here are 39 songs in chronological order from 1969 – 2013, that you can play using those chords in that order. Many of them are not in the key of G originally but they can be! Click on any title for a link to a chart from somewhere on the interwebs! *hint: Can’t play all of the chords? Try messing with the “transpose” button until the first chord is G! –Oh Darling Beatles, The 1969 –Let it Be Beatles, The 1970 –Country Roads Denver, John 1971 –No Woman No Cry Marley, Bob 1974 –Beast of Burden Rolling Stones, The 1978 –So Lonely Police, The 1978 –Don’t Stop Believing Journey 1981 –
Continue Reading ?

Get Started Now. Daniel Coyle has spent time in the world’s most talented places. A Moscow tennis club which had, over three years, produced more top 20 women players than the entire united states, a ski academy in Vermont which had produced over 50 olympic skiers in the past 40 years, a Dallas vocal studio which has produced millions of dollars in pop-music talent. What do these places have in common? More than you might think! The biggest take away is that talent is the result of hard work, study and general determination – not something that you’re simply born with or without. If you’re like me, that’s extremely comforting! We can change our destiny! Here are some random tips from the book, which is organized into short, digestible chapters. #1 “Stare at who you want to become.” Coyle points out that observation makes up a huge percent of time spent at these talent hotbeds. For a beginning guitarist that can mean going out to shows but it do
Continue Reading ?

Chord of the Week: Am7

Get Started Now. How about a nice simple chord of the week? Am7 is a two finger chord that can be played in place of a regular Am anytime you feel like adding a little James Taylor style flavor to your chord progression (see Fire and Rain). You can also use this one to start off Rocky Racoon by the Beatles. Have fun!
Continue Reading ?
« First‹ Previous9101112131415Next ›

3 Classic Songs with Just 2 Chords by Chuck Berry, Sly & The Family Stone, and The Staple Singers
No Responses.

3 Classic Songs with Just 2 Chords by Chuck Berry, Sly & The Family Stone, and The Staple Singers

Yes it’s possible! Join your fellow musicians to jam virtually on a variety of simple songs with the easy-to-use app “Jamtaba”. Your jam coach... 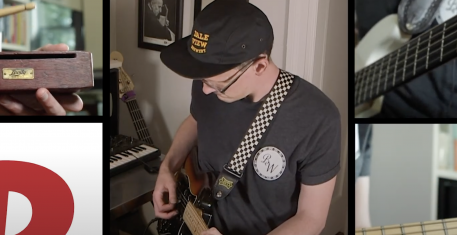 3 Classic Songs with Just 2 Chords by Chuck Berry, Sly & The Family Stone, and The Staple Singers

What if I told you that in a matter of about 15 minutes you could be playing songs by three super influential artists/bands and all you need is two chords?...