Applying Your Guitar Knowledge To Ukulele

Applying Your Guitar Knowledge To Ukulele 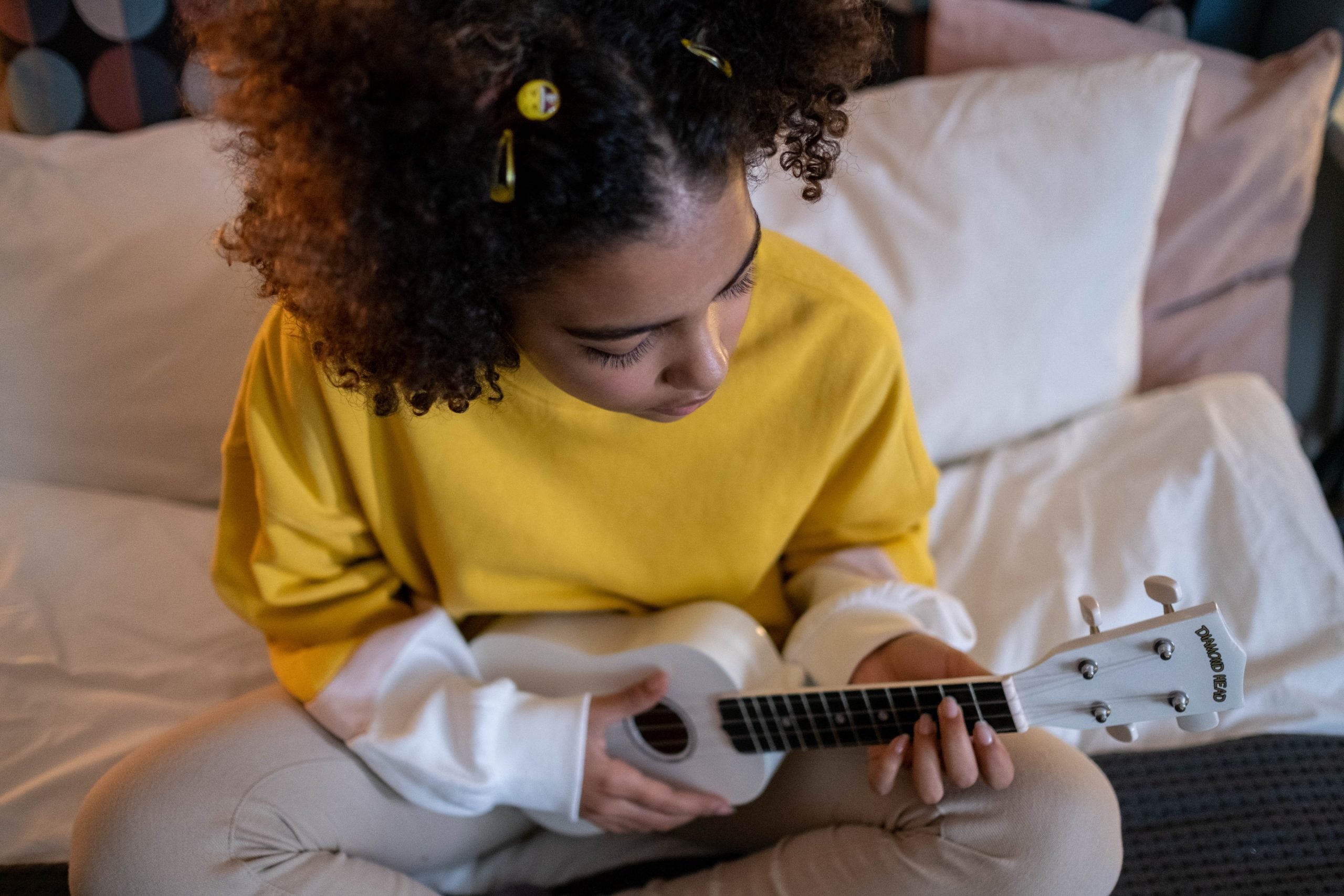 Ukuleles are quite similar to guitars. One of the perks of playing fretted instruments is the relative ease with which new instruments in the family can be picked up, and going from guitar to ukulele is no exception. It might not be quite as direct a one-to-one translation as going from guitar to bass, but the broad strokes are still pretty similar. Notes are fretted the way, each fret represents the same interval, and the two instrument’s standard tunings are more similar than they may at first appear. However, some things to watch out for are the ukulele’s significantly smaller fret size, the fact that it has fewer strings, and the one string on the ukulele that’s tuned quite differently from anything we have on guitar.

The standard tuning for a ukulele is G-C-E-A, when looking at the strings from left to right. However, while the strings on a guitar are tuned higher in pitch than the string preceding it, this is not entirely the case with a ukulele. While the E and A strings of a ukulele do follow this pattern, the  G string is actually tuned to a higher pitch than the C string. I wouldn’t fret too much about tuning the G string to the right octave; ukulele strings are much more brittle with less mailable tunings than guitar strings. If you strung your ukulele correctly, then the G-string should find the right octave pretty naturally when you start tuning.

Once you’re in tune, let’s take a moment to analyze standard ukulele tuning. Even the G-string is tuned higher than the C-string, the distance between those two strings can still function as a perfect fourth, which is the same interval as most strings are tuned apart on the guitar. The distance between the C string and the E string is a major third, and the distance between the E string and the A string is another perfect fourth. If music theory isn’t really your thing or if you didn’t otherwise pick up on the significance of those intervals, then please allow me to spell it out for you: those are the same exact intervals as the top four strings of a guitar.

This means that any shapes and patterns you know on the guitar that don’t involve the 6th and 5th strings can be directly applied to a ukulele. It’s true that it’ll be in a different key than it’ll be in when playing it on a guitar, but any intervals and chord qualities will remain the same. If you wish to keep the pitch the same, you can accommodate for the differences in tuning by either raising everything by seven frets or by lowering everything by five frets. While employing some combination of these two methods in which you raise some notes by seven frets and lower other notes by five frets can technically work, if you’re not careful it can result in disjointed melodies that awkwardly hop between octaves, so I’d recommend sticking to just one or the other if you can.

If you’re looking to find notes along the ukulele neck and simply transpose the notes you know on guitar, then don’t worry! As I mentioned earlier, each fret on a ukulele represents one half-step, just one fret on the guitar does. This means that you can count up the fretboard in half-steps exactly as you would on a guitar, except that your starting pitches are G, C, E, and A, as opposed to E, A, D, G, B, and E.

One alternate option is to tune your ukulele to D-G-B-E, just as the top four strings of a guitar are typically tuned. This will allow any guitar shapes, patterns, or songs you know to be applied directly onto a ukulele without any need to transpose the frets. It’s true that the D string will be tuned to a higher pitch than the G string, which it would not typically be on a guitar, but it would still be a D-note and will harmonize and blend with other notes just as any D-note would.

If you try out this strategy, I highly recommend tuning down to D-G-B-E instead of tuning up. Ukulele strings are fragile and have a tendency to snap when tuned up even small margins past their standard tuning, and the difference in tuning required by this trick is substantial. However, tuning down this much will significantly lower the pitch of the ukulele. While that much was probably obvious, what’s less obvious is the impact this will have on the timbre of the instrument.

When tuned down this much, a ukulele will lose the bright, snappy tone that is the instrument’s trademark. What you’ll get instead is a much more somber, mid-range heavy sound that, while not without its merits, is likely not what you were going for when you decided to pick up your ukulele today. So if you’re going for a classic chipper ukulele sound, then tuning down probably isn’t the way to go.

As I mentioned earlier, any shapes you know that only use the top four strings of the guitar can be applied to a ukulele. However some guitar chord shapes will work particularly well when played on a ukulele, and it takes surprisingly few of them to navigate many common chord progressions. One particularly useful chord shape is the open F-chord shape from the guitar. You can see it charted out for a ukulele below. 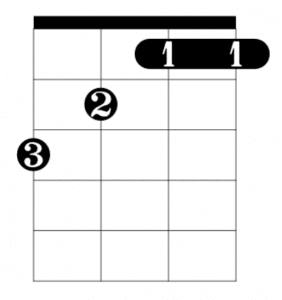 When applied to a ukulele, it utilizes all four strings to form a nice, versatile, and almost root-position major chord shape. When played in first position it forms a Bb-chord, but the handiest thing about this shape is the fact that it’s entirely movable. As there are no open strings in the above shape, you can slide it anywhere you want along the fretboard. The root note occurs twice in this chord shape; once on the G-string and once on the A-string. That means that whatever note you are playing on those two strings will be the name of the chord. As the root note repeats, you can feel free to drop one of the two root-notes if you’re looking for a slightly smaller sounding chord.

For example, when you play that shape along the first three frets of a ukulele as written above, it forms a Bb-chord, as previously stated. But if you slide that entire shape up one fret, then you’re suddenly playing a B-chord. If you slide it up another fret you’d be playing a C-chord, if you slide it up another fret then you’d be playing a Db-chord, and so on. As the fretboard of a ukulele spans a little over an octave on each string, this shape can get you through every simple major chord you might come across. Also, don’t forget that these shapes can be slid down to open position, where the open strings can be utilized.

If you’re curious, the answer is YES, this same exact thing can be done with the open F-chord shape on a guitar.

It’s true that just sliding the same shape up and down the fretboard might not make for the most interesting changes, but it’s enough to get you started! 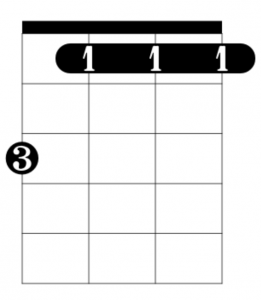 Take the common chord progression below, and see if you can figure it out on a ukulele, using just the chord shapes above.

If you figured it out correctly, then you should be playing something like this:

So while it’s true that sticking to just these chord shapes can get you through most simple progressions, doing so would involve lots of jumping around the fretboard and would have next to no variation. So while these movable shapes certainly have their merit, the next step is to learn some alternative voicings. Luckily, these voicings can be borrowed from your guitar knowledge as well.

The movable triad shapes that are often played along the top three strings of the guitar can be applied directly to the top three strings of a ukulele. While you’ll have to adjust the frets as previously discussed in order to get to play the same chord, the quality of the chord will remain the same. Learning to play these triads on the ukulele will allow you to save time moving around the fretboard, will give you chord voicing some great variation, and can get you surprisingly far on the instrument.

Just like the chord shapes, we went over, these triads are all entirely movable. If you are unfamiliar with these shapes, they are discussed in depth in the article link above, and some of the most pertinent shapes are charted out for ukulele below. The root notes for each chord shape are highlighted. 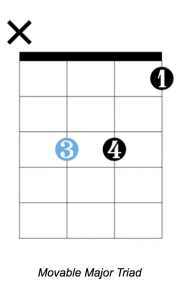 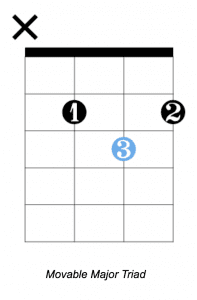 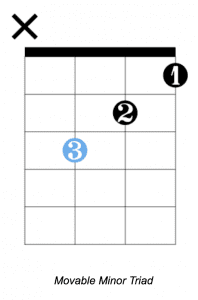 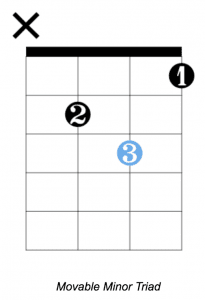 If you are interested in further exploring this topic, I highly recommend checking out the two videos below, which go further in-depth and fill in some of the gaps.