Emerging in 1950s Jamaica as an early form of reggae and later gaining new life when it collided with the British punk scene two decades later, ska has remained an enduring form of music with a devoted following since its inception. In its original form, ska merged the syncopated rhythms of Caribbean music with the high energy and instrumentation of American R&B. A later influx of Jamaican immigrants brought ska and its accompanying rudeboy subculture to England, where it cohabited with England’s then fledgling punk scene.

The two largely working class scenes put on shows at many of the same venues, established shared fandoms, and soon began creating musicians influenced in equal parts by both scenes, with notable early examples including such bands as Madness and The Specials. This form of punk and new wave influenced ska spread globally over the 1980s, eventually reaching a commercial zenith in the mid-90s with bands like Sublime, No Doubt, and Rancid before returning to being a largely underground form of music in the 21st century. Although today few ska bands are selling out arenas or dropping gold albums, the scene remains globally present with a cult-like level of dedication among its adherents.

Guitar has played a major role in ska since its inception, with some even theorizing that the word ska is itself an onomatopoeia for the sound of a staccato guitar strum. While ska guitar tends not to be particularly complicated or difficult, the guitar sound associated with the genre is highly specific, and thus an easy mark to miss. In this piece, we’re going to go over several simple essentials needed to create the sounds we imagine when we think of ska guitar.

The Rule Of Threes

Although a variety of chord voicings have been used by guitarists throughout the history of ska, the voicings most commonly used in the genre are triads played along the top three strings (as in the 1st, 2nd, and 3rd strings). For those who may be unaware, triads are little chords consisting of only three notes, hence their name. Triads have the absolute minimum amount of notes needed to play proper major or minor chords, and their lack of fat is exactly what gives them the light, punchy sound that has made them the standard voicings in ska guitar. While triads can be played along any three strings of the guitar, as previously mentioned, in ska we’re going to be playing them primarily along the top three strings.

When playing triads on the top three strings of the guitar, we are going to have one major and one minor chord shape with a root note along each string, making for a total of six unique movable chord shapes. It is important to remember that the root note will not necessarily be the lowest note in pitch, as it is in many of the most common barre chord shapes. These shapes are all movable, so you can identify which chord you are playing by finding the name of each root note. The root note is shown in blue on the charts below. 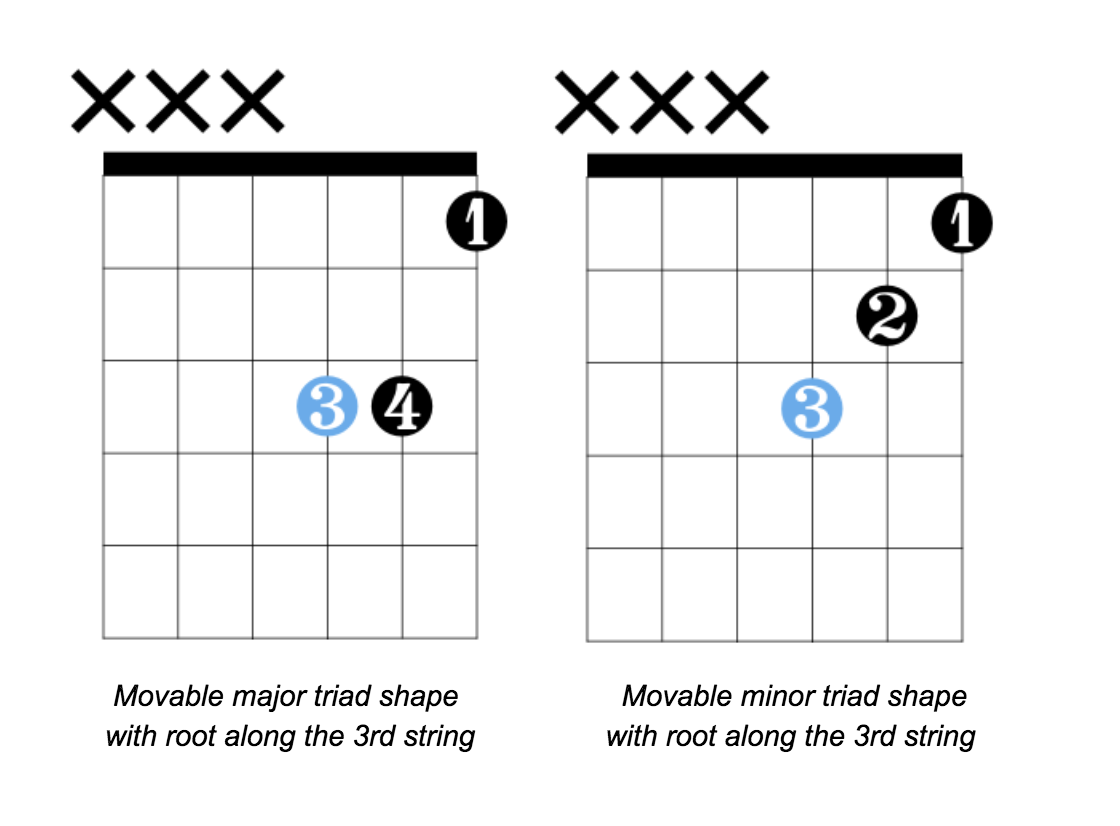 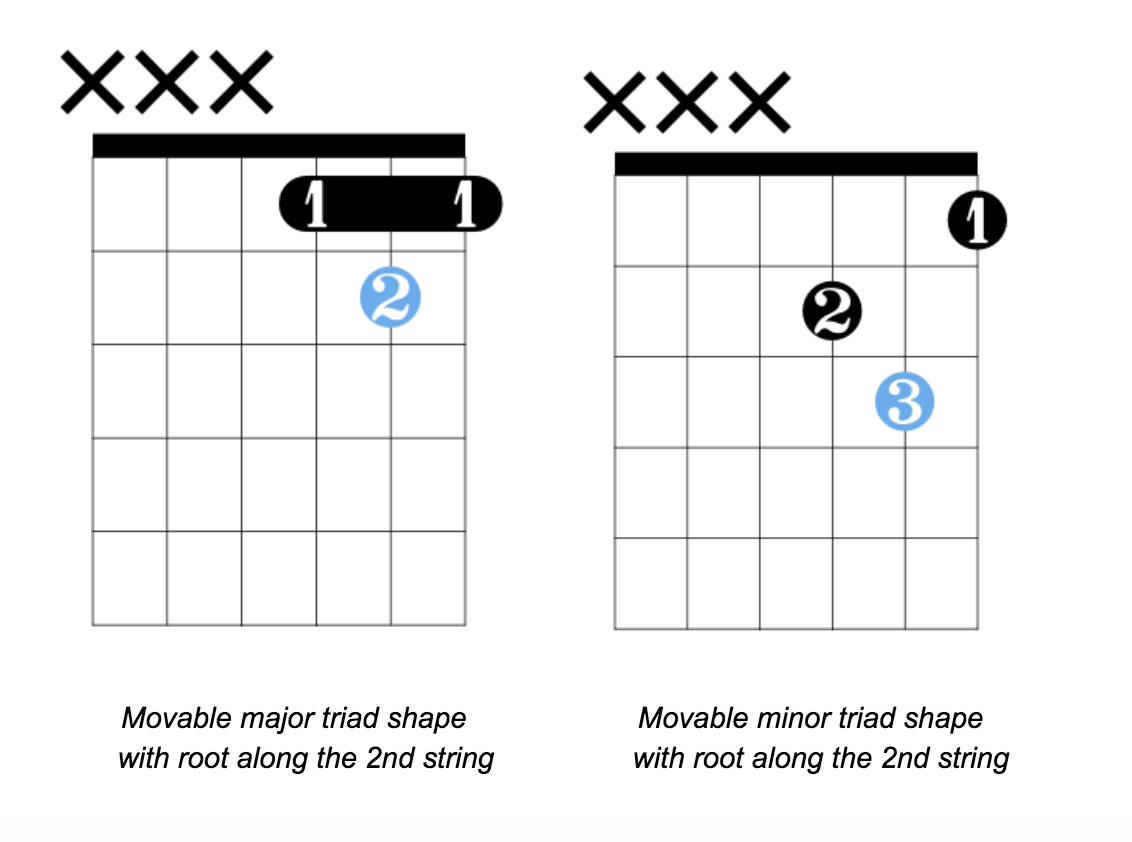 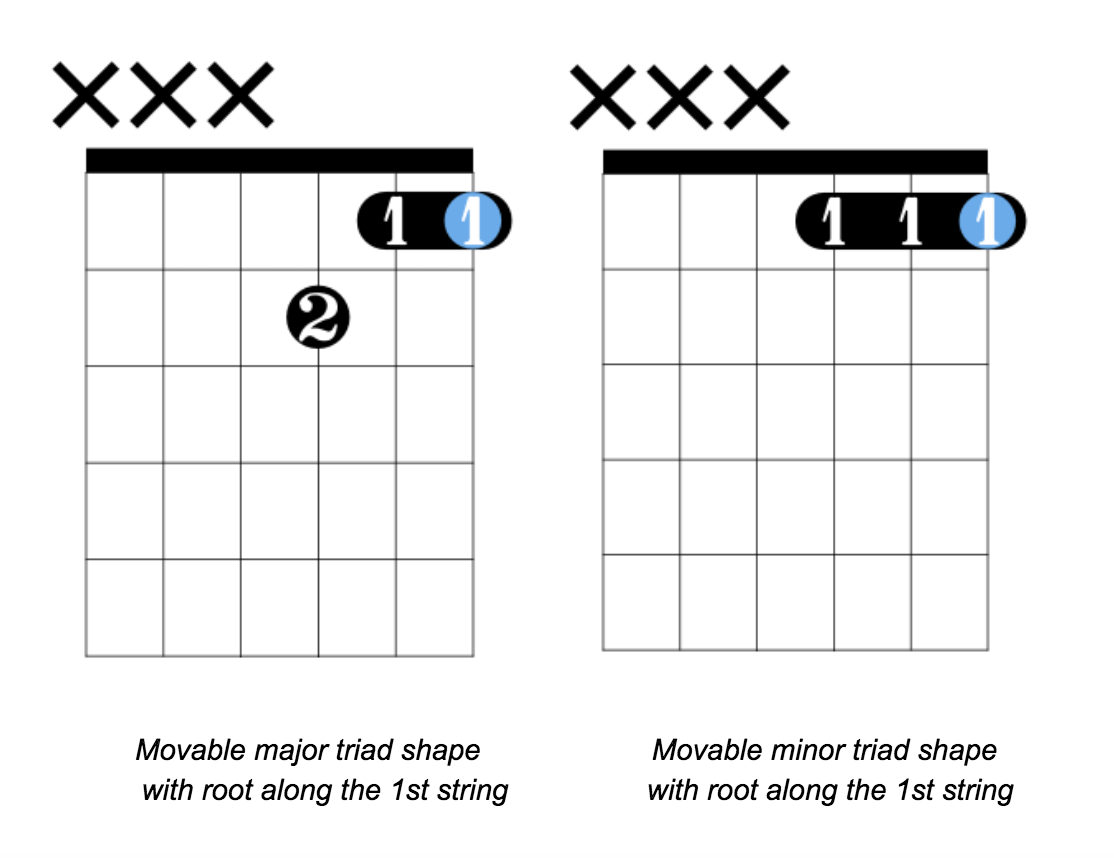 If the above triad shapes are new to you, then take a moment to familiarize yourself with them. Once you feel comfortable with those shapes, take the common chord progression of C, F, Am, G, and try to revoice it using those triads. As you will have three different voicings to choose from for each chord in the progression, there is more than one correct way to revoice the progression. Transcribed below is an example of simply one way to play these chords using those triad voicings.

Off The Beaten Path

Try practicing this offbeat strum by counting “one-and-two-and-three-and-four-and”, then strumming the chord of your choice time you say “and”, and leaving your guitar silent each time you say a number. Once you have the offbeat rhythm solid, there are a couple more embellishments needed to really ska-it-up. First, make sure that each strum is a quick, tight upstrum. There is very little downstrumming in ska. Secondly, make sure those upstrokes are short and clipped with no excess ringing out. Some may know this kind of strumming as staccato strumming. Now try putting all of that together.

Once you feel comfortable incorporating these staccato upstrokes into your offbeat strumming, revisit the chord progression of C, F, Am, G using the triad shapes on the top three strings. Putting all of those variables together, you should be playing something along the lines of this (although the exact choice in triad voicings is up to your discretion):

On the downbeats, you can create a scratch tone by loosening your grip on the neck to the point that the strings are no longer pressing against the wood of the fretboard, thus muting them. Once the top three strings are so muted, strum down. Then, press your chord shape against the fretboard as you normally would when fingering a chord shape and strum up on the offbeat. Continue to do this, slackening your grip and down strumming on the downbeats and tightening your grip and up strumming on the offbeats. If you do so correctly and in time, you will create a solid eight-note rhythm that alternates between scratches on each downbeat and staccato chords on each offbeat.

Practice this technique until you feel comfortable with it, then try applying it to our above chord progression. Altogether, it should look like this:

Congrats, you’re doing it! You’re playing ska! Try looking up the chord charts to some of your favorite ska songs and apply exactly what you learned here to those charts. While there’s obviously more to ska guitar than only what is discussed here, it should be enough that chances are that what you play is going to sound quite a bit like what you hear on the record.

Also, if you’re new to the genre of ska and are looking for some places to start your listening, here’s a little selection of essential ska through the ages!