Very little sounds quite as cool as twin lead guitars playing in harmony, whether it’s being done by bluesy southern rock bands such as The Allman Brothers and Molly Hatchet, early metal bands like Judas Priest and Iron Maiden, legacy surf bands like The Ventures, modern metal bands like Darkest Hour, or any of other great acts to have implemented the technique.

Often nicknamed “guitarmony”, twin lead guitar lines can be used to both craft harmonies that are rich and elegant as well as harmonies that are dark and sinister, as can be evidenced by any of the groups mentioned above. Guitarmony can be performed live by multiple guitarists, or it can be recorded by as a little just one guitarist through use of overdubs.

Although any two guitars playing non-unison melodies together can be considered guitarmony, in this piece we are going to look at a specific kind of harmony called parallel thirds. Parallel thirds are among the most common kinds of guitarmony and have an instantly recognizable sound that you have likely heard many times before.

What Are Parallel Thirds?

Before we can really get into how to play parallel thirds, we’ll have to go over some quick terminology to make sure that we’re on the same page. If you already have a solid knowledge of music theory, feel free to skip ahead a bit. But anyway, here’s the terms that we’re going to need to know going forward:

And that’s it for the moment! Now let’s get into what parallel thirds actually.

In guitarmony, parallel thirds are when a second guitar part plays the same melody as the first guitar part, except one third higher. A third can be found by counting up two notes in the musical alphabet from your note, and then any applying sharps and flats, as appropriate. For example if your starting note is an A, you can find the appropriate third by counting up two notes in the musician alphabet, which brings us to a C-note. It will either be a C natural or a C sharp depending on what key we’re in, but we’ll get more into that later.

The Difference Between Major Thirds and Minor Thirds

Non-diatonic harmony is harmony that does stick strictly to the notes in one key. The advantage of using non-diatonic harmony is that you are not beholden to a particular set of notes, which gives you much more freedom in your choices. Additionally, if you find yourself in a position where you are unsure what key you are playing in or when dealing with an original line that already doesn’t stick to just one key, then non-diatonic harmonies may be your only option. 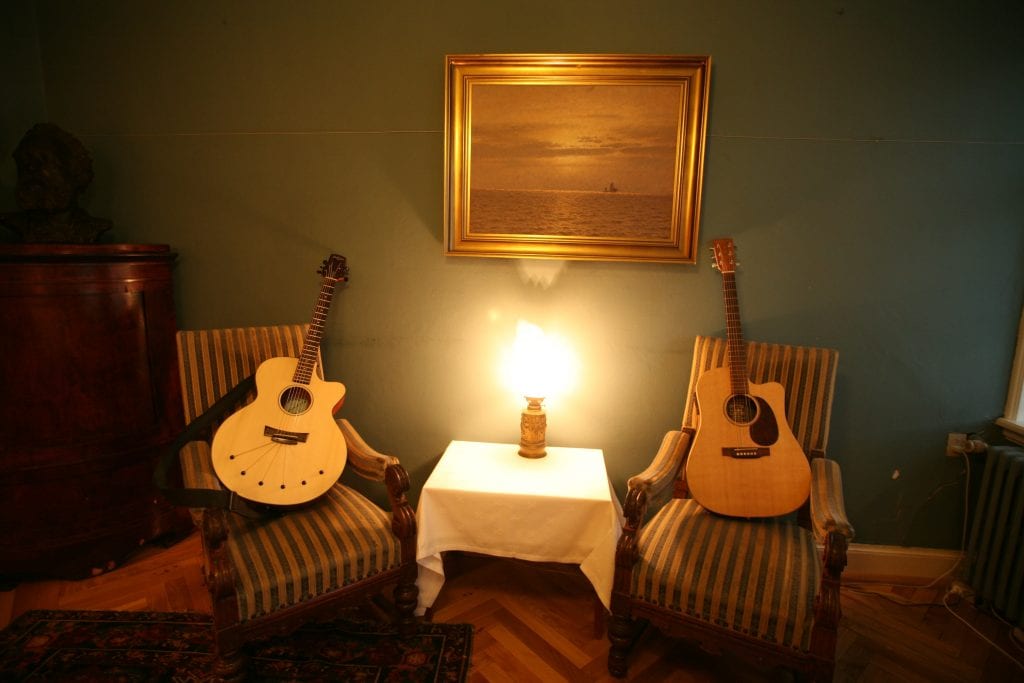 When writing a don-diatonic harmony using parallel thirds, you can use either major or minor thirds entirely at your discretion. This means that if we went back to our previous example of the A-note played on the 5th fret of the 6th string, you chose for your harmony line to be either a C-natural (thus playing a minor third) or a C# (thus playing a major third).

However, I would avoid playing a Cb in this instance. The Cb would be played on the 7th fret of the 6th string, leaving a distance of only two frets between the original note and the harmony note. This would create an interval in this situation called a diminished third, but is better known as a major second. While technically still a third, this interval does not have the harmonic quality associated with thirds, and would thus undermine the parallel thirds sound that we are trying to create with this exercise.

And here’s a non-diatonic diatonic harmony I came up with:

Harmonies go far deeper than just parallel thirds, but whether you’re using them to flesh out a cover or to create your own songs, they’re a great way to jump into the world or guitarmony!