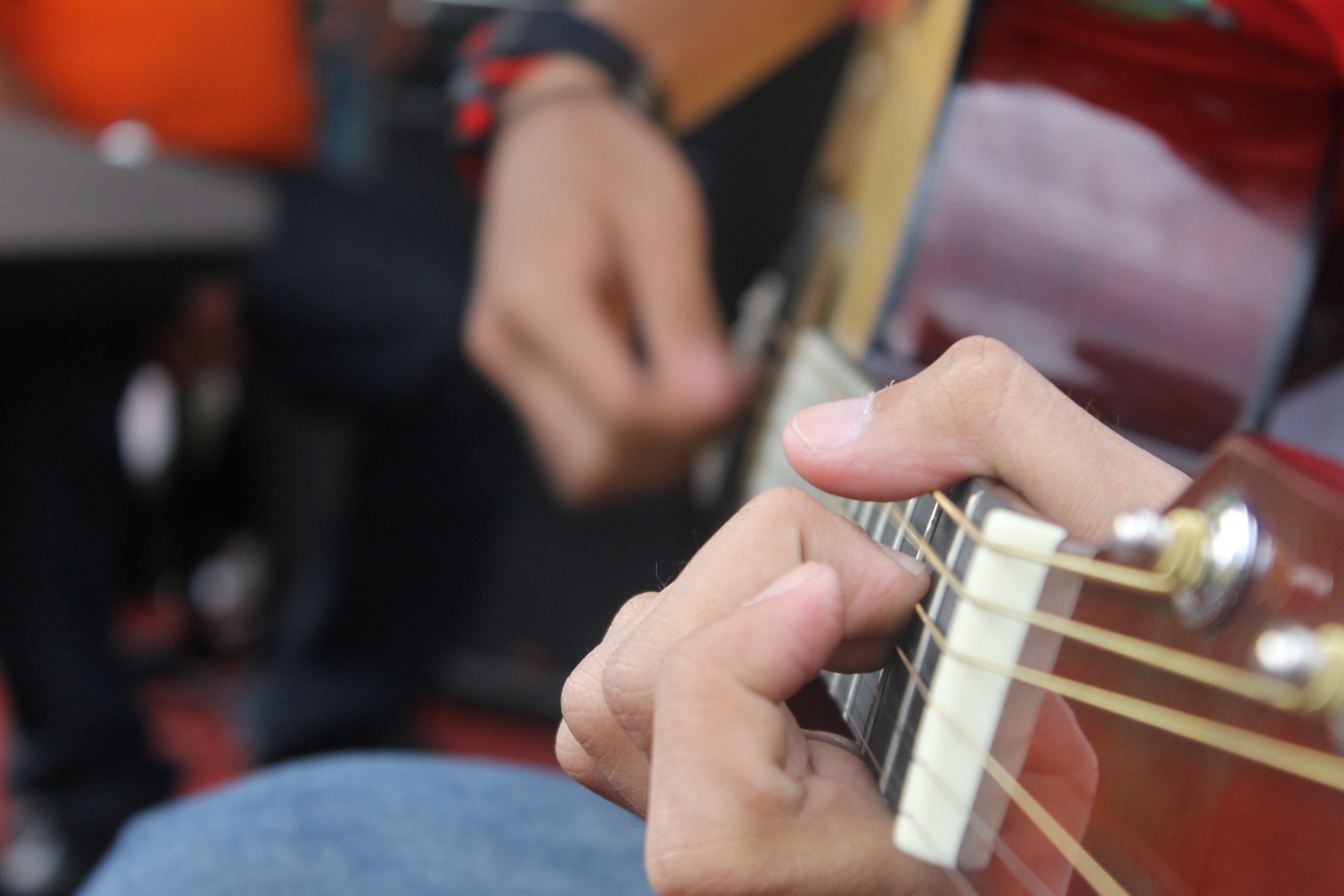 Building your own chords can be a great way to find new chords to incorporate into your guitar playing and songwriting, as well as make a fun exercise to practice your music theory skills. I find myself chord-building often, both when trying to find a new chord to put into something I am working on or just for fun when I’m sitting idly around with a guitar in my hands. The following is a step-by-step guide to building your own chords. It is written for an intended audience of guitarists with at least a basic understanding of music theory, but many of the concepts discussed here are applicable to other musicians as well.

When building chords, a great first step is to build a triad that will serve as the skeleton of your chord. Triads are little, three-note chords that contain the bare minimum amount needed to create a chord. Most chords you know that contain at least three unique pitches (so power chords are out) can be stripped down to the triad that serves as their foundation. Although many musicians use the term triad to refer to any chord of exactly three unique pitches, the classic definition of a triad is specifically a pair of stacked thirds. Under the classic definition of triads, the only proper triads are major triads, minor triads, diminished triads, and augmented triads.

This definition excludes the fairly common chord type called suspended chords, but three-note suspended chords have become pretty widely used by musicians in recent years and have a history of being used far before as well. The term suspended triad sees common usage nowadays regardless (with the sus4 variant traditionally referred to as a Georgian triad). Therefore, the use of suspended triads is entirely valid for the following exercise.

Pick one of the following triad types. This triad will serve as the foundation of the chord you build.

Once you’ve selected the triad you’d like to use, choose a root note to build it upon. It can be any note, so don’t spend too much time worrying about this detail. When you’ve selected the root note, build the rest of the triad off it. Figure out what the other two notes would be, and then find all three notes somewhere on your guitar. Find the notes on three different strings and on frets that you can reach, as this will form the skeleton of the chord you are about to create. Don’t get too bogged down with committing to fretting choices now, because you can always adjust as needed later.

Once you’ve figured out the triad, the next step is to add some other notes into the mix. Any chord harmonically denser than a triad will have at least four unique pitches in it, but traditional six-string guitars can have up to six notes in a chord. In the following step, you are going to add specific on top of whatever triad you chose. As previously stated, you can add up three intervals to your triad, but not all combinations of six notes will be reachable on a guitar with ordinary human-sized hands without getting creative. The use of open strings and, especially, alternative tunings, can make just about chord possible, but if you’re hoping to stay in standard tuning some combinations simply aren’t possible.

While any note you can reach can be added to your chord (there’s nothing stopping you), there are specific chord tones that are much more commonly used in the world of popular music. These tones form the chords that you probably hear in a lot of the music you listen to. Below is a chart detailing many of these chord tones. The chord tones in the chart below are labeled as they relate to the root note. You can feel free to use other intervals as well, but the intervals below are all great places to start.

As you probably noticed in the above charts, the last two chord tones listed are higher versions of smaller intervals. They are written this way to conform to standard chord names, but I’m going to advise you not to worry about what octaves you place the chords you choose. An E-note is going to function harmonically as an E, whether you play by plucking your open 6th string and play it on the 12th fret of the 1st string.

So when finding the notes you picked on the fretboard, your main considerations should be convenience and timbre. The first priority is making sure that you are able to reach all of the notes you’ve chosen. If you find multiple ways to reach some of your chosen notes, then you can feel free to take your pick. Notes will have different timbres when played on spots on the guitar, and rearranging the order of the notes within a chord can greatly affect the sound of the voicing. Also feel free to repeat any pitches as you wish, which can serve both to make the chord shape more easily playable and to beef up its sound a bit.

Example: I’m going to add a seventh and an eleventh to the chord (and no, this is not product placement). Since my root note is an A, the seventh is going to be a G# (just because my triad is minor doesn’t necessarily mean that my extensions have to be as well) and the eleventh is going to be a D. Based on where I placed the notes in my triad, I can conveniently find a G# on the 13th fret of the 3rd string, and a D on the 12th fret of the 4th string. This  results in the following completed chord shape: 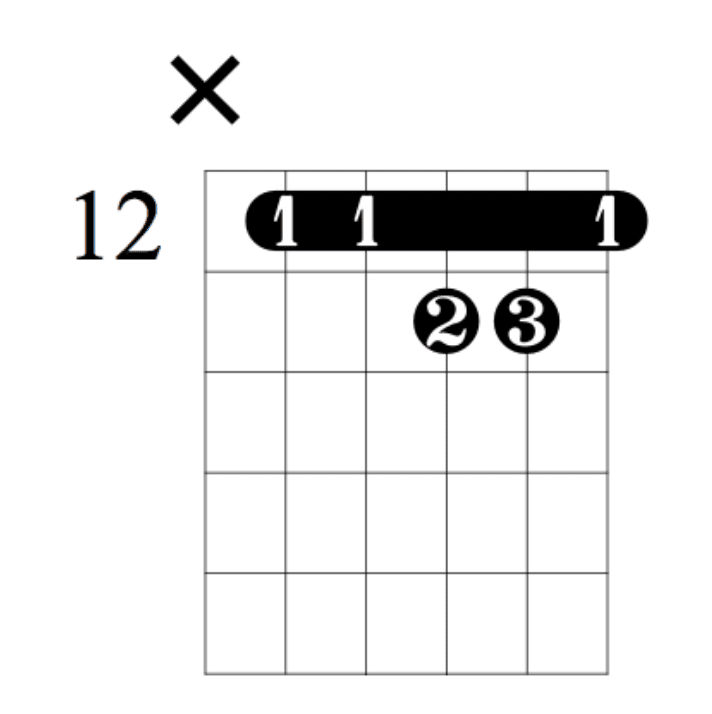 Once you’ve built your chord and determined how you want to voice it, the final step is to figure out what it’s called. While it may not seem important, figuring out the proper name of a chord can be useful for a few reasons. It allows you to communicate what chord you are playing with other musicians, it’ll help if you to jot down a progression you wrote that uses the chord, and it will potentially help you to understand the musical context of the chord you created and how to use it with other chords.

Naming denser chords, particularly less common ones, can be somewhat of a nebulous process. This is largely because certain combinations of notes can sometimes spell multiple chords, all of which are valid names for the chord. Therefore, choosing how to name the chord you created is largely determined both by musical context and how you yourself are thinking about the chord. That being said, there are two pretty surefire ways to determine the name of the chords you create.

The first strategy is generally the simplest. Start by taking the name of whatever triad you chose. Then add the names of the extensions you chose. You’re probably not quite done yet, but you might be. If all you added was a sixth, then simply add the number six to the triad you chose, and you have your chord name. If you chose just all added was an interval larger than a seventh, then the name of your chord is the triad type, the word add, then the added interval (for example, Dmadd9).

If all you added on top of your triad was a seventh (either major or minor), then consult the chart below to find the name of your chord.

The second method isn’t quite as systematic, but can sometimes be the more helpful of the two. For this method, write out all of the notes in your chord on a piece of paper. Then look over the notes you’ve written out and try and find any pattern of stacked thirds you can. If you find a pair of stacked thirds that starts on a note other than the root note you previously selected, then you’ve found a second triad that you accidentally created when adding extension notes to your original triad.

This happens more than you may think, and sometimes you will create combinations of notes where it makes more sense to use your accidental triad than your intentional one. If this happens, figure out what all the remaining notes are to your accidental triad, and then name your chord by more or less following the rubric above.

Example: In my chord, I added a major seventh and an eleventh to an A-minor triad. Therefore, I could call my chord an Am(maj7)11 and be done with it. However, I can also deconstruct the notes in my chord to A, C, E, G#, and D. When I do this, I can spot that C, E, and G# form a C augmented triad. A is the sixth of C and D is the ninth, making my chord also a Caug6/9. Both are equally valid names for my chord, and the decision of which one to go with really rests on musical context and whether I feel like the A or the C is truly functioning as the root note.