A Guide To Guitar Picks

A Guide To Guitar Picks

While there is enough written about different guitars, amplifiers, and pedals to fill many libraries, picks are one of the pieces of guitar-oriented gear that are often overlooked. That’s unfortunate because not only are there so many varieties of picks out there to overwhelm just about anybody, but the nuanced differences from one pick to another can have a surprising impact on both your tone and playing. There are several key variables that determine the way different guitars picks will feel and sound, and in this piece we’re going to go through all of them one by one! 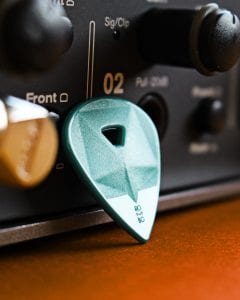 What a pick is made of is not only the most immediately noticeable things about it, but also one of the most important. The vast majority of picks currently on the market are from some sort of plastic, with nylon, acetal, and celluloid making for the three most common varieties, although there are some others to be found.

Nylon picks are soft and comfortable in your hand and produce a gentle, mellow picking tone. However, a potential disadvantage of nylon picks is how easily the material bends, which can pose a barrier to shredders and other players hope to achieve rapid-fire guitar picking. If nylon picks aren’t your thing, then acetal picks (sometimes referred to as derlin picks) go pretty hard in the opposite direction. Acetal is a very solid material that will stay perfectly stiff until just about its breaking point. This stiffness makes acetal the choice pick material for many players hoping to play at high speeds, and its punchy, brittle tone makes it a favorite of many hard rock and metal guitarists.

Celluloid picks offer a good middle ground between nylon and acetal, a fact that makes them the most popular material for guitar picks currently on the market. Celluloid picks are less bendy than nylon picks, but not quite as aggressively stiff as acetal picks, which makes them a comfortable choice for acoustic and rhythm-oriented guitarists who often play with traditional strumming patterns. Additionally, many players like celluloid picks for their bright, snappy tone.

While most modern guitar picks are made out of plastic, the standard material actually used to be tortoiseshell until the practice became illegal in 1973 due to animal rights concerns. This means that while genuine tortoiseshell picks are no longer available off the rack, vintage tortoiseshell picks can still be purchased if you don’t mind the effort of searching for them, the somewhat considerable cost when compared to most modern picks, nor mind plucking your strings with an endangered species. I wouldn’t blame you if any of those factors deter you, but if they don’t then a tortoiseshell pick can give your guitar a full, sonically rich tone that has made what tortoiseshell picks that have survived coveted items among certain guitarists.

Other pick materials that can be found include various types of stone, wood, metal, and even bone. These other materials are less common and are often more expensive, but each one has their own tone and feel unique to that material and are worth experimenting with if you ever get the chance. 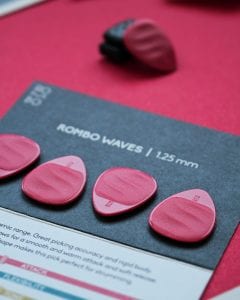 An important factor in guitar picks is how thick they are, and even a seemingly minuscule difference in thickness can greatly impact whether any given pick. But even with all being said, picks can still be broken up into three general categories of thickness: thin, medium, and thick.

Picks categorized as thin will generally have a thickness of between 0.40mm and 0.60mm, although they can in some rare cases be made even thinner than that. Picks of this size were at one point the standard, and are considered by some to be an essential ingredient for players interested in reproducing the sounds of vintage rock and roll from the 1950s and early 60s. Thin picks have a bright, treble-heavy tone and great clarity, particularly when strumming chords, and are a popular choice among primarily acoustic players. Medium picks have a thickness between have a thickness of between 0.60mm and 0.80mm, are a great middle-ground in both feel and tone between thin and thick picks.

Thick picks, sometimes referred to as heavy picks, generally have a thickness from between 0.80mm and 1.20mm, but are sometimes even thicker. Thick picks will give your playing a punchier tone with plenty of low-end. Additionally, thick picks will have less give and bendiness to them, which many technique-inclined players prefer. Thick picks tend to be preferred by players looking for a more aggressive guitar sound, and are a popular choice among both primarily electric players and bass guitarists whom prefer to use a pick over their fingers. 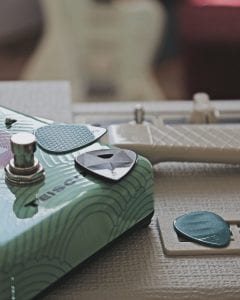 The last element of guitar picks we’ll be discussing is their size and shape. While picks are typically in the shape of isosceles triangles with a pointy tip, many other variations exist as well. The shape of a pick will mostly affect its feel more so than its tone (with the important exception being the shape of the tip of the pick), so when picking the size and shape of a pick your main concerns should be function and comfort.

Large picks don’t require as much precision to use and will give you an easier time strumming chords, but have the potential to feel a little clunky when playing leads and can make such advanced techniques as tremolo picking and string skipping pretty difficult. On the other end of things, smaller picks may require a bit more effort on your part when strumming big chords, but they make playing fast leads and other single-note lines much easier. In addition to size, the shape of the tip of a guitar pick is an important but generally overlooked detail.

The tips of most picks can be broken down into one of two categories: sharp tips and round tips. Sharp tips will give you a piercing tone with plenty of presence and are often seen on thicker picks, as those two variables tend to complement each other well. Additionally, sharper picks can greatly help with precision, which makes them a favorite of many soloists. Round-tipped picks have a softer, mellower tone that’s great for both strumming and acoustic players, but they not to grant the same degree of dexterity as sharp picks.

Other than the size and tip of a pick, other elements regarding its shape will mostly pertain to grip and overall comfort. When it comes to things like grip and comfort, the nuances become much more personal and really come down to what does and does not work for you, but at the end of the day, isn’t that true for all of this stuff?